The making of Oven Baked Potato and Zucchini Latkes

As the name says, this Oven Baked Potato and Zucchini Latkes are baked, not fried, and that's what makes them crisp, tender, and lower in fat.

And that's all good. Right? Right.

Choosing the right potato is important for these oven-baked latkes to turn out perfectly. Yukon golds are the perfect choice because they are designed to stand up to both dry and wet heat cooking methods. Its waxy moist flesh and sweet flavor make it ideal for boiling, baking, and frying but these potatoes will also stand up to grilling, pan-frying, and roasting. The Yukon gold potato has only been around since the 1960's when it was developed by G.R. Johnston and R.G. Rowberry in Ontario Canada.

A russet potato, with its starchy flesh, makes a perfect baked or mashed potato but makes a soggy latke.

So if you do have to substitute potatoes, get white rose or red new potatoes.

You can make these Latke gluten-free by substituting an all-purpose gluten-free flour, like Bob's Red Mill, a personal favorite, or make them Kosher by using Matzo Meal. The final amount of flour or Matzo you will need will depend on how well you drain the liquid from the potatoes, so be sure to give them some time to sit and liquidate!

Try these Oven Baked potatoes and Zucchini Latkes with a dollop of sour cream (low-fat or high-test, your choice) that has a bit of dill mixed in. Yum!

These Latkes are great with many different roasted meats such as: 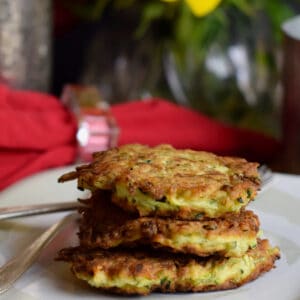