These skillet French fries are tender in the center, crispy on the outside. No soggy fries here. It's the double cook process that makes it work

Who doesn't love French fries? Especially one that is nice crisp on the outside, tender on the inside, hot French fry?

So last night, while I was making BBQ chicken sandwiches, using up some left-over roasted chicken from the weekend, I decided to make some. The old-fashioned way, in hot oil (I know, I know, but it’s not like I’m eating them every day). And since I hate buying kitchen equipment that serves only one purpose, like a deep fryer, because it’s just one more thing I have to find a place for, I used my good old (and I mean old) electric frying pan to make these delicious Skillet French Fries.

A brief history of the humble potato.

Did you know that the potato has only been accepted as edible in the western world for about 200 years? It’s true. Potatoes were found growing wild thousands of years ago by the Incas and they started cultivating them about 750 B.C. For the Incas the potato had many uses; it was a staple food, they used it to treat illnesses, injuries, and divination. Yes, they worshiped the potato; and when potato crops failed they had no problem giving up a few “human” sacrifices to appease the potato gods.

After the Spanish conquered the Incas, they took some of the tubers with them on their journeys. When Sir Francis Drake and his crew defeated the Spanish, he grabbed some for their journeys. Eventually, the potato found its way to England. It was not well-received (well, the cooks didn’t know what to do with them, so they cooked the tops and threw the taters out and well, that didn’t taste very good at all);  the Scots wouldn’t eat them because they could find no mention of potatoes in the Bible, so they deemed them “unholy”; horticulturist discovered they were in the same family as belladonna and feared them poisonous, and since one of the compounds in the potato could cause a rash, some thought they were responsible for leprosy. The Irish however, being in the middle of famine couldn’t be so picky or worried about what they ate. They found the potato grew very well in their countryside and climate. So they grew them, ate them, and loved them.

The potato arrived in Germany around 1588, but it was only fed to livestock and prisoners. It wasn’t until another famine in 1744 that King William ordered the peasants to plant potatoes to eat and threatened to cut off their noses should they disobey his orders.

Antoine Augustin Parmentier was imprisoned during the Seven Years War, and fed potatoes. When the war was over, he brought the spud to France and was determined to popularize the potato. He presented potato flowers to King Louis XVI, who put the flower into his lapel, the Queen, Marie Antoinette, put them in her hair, thus making the potato flower very popular as decoration with the aristocrats, but they still weren’t eating the actual potato. As a matter of fact, it was written by Legrand d’Aussy in the History of the Private Life of the French, “the pasty taste, the natural insipidity, the unhealthy quality of this food, which is flatulent and indigestible, has caused it to be rejected from refined households.”

But Mr. Parmentier was not swayed from his mission. He threw dinner parties where he would include potatoes in every dish. Then he planted a field of potatoes in the countryside. This field he had closely guarded all day long, but he removed the guards at night, knowing that the peasants would think that something that valuable must be very good. As expected the peasants did go in at night and steal the potatoes. Soon, potatoes were being planted throughout France and finally, after 150 years, were deemed “good enough to eat”.

Potatoes were introduced to America by the Irish immigrants, but again they were ignored. It wasn’t until Thomas Jefferson started cultivating them did Americans take notice.

Soon after their worldwide acceptance, someone, it’s debated who (the French and Belgium both lay claim to being the first) decided to drop a potato slice into hot oil; and thus, the French fry was born. American soldiers returning from WWI brought back with them a hunger for fried potatoes, and that’s how they were introduced into the US.

Skillet French Fries - or how to overcome the soggy potato

The problem with making a proper French fry is the sugars in the potato need to be turned into starches before cooking; otherwise, the outside turns brown too quickly. McDonald's did a great deal of research into perfecting the fry and found that if they allowed the potato to cure for 3 weeks, this took care of the sugar/starch problem. Ultimately, they went into the double fry method (used by Belgium for years) which is how I used to make them when I was a fry cook at Y’Not Burger in beautiful Perris, CA and how  I made them last night. 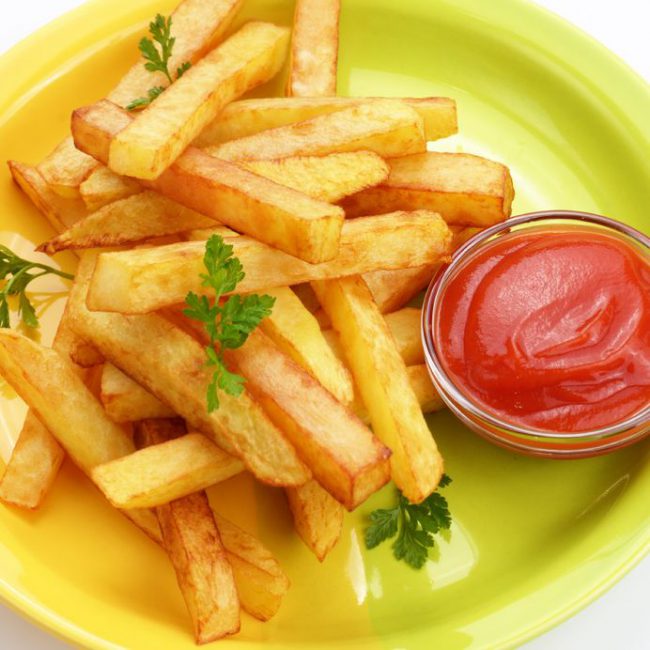 Serve these with some Homemade Ketchup! 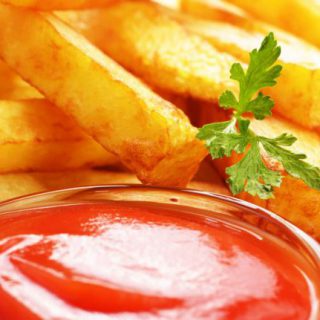 Helpful Equipment - an electric frying pan. Or a thermometer. REMEMBER - You need to let the potato sit between cooking. You can actually let them sit overnight in a refrigerator.
Keyword crisp french fries, homemade French fries
Tried this recipe?Let us know how it was!