I first wrote this recipe a while back and posted it on a site called Group Recipes under the name of SoSousMe. This was before I became LindySez, and since they wouldn't let me change my name on their site, I continued to post on both their site and my own. Now that I'm so SEO (Search Engine Optimization) savvy, I know not to do this. This is a bad thing, having the same title in more than one place. So live and learn. Part of SEO is, looking for ways to make your recipe title and search "unique". In doing so, I put Pretty Darn Good Chili Verde into Google and found...

Want more unique and delicious Chili Recipes? Try one of these:

Easy Homemade Spicy White Bean Chili - Made with white beans and chicken, both low-fat and delish!

Chili Colorado - the Red Version of Chili Verde. Actually, most Mexican restaurants use pork rather than beef, but I prefer beef.

Beef Chipotle Chili with Beer - A robust beef and bean chili made with beer - it's the perfect Tailgate party chili.

3-Bean Chili Con-Carne - Some new twists on an old favorite. 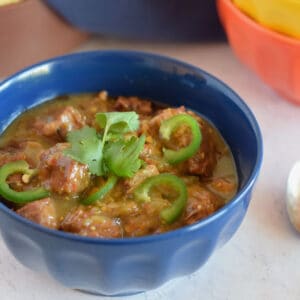