Beefy, spicy, bold, Beef Chipotle Chili with Beer is a great easy to make chili that will keep the whole family happy and warm on a cold winter's day

Behind the scenes of Beef Chipotle Chili with Beer

Yesterday was the Storm of the Century here in Northern California.

Well, that's what they called it anyway. And since it seems that we are generally blessed with little weather to speak of, it was the topic of everyone's conversations. Every news station talked about how to be prepared. Stores were crazy selling flashlights, batteries, water.

Floods, rising rivers, downed trees. The roads were a mess. Not only from nature but from all those driving on them. Sharing the road ... or not. Seems like half the people want to drive as if it's not raining cats and dogs with high winds, speeding at the same speeds they always do and the other half slow so far down slow that they are barely moving at all. And the speeders won't go around, and the slow-pokes won't pull over. Yes, sharing the road is not something that happens when it rains.

So rather than getting into my car for groceries and getting on the road with the wing-nuts, I decided to hunker down and make some chili for dinner. I had coarse ground meat, some bell peppers that really needed to be used up, and beans. So I planned to make my recipe for  3-Bean Chili con Carne.

As I sat watching the rain pounding down, I decided I wanted to make a new, different chili. And I decided that those bell peppers could wait for another use as well. I thought of heat, warmth, soul-satisfying deep rich chili. Chipotle chile, dark amber beer. And so I came up with Beef Chipotle Chili with Beer.

I don't drink beer on a regular basis. As a matter of fact, it's so irregular that I might safely say I have two beers a year, and I have those a sip at a time. Artisan craft beers are becoming big in Sonoma wine country. Almost as big as the wine industry itself. As such when we go to a brewhouse, I like to get a sampler, tasting the difference between amber, ale, and stout. They all taste so different. Because I wanted this chili recipe to have a deep flavor,  I chose a dark amber Mexican beer, Negra Modelo. I also chose to use chipotle powder rather than a chipotle in adobo, but I think you could use either equally well.

If using chipotle in adobo, I would use 1 chili (diced) and a tablespoon of the adobo.

Not being a chili expert (just a chili pretty darn good) I consulted a few cookbooks I own that are chili-centric. One book, Chili Madness is written by chili competitors and judge Jane Butel. She advocates not covering the pot when you cook chili, stating that covering the chili inhibits the development of flavor and texture.

So I left the cover off.

Did it make a difference?

Well, I will say that this recipe for Beef Chipotle Chili with Beer was one of the best chilis I've ever eaten. And my Texan-raised husband agreed, even forgiving me for using the unheard-of ingredients in a true Texas chili; tomatoes and beans. But I'm not sure it was the lack of a lid. And not putting the lid on did require more frequent stirring and adding of liquid, which, overall, dilutes the initial ingredients making you add more in the end. And no lid would prohibit this chili being made in a slow-cooker or crock-pot...so I would say, use the lid if you want. Cook it on the stove-top, in the oven, or in a crock-pot.

And of course, this and all chilis freeze beautifully. So make a big batch to enjoy today and in your tomorrows ...

Try this with some delicious Polenta Corn Muffins! 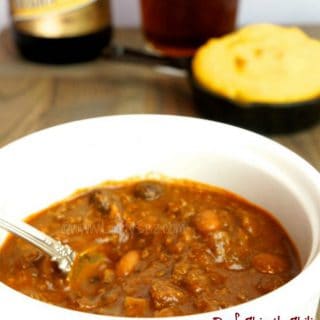 If using chilies in adobo, use one chile diced, with seeds, and 1 tablespoon adobo sauce.