Next time you want a snack, do what they do in Spain. Prepare these simple tasty Pan Fried Padron or Shishito peppers. Better than chips.

The story behind Pan-Fried Padron or Shishito Peppers

Padron peppers have been used in Spanish tapas for years. But now there's a new kid in town. The Shishito. Are they the same pepper? No, not really. But they are darn close and I think they can be used interchangeably. Especially for this preparation.

Cooking Pardon or Shishito peppers is simple and delicious

What's the difference between a Padron and a Shishito?

Both peppers are long, slender, and thin-skinned.

Both of them are generally mild, with Padron having a bit more spiciness throughout a batch, but still, neither one is overly hot.

As a matter of fact, I can safely say I have not had a "hot" one in any of the batches of peppers I have consumed, either at home or in a restaurant.

Padron, the Spanish version shows heat in about 1 in 20, with Shishito, the Japanese version claims heat in 1 in 10.

But they are tasty!

Where to find Shishito or Pardon Peppers?

Many farmer's markets carry them, at least here in Sonoma County, during the summer months. Some smaller or fine food markets with good produce sections will carry them when they are in season, but they are so easy to grow yourself that there is no reason not too. They grow very well in containers and a couple of plants will give you enough peppers to satisfy your pepper cravings. While some purists might insist they can tell the difference between them, I grew both this past summer and mixed and matched them as they became ripe noticing little difference in taste or texture. 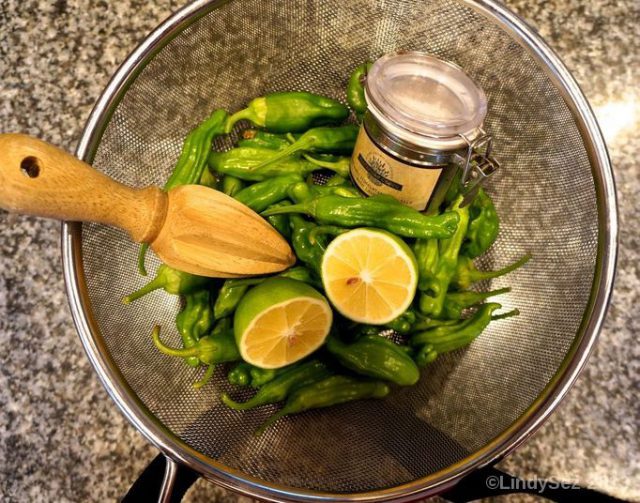 Everything you need to prepare Pan Fried Padron or Shishito Peppers

Cooking Padron or Shishito peppers is simple. Heat a pan over medium-high heat (this is a great time to use that cast iron skillet); add some olive oil, then add the peppers. Step back as they will sizzle and splatter. That's what happens when you add something that contains water to hot oil, old rule of thumb, we all know it…oil and water don't mix. But they do fry, so add the peppers carefully, and toss them using some tongs or by tossing them in the pan like a pro, then when they are nice and blistered and browned and collapsed, turn off the heat and squeeze some fresh lime juice over the top then sprinkle them generously with salt, preferably kosher or fleur del sel.

Grab an end and eat them right up to that end cap and stem, seeds and all.

So next time you crave a snack, put down the chips and have a bowl of Pan Fried Padron or Shishito peppers instead. 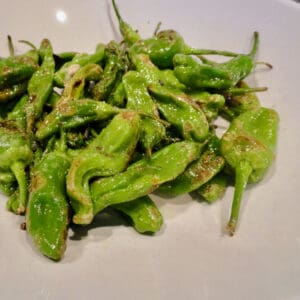