Home » Recipes » Gumbolaya or How to make the best Cajun Gumbo

Gumbolaya", a mix of Gumbo and Jambalaya, creates a stunning seafood chowder that's easy to make, low-cal, and delicious. Serve with plain steamed rice or try it with some Twice Cooked Brown Rice.

I wanted to make a seafood stew...dishy thing.

I thought of Gumbo and I thought of Jambalaya and both sounded like right up the alley of my thoughts.

So I did some investigation.

If you know me, you know I like to bring maximum flavor to the table, but I want to make it easy to get on the table.

I also want to get it on the table in a timely manner.

That timely manner is generally within an hour or less, in this case, it's the less.

"Dinner on the table in about 30 minutes."

But as I investigated both Gumbo and Jambalaya recipes, I found, they are really very similar.

What's the difference between Gumbo and Jambalaya?

One of the things I love about cooking, and developing recipes, is finding out about them.

Both of these recipes originate in Louisiana. Jambalaya is mostly influenced by Spanish and French cultures.

Gumbo is influenced by many cultures, including Spanish and French, but also German, West Africa, and Choctaw Indian.

Both use the basic "Creole" trinity of onions, celery, and bell pepper, both use the same meats, smoked sausage, chicken, and shrimp.

So what're the actual differences?

That's all that is different between the two dishes - well, except perhaps that Gumbo is the "Official" dish of the State of Louisiana.

Taking the samenesses and differences into account, I decided to call my dish Gumbolaya because:

A roux is simply combining equal amounts of fat and flour and cooking it until it's thickened and brown.

The depth of the brown depends on the dish and for Gumbo you want it to be very deep in color - almost red-brown.

Tips on how to make a perfect roux

This is how to make a perfect roux for gumbo or in this case Gumbolaya.

If you burn the roux, toss it out and begin again.

Once you've got the roux right, add the "holy trinity" sautée until soft, then the rest is pretty, binga banga boom.

What is the Holy Trinity?

The Holy Trinity used in Cajun and Louisiana creole cooking is a combination of chopped onion, bell pepper (usually green), and celery in equal amounts.

I prefer red bell to green, but usually use a combination of both.

You can use either white meat or dark meat chicken.

If you prefer to use dark meat, use cut-up boneless skinless chicken thigh, simmer the meat in the sauce for 10 minutes longer than the breast.

The sausage must be a smoked sausage.

While Andouille sausage is used most often, you can use kielbasa.

I used turkey kielbasa in my preparation. It provided the same meatiness, smokiness, and texture, but with much less fat and calories.

Shrimps may be large or small.

Shelled and deveined, tails off.

I happened to have some rather small shrimps, (70/90 count per pound) since these were the only size I could find that were wild-caught, and not from China or Vietnam where they are known to "inject" saline into the shrimp to up their per pound weight.

Do NOT buy those shrimp!

The small shrimps actually worked excellently in the dish as they were already "bite-size" and cooked quickly.

If you use a larger shrimp, cut it into bite-sized pieces.

So that is how I came up with my recipe for Gumbolaya. A perfect blend of two great classic Creole dishes - that are just so close - and yet...

What kind of shrimp should I use?


You can use any shrimp you like but I always recommend that you choose shrimp that are wild-caught. DO NOT buy shrimp from Indonesia, China, Thailand, or Vietnam as these are known to be raised in dirty shrimp farms and/or may be injected with saline to boost their weight.

Does the size of the shrimp matter?


Not really. Smaller shrimp 51/60 and medium shrimp 41/50 can be left whole after removing the shell, tail, and digestive tract (that dark vein you can see down the back). Larger shrimp, 31/35 and 26/30 should be cut in half for east of eating.

Do I have to use Andouille Sausage?


While Andouille sausage is traditionally used, I often substitute Kelibassa, either pork or turkey, in its place. Taking into consideration Gumbolaya's international influences, you could also use a dried cured Spanish chorizo (not Mexican) or Portuguese Linguica.

What kind of chicken should I use?

I have had a great deal of success using chicken breast also cut into bite-sized pieces.

If using thigh meat, simmer it in the sauce for about 10 minutes before you add the sausage and shrimp.

How do I keep my shrimp tender and not let them get all rubbery?


After your chicken is cooked, add the sausage to heat through. THEN add the shrimp and simmer gently until they just turn pink about 3 minutes total. Turn off the heat and serve.

The Holy Trinity is usually green bell pepper, Spanish onion, and celery. Can I use different vegetables?


I would stick to the original, but sometimes I use a combination of red and green peppers. You can use red onion in place of the Spanish yellow onion. Celery is celery. There is no substitute.

Need more inspiration? Try one of these "spicy" seafood dishes... 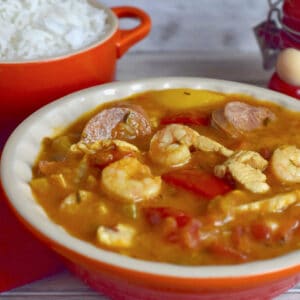