This recipe for Easy Tagine of Pork with Sweet Potato, Ras-el-hanout , and Preserved Lemon uses the pre-made spice mix to create the complex Moroccan flavors. No tagine? No Problem. Alternative cooking methods are included.

Why you should make this recipe

Combine the spice with sweetness, and, as in most tagines, dried fruits, and you have a taste sensation for your mouth.

Can I use a different cut of pork other than the tenderloin?

You could use tougher cuts of pork, or other cuts of meat, such as beef stew, but both of those would need to cook longer than the tenderloin. Tenderloin will be tender in about 20 minutes total, other, tougher cuts, might take up to an hour to get tender. If you decide on another cut of meat, be sure to cook it in the sauce until tender before adding the sweet potatoes and other ingredients.

A tagine is a conical cooking device used in Moroccan cooking, unique in that the top allows the condensation created by cooking to fall evenly back over the food.
Tagines come in different styles and use.

Some tagines are strictly for serving, and not meant to be heated or used for cooking at all. Many are clay versions, which can be used in the oven. Some clay pots allow limited stove-top use. Then there are those with bases that can be heated on top of the stove allowing you to brown and cook from beginning to end.

What can I use in place of sweet potatoes?


Sweet potatoes are one of those "superfoods" supplying amazing amounts of nutritional value. 214% of your daily requirement of Vitamin A, 50% of Vitamin C, along with magnesium, and many other trace elements.

Not all sweet potatoes are orange inside, as a matter of fact, you can find purple ones. Alongside sweet potatoes in the grocery aisle are garnet potatoes, and what is commonly called a yam, although it is not a true yam. Any of these can easily be used in this recipe. Even pumpkin or butternut squash could be substituted. Adjust your cooking time accordingly.

I can't find preserved lemons, what can I use in its place?

Can I make my own preserved lemons?

Yes you can. Preserved lemons are simple enough to make, although it takes time. Cut lemons tightly packed into a non-reactive container with enough salt and juice to cover them...then just let them sit and ferment for a few weeks, or months.

Can I add dried fruit to this Easy Pork Tagine?


This recipe also does not include the standard dried fruits often associated with tagine and Moroccan cooking. Apricots, dates, and raisins are very common. While not in the recipe per se, they could be easily incorporated. If you choose to add dried fruits, I would go with golden raisins or apricots.

What nuts could I use in this tagine?


Pistachios. Who doesn't love pistachios? Buttery, salty, fatty, rich. One of the oldest nuts used in history, pistachios is part of the healthy fats we need to include in our diets. If you don't want to use, or don't have pistachios, cashews are a good substitute. Whichever nuts you use, be sure to toast them!

I don't have a tagine and don't plan to buy one. What can I use in its place?


After having first made the error and purchasing an ornamental serving tagine, which is pretty useless except as kitchen decoration, I bought a Le Creuset tagine, with a cast iron base. This allows me to cook my entire recipe in one pot, start to finish. While not cheap, it is, in my opinion, worth it if you to want cook Moroccan food. There are cheaper full-functioning tagines in the market.

Should you neither desire another piece of kitchen equipment or think you won't use it often, then a Dutch oven will also work for this recipe.

So that's the easy tagine. Nothing to fear. Just good eats. On the table in about 30 minutes...

Try this with a side of simple steamed rice or try Twice Cooked Brown Rice.

Wine Recommendation: The Moroccan flavors of the dish pair well with lighter Spanish reds such as Grenache and Rioja. If looking for a white, I would recommend a Roussanne, from the Rhone or an off-dry Riesling from Alsace. A spicy German Gewurztraminer would also work nicely. 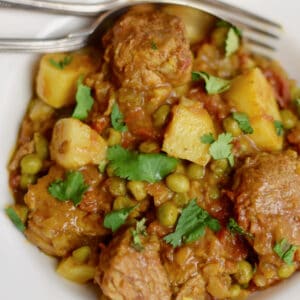 Swap out sweet potato for butternut squash or other type of yam Substitute preserved lemon for lemon zest mixed with coarse salt Substitute pistachio with chopped cashew Add golden raisin or chopped apricot if fruit is desired Ras el Hanout is a spice blend of over 20 spices.