"Don't let the list of ingredients scare you off, the spices add great flavor to the meat and this Lamb Vindaloo Stew is really easy to make. Once you add all the spices. Many "spice stores" now sell prepared Vindaloo spice mixes, but if you have what you need on hand, it's just as easy to make it yourself, and to your taste."

The Story Behind - Lamb Vindaloo Stew

"What do you plan to make tonight?"

Ugggg....sometimes I hate this question.

Why? Sometimes I feel as I've already made everything. There is no more food left to make. There is no recipe I wish to pursue. Put a fork in me, I'm done!

But only for a moment; and then my brain starts working. Filtering.

When that question was asked of me last Sunday, my answer was "Nothing, I'm not cooking, I'm not eating."

Although he has NEVER EVER said no to me when I truly feel like I don't want to cook and would prefer a pizza or dinner out, it was Sunday...we had just been to two business dinners out in a row...and well...o.k. so let me go see what I have.

That's what I had in the freezer. And all these beautiful HOT peppers, carrots, and fresh tomatoes are in the garden. So what should I do with them?

I loved the flavors of my Chicken Vindaloo sooooooo much, that I thought...why not?

Why not with lamb (if not a fan of lamb, use beef). But with the richness of the lamb, I wanted to do more.

My Lamb Vindaloo Stew is a combination of the spices that I used in my Chicken Vindaloo, but instead of dried I used fresh hot peppers. I also diced fresh tomatoes instead of using canned and added some fresh diced carrot, peas (frozen as my fresh were done a while ago), and just a touch of coconut milk.

And it was YUM! 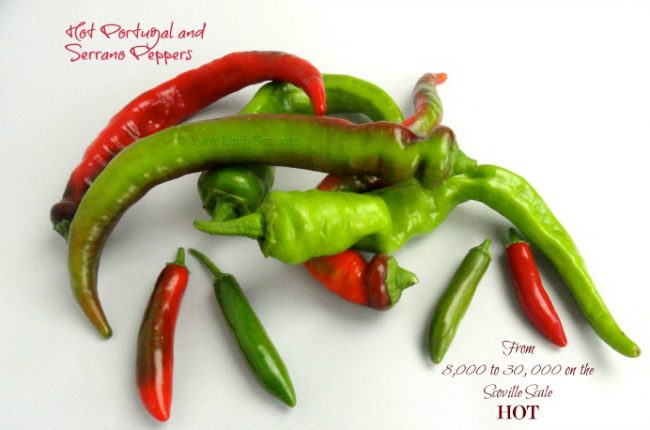 How about those peppers?

What is the Scoville Scale?

In 1912 a chemist, Wilbur Scoville, who worked for the Parke-Davis pharmaceutical company, developed a method to measure the heat level of chile peppers.

It was a dilution taste procedure where blended pure ground chiles were mixed with sugar-water and a panel of "testers" then sipped the solution, in increasingly diluted concentrations, until they reached the point that the liquid no longer burned their mouths.

A number was then assigned to each chile pepper based on how much it needed to be diluted before it could no longer be tasted or the heat is felt.

Flavorful mouth burn if you are not careful (a big reason that LindySez always says to taste your peppers first before adding it to the pot, so you know how HOT it is).

And of course, always remember, the membranes and seeds are the HOTTEST part, so if the tip is hot...do not add the seeds too.

In this new recipe for Lamb Vindaloo stew, I used two whole Portugal peppers, and two Serrano peppers, with only the seeds from one Serrano in place of the six dried chilies I used in Chicken Vindaloo.

It was spicy, but not overly hot.

I cooked my lamb vindaloo stew in a pressure cooker, but you don't have to. The directions include both pressure cooking instructions and just plain old stove-top. I did not do a crock-pot version, but as many of you know, I'm not a big fan. So if you feel like experimenting with that, and are confident in your abilities with the slow-cooker, then go for it.

However you cook it, your mouth will say thank you! 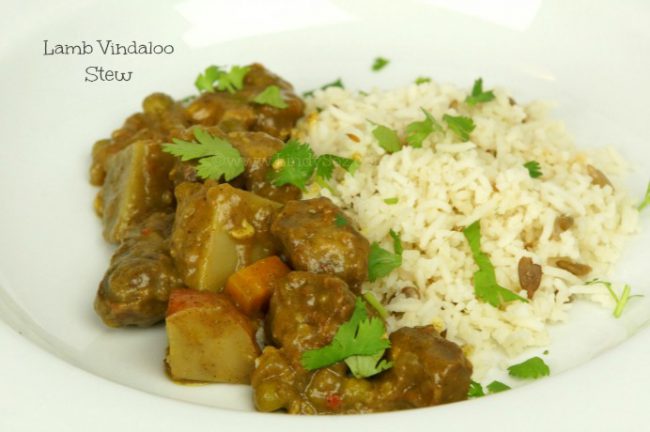 Now that I've done my part, coming up with the dinner and all; it's time for the HUBS

"What are you going to serve with this?" I ask

"UGGGGG, I hate it when you make these complex hard to pair with dinners" he responds. While the chicken vindaloo went lovely with an

While the chicken vindaloo went lovely with an off-dry Riesling, this Lamb Vindaloo Stew was deeper, richer, and had lamb in it. He finally chose a Garnacha; a Spanish wine that is fruit-forward and not too "hearty" or high in alcohol. He did good! It was perfect. 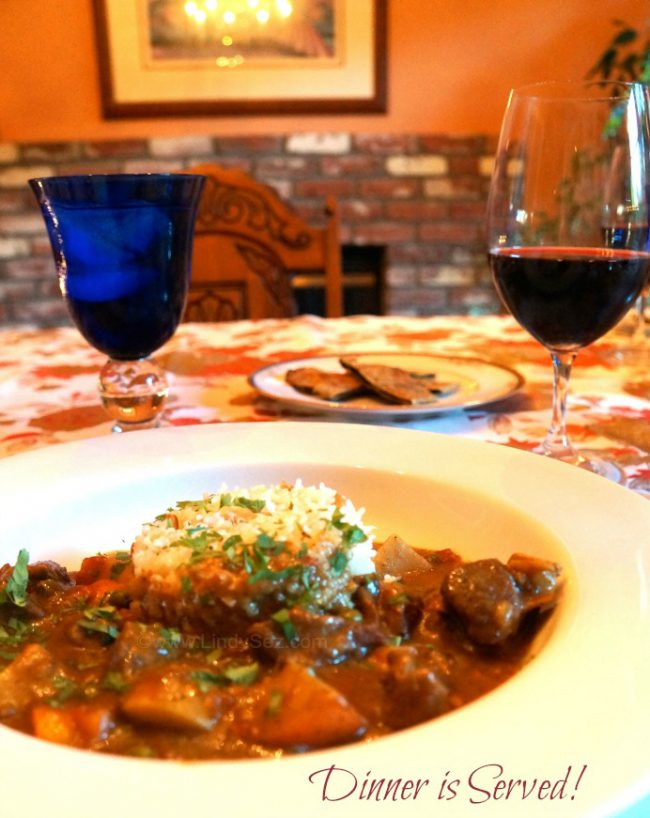 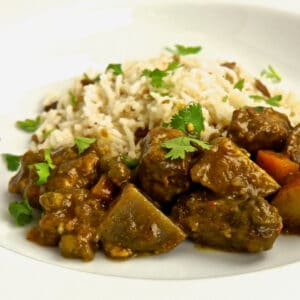 LindySez
“Don’t let the list of ingredients scare you off, the spices add great flavor to the meat and this Lamb Vindaloo Stew is really easy to make. Once you add all the spices. Many “spice stores” now sell prepared Vindaloo spice mixes, but if you have what you need on hand, it’s just as easy to make it yourself, and to your taste.”
5 from 2 votes
Print Recipe Pin Recipe
Prep Time 15 mins
Cook Time 1 hr
Additional Time 8 hrs
Total Time 9 hrs 15 mins
Course Lamb, Main Course, Soups, Stews & Chili
Cuisine Middle Eastern
Servings 4 servings
Calories 601 kcal

The cooking time and done time depend on how you decide to cook it, and how long you marinate the meat. It's in your hands!