“Boasting complex flavors, this recipe for The Best Chicken Vindaloo shows you the best and easiest way to put it all together”.

The making of The Best Chicken Vindaloo

Vindaloo, Vindaloo. Just the name is fun to say.

I've had Vindaloo in Indian restaurants before. A combination of meat cubes in a spicy sauce with chunks of potatoes is generally served with steamed basmati rice. But I never made it myself.

The other morning as I was doing my "homework" going through my Google+ communities to see what the other 250 gazillion food bloggers are cooking, photographing, and writing up, I came across a recipe for Chicken Vindaloo that sounded pretty darn tasty.

But, as always, I must find more recipes for Chicken Vindaloo. I must investigate various techniques. Because, as is with music, there are many ways to put the same notes together to come up with something uniquely different. And my job, as I see it, is to come up with the best, and simplest, preparation for any recipe I share with you, whether it's my own, or someone else's.

If you go on the internet, you will find many recipes for Chicken Vindaloo; from YAWN, boring, to YIKES, difficult. Some have you marinate the chicken, some don't. Make a paste with the spices, or don't. Add sliced onions, or pulverize them. It can be very confusing to find just the right recipe.

Until you found me 🙂  And this recipe for The BEST Chicken Vindaloo.

Vindaloo is the Indian offspring of a Portuguese dish, "Carne de Vinha d'alhos"  that was introduced when the Portuguese colonized India. The original Portuguese dish was made with pork, red wine, and garlic. The Indian people started adding more spice and peppers transforming this dish into something more curry-like. They replaced the wine with vinegar to give the sauce a sweet and sour taste. Potatoes were added at one point, probably to make the dish more cost-effective, less meat, more food, but many curries of India contain potato so it may be a cultural thing. As time went on different meats were used including lamb and chicken. A Vindaloo is traditionally served with Naan or rice. And once you taste this delish sauce, you will know why you want something to sop it up!

As I read, I jotted down the major elements of any recipe I liked. I liked the marinating of the meat. Marinating adds flavor. I like flavor. And since the marinade uses vinegar in it, it also changes the texture of the chicken, just like the buttermilk brine does for Simply the Best Fried Chicken. Instead of adding the spices at varying times throughout the cooking process, I put them all in the marinade, right at the beginning.

Done. Wipe hands on a towel. Put spices away. 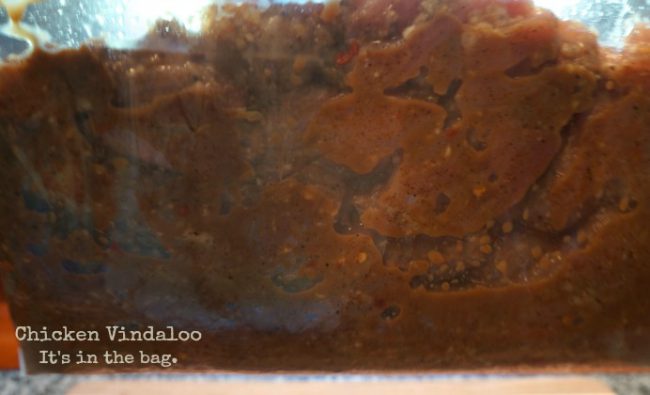 My favorite way to marinate anything. In a zip-top bag.

I also prepared the onions two ways, one is pulverized and included in the marinade, the second way is to dice and lightly brown them. I think this adds a great depth of flavor and natural sweetness allowing me to omit the need to add sugar.

There are a lot of spices in this dish, and you can use them to varying degrees to achieve your personal level of taste. The finished dish, as written, was spicy, but not overly hot. While we were eating I mentioned to Brian that I just wanted to keep on eating and tasting. The complex flavors jumped to all the taste buds on my tongue. It was so good, I couldn't wait to have it again for lunch. And the great part about spices, they add flavor, but not calories!

Really, it was the best Chicken Vindaloo or Vindaloo I've ever had.

So try it soon. And as always, let me know what you thought of it. Comments and shares are appreciated. 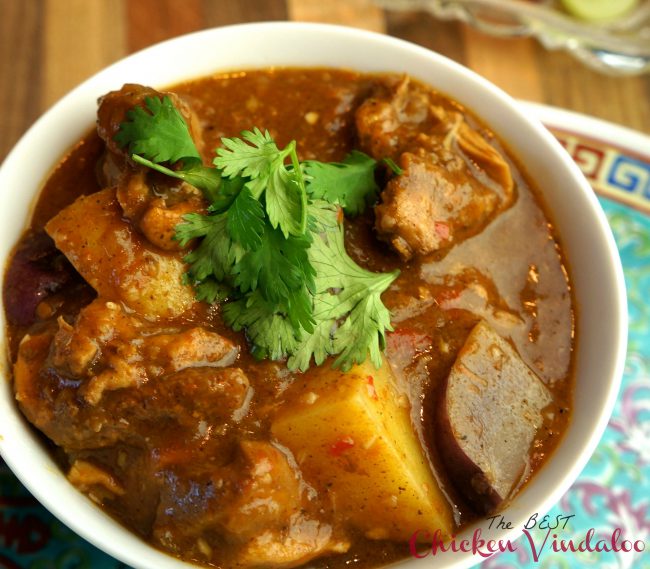 LindySez: Don't forget the marinating time. Allow at least 4 hours.
Keyword spicy chicken, vindaloo
Tried this recipe?Let us know how it was!