This recipe got its start as I was modifying my recipe for "Gail's Turkey Tacos" - one of our favorite post-Thanksgiving meals, to Goose Tacos - using up left-over Christmas goose.

Because goose meat is gamier than turkey meat, I decided to bold up the flavors with the addition of some chipotle chili and using beef stock instead of chicken stock.

And the more I thought about it, who the heck has left-over goose meat anyway? 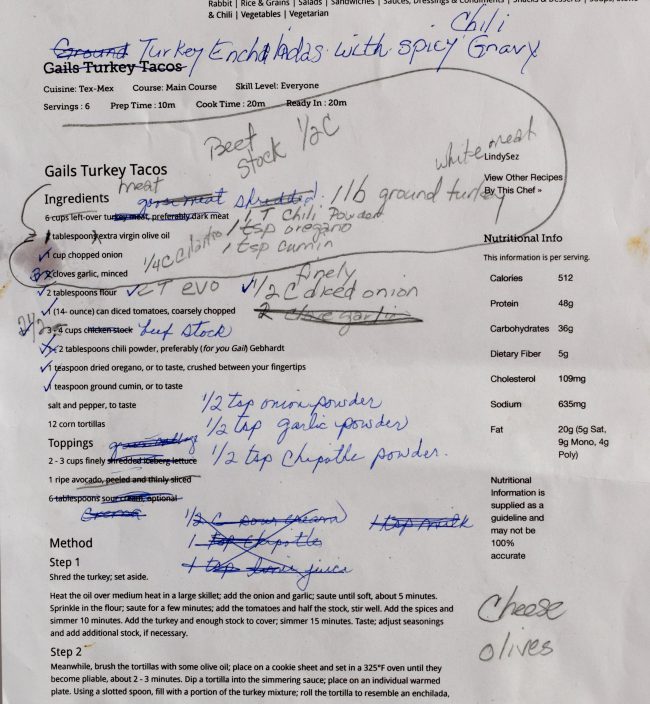 In the world of food writing, it is generally understood that you are hard-pressed to come up with completely unique ideas all the time and many food bloggers will take someone else's recipe and change - let's say 3 ingredients or a technique - and call it their own.

I'm going to go out on a limb here and say, this is my recipe originally, and now it's my new own recipe for Turkey Enchiladas with Homemade Chili Gravy.

Although many commercial enchilada (chili) sauces (gravy) contain tomato sauce or paste, in the home of my husband and his Tex-Mex mom, chili sauce was to be only chili. NO TOMATO allowed.

But since they were included in her recipe for Turkey Tacos, and since I did make the mistake of combining two recipes, I was able to get tomatoes into my sauce and with the blessing of my husband - as he claimed this is "the best sauce ever".

25 years of marriage. Some things take longer than others and allowing tomatoes into the chili gravy is one major milestone.

Another, of course, is beans in chili. Which I do as well, with my recipe for Beef Chipotle Chili with Beer. Also a new family favorite, and yes, he eats it with the beans.

Start with some very well-flavored lean ground turkey. Try to find ground turkey that is no more than 7% fat per serving.

Then we make a very flavorful chili gravy.

I call it gravy, you can call it sauce. I remember, as a child, my brother claimed he "hated gravy" and would only eat sauce. So my mother would tell him that the sauce was in this half of the gravy boat, and the gravy was on the other side. He would dutifully take his sauce from the sauce side of the dish. So whatever you want to call it, it's good.

As I said, I used tomatoes in this sauce. And while a lot of commercial sauces do use either tomato sauce, or paste, I find these to be too thick and too tomatoey.

So I like to use diced tomatoes, in their juice, which I quickly blend with my hand-held blender so the tomatoes are almost totally integrated into the sauce. This makes for a tomato sauce that is actually rather watery. If you were to use tomato sauce, thin it 2/1 with water, and if you decide to use tomato paste, go for a 4/1. Otherwise, I think the tomato would overpower the chili elements of the gravy. 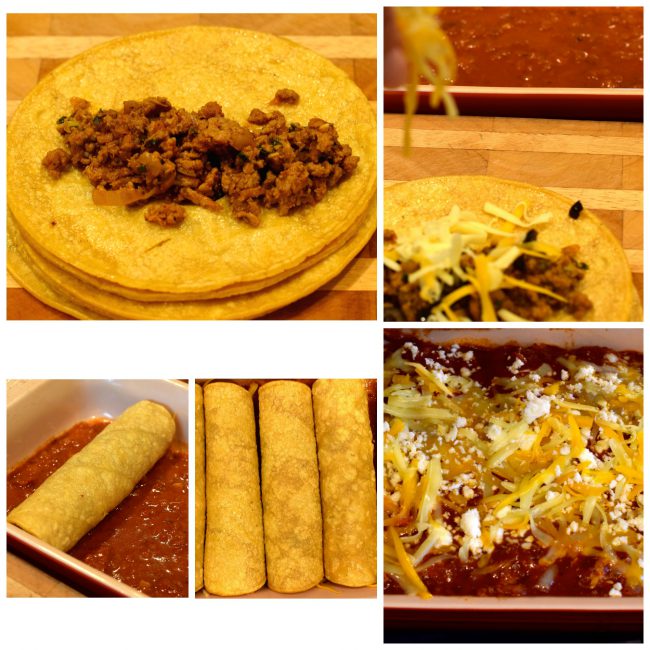 I spray my corn tortillas with cooking spray and place them in a 325º oven, for about 3 minutes or until they are soft and pliable.

Many recipes have you "dip" the tortilla in the sauce to soften it, but I find this makes for a soggy enchilada, so I prefer to heat them with a bit of oil. Then stack them to keep them warm as you work with them.

On each tortilla I place a nice amount of the well-seasoned meat, add some chopped black olive, optional, but we like it that way, a bit of cheddar and jack cheese, and then roll them up and place them in the pan.

You want to use a casserole dish that will comfortably hold the enchiladas but without a lot of space around them. Once they are all filled and in the pan, spoon the rest of the sauce over the top and up the temp of the oven to about 375º and cook, covered, for 15 - 20 minutes, then uncover and top with a good amount of the cheddar/jack combo along with the cotia, if using, and bake about 10 minutes more, or until the cheese is melty good and the sauce is hot and bubbly. 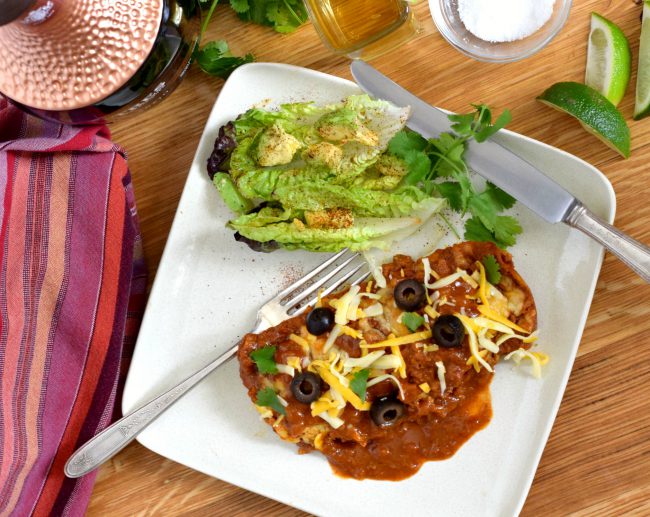 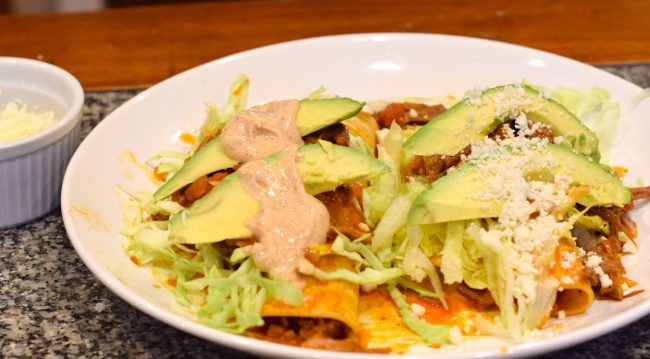