This recipe for Smothered Pork Chop is so easy with a yummy gravy. Just like mom used to make with onion soup mix, but without all the sodium 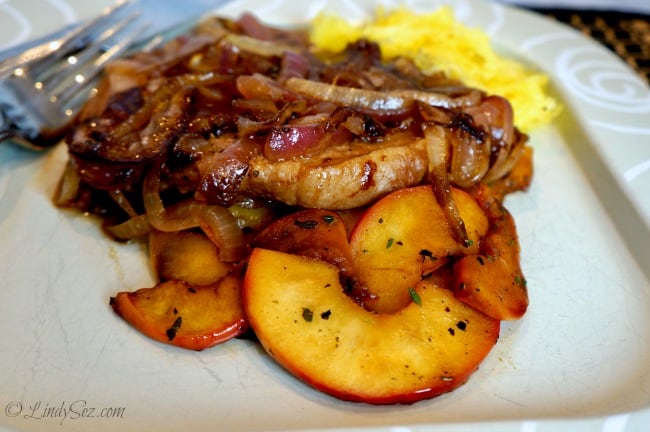 The making of Smothered Pork Chop with Apples

When I was growing up, my mom used to make a great easy smothered pork chop dish.

Like so many in the day, I'm sure she got this either off of the Lipton onion soup box, or Good Housekeeping magazine. She would put pork chops in a baking dish and pop them into the oven and let them brown for about 15 minutes. She would mix a packet of Lipton onion soup mix with about ½ cup of red wine (I'm pretty sure the wine was her addition and NOT in the original recipe) along with 2 cups of water, pour that over the top then let them cook for another hour or so. Dinner was ready. Tender pork chops served with a tasty onion gravy. Applesauce was a common accompaniment.

In my home, Dad was King. He earned the paycheck, he got the first choice of chops and if there were any left after mom and each of us kids got ours, he had first right of refusal for anything left on that platter.

Meat was usually packaged with six pieces; there were five of us in the family, so yeah, that meant dad got two pork chops and we all got one. Mom always made extra rice, or noodles, or potatoes and this is where the yummy gravy really came into play. So seconds consisted of starch of the day, covered with gravy.

I almost didn't even miss the pork chop. Almost.

I still LOVE rice with gravy. Or noodles. Or mashed potatoes.

I followed my mom's recipe for years until I started doing nutritional analysis' and found out how much sodium was in the soup mix. YIKES. My version has all the flavor, with only 367mg of sodium. Mom’s way had the flavor, but 1218mg of sodium.

A video showing how to make Smothered Pork Chops

When making this recipe for Smothered Pork Chop, you can use any kind of onion you like. Sometimes I use all yellow onions, sometimes I use a mix of red and yellow. And sometimes I add in some sweet Vidalia. More or less, whatever onions I have on hand. Adding red wine is also an option, although I love the taste of it, you might not. So feel free to add more beef broth in its place.

Applesauce is a great accompaniment, but I prefer to sauté fresh apple slices with a little bit of fresh thyme. The apples are tender but firm and add a nice bite of sweetness. 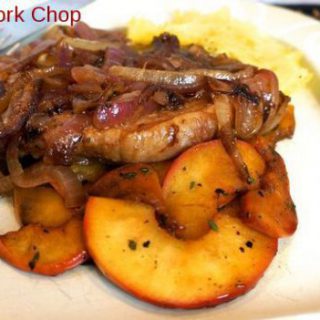