This recipe for Instant Pot Country Captain Chicken is a cinch to make in your instant pot or slow cooker. Set it and forget it while all the lovely Indian flavors cook and mingle creating a delicious low-fat meal.

A year ago, BB gave me an Instant Pot* for Christmas.

Yes. He often buys me cooking items for Christmas. And most times I don't object to the object he gives. And this was one of them.

What is an Instant Pot?

To clarify, he gave me a multi-function "Instant Pot".

The brand he bought was not even the "Instant Pot" brand, but a Fagor multi-function pot.

It is a combination of every pot you have in your kitchen - practically. It's a slow cooker, pressure cooker, rice maker, and risotto maker.

But no one is going to Google Fagor Multi-Function pot so, just like we used to call a copier a Xerox or a facial tissue a Kleenex, I called my multi-function pot an Instant Pot®, however, as it appears from comments, some of y'all only have a single-use Instant Pot, one that is just a pressure cooker.

I have one of those too, I call it a pressure cooker...so just note, this recipe for Instant Pot Country Captian Chicken is intended for a multi-function self-contained cooker that offers slow-cooking as an option.

Of course, I'm going to give you more options, so keep going even if you don't have an "Instant Pot".

BB thought it would be good in my kitchen as, while I do use my pressure cooker a lot, I rarely, if ever, use the slow cooker (formerly known as a Crockpot).

The main reason for not slow-cooking in the slow cooker is, that I find at the end of the day, everything in the cooker has lost its individual taste and texture.

Plus, I like to brown my ingredients before adding them to a slow cooker, which requires another pot or skillet.

Well, if I'm needing another pot or skillet, then I may as well brown in my Dutch oven, put it into the oven oven, and cook long and slow with low-oven heat.

Turns out better that way in my opinion.

Or, conversely, just speed everything up and use my pressure cooker. Stews are done tender in less than an hour.

But an Instant Pot has a browning function eliminating my need for additional cookware.

Why my Country Captain Chicken Recipe is Best!

So I started experimenting with slow-cooker recipes using the Instant Pot.

To my cookbooks, I go, looking for recipes that would work well with the Instant Pot - as a slow cooker - when I came upon a recipe for Country Captain Chicken.

Reading through the ingredients list I thought, this sounds right up my taste alley and could easily be converted to a slow cooker and especially the Instant Pot as the opening ingredients need to be sautéed.

Armed with the idea for a recipe, I then on to do my due diligence - looking and reading at least 5 more recipes of the same name and then deciding what I do like and don't like about each one, then adapting the components to create the most delicious, easiest to prepare, Instant Pot Country Captain Chicken meal I can.

And I do this all for you. Because I love you. You're welcome.

Country Captain originated in India as a poultry or game recipe involving onions and curry.

The dish, known as one of the first Anglo-Indian recipes, was introduced by seamen to the southern United States. One theory is that an early 19th-century British sea captain, working in the spice trade, introduced the dish to the American South via the port of Savannah.

The "country" part of the recipe's name dates from when the term country referred to things of Indian origin instead of British.

It is therefore assumed the term "country captain" would have meant a captain of Indian origin or a trader along the coasts of India.

Others claim that the word "captain" in the title is simply a corruption of the word "capon" which may have been used in the dish.

Are there many variations of Country Captain Chicken?

Although generally, they all include chicken, curry powder, and raisins or another dried current, along with almonds, some, including mine use tomato and bell pepper.

I found many recipes online that included bacon.

While I'm not sure this is an original ingredient; and while I love bacon, I find bacon can take over a dish, and for this reason decided not to use any.

Another variation of my recipe is replacing the raisins with mango chutney. While there are no raisins in chutney, I find it added a "depth of flavor" that I could not replicate otherwise.

If you want to add raisins to the dish, go ahead. About ¼ cup should be sufficient.

Do I need to use dark meat chicken?

As I said in my ingredients list, dark meat, legs, and thighs, work best for this dish. While you could use breasts, I would not cook them as long as the dark meat otherwise it will be very dry.

Should I remove the skin before cooking?

Yes. For two reasons. The skin contains most of the fat and calories, and it is good when fried crisp, but when stewed, as Country Captain Chicken is, it just turns flabby. Leaving some of the fat on the meat is fine, but you can easily scrape it off with a paring knife.

Of course, while the name says Instant Pot, there is more than one way to create this delicious dish.

Country Captain Chicken is a perfect blend of sweet, spicy, hot, sour. Traditionally served with white rice, I decided to pay homage to the "country" portion of the dish and served with Basmati rice. It just adds a degree of nuttiness.

But if you prefer not to be a nut, try it on Twice Cooked Brown Rice. Or try it on cauliflower rice.

We tested, for your benefit, both a light red and white wine with this dish and found both worked very well due to the heartiness of the sauce, and the Indian flavors. Try with a Rhone-style red or Alsace-style dry Riesling for a great wine pairing. 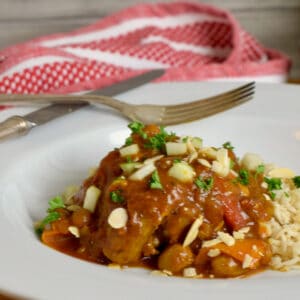 *Cooking without an Instant Pot

If you don't have an instant pot, no problem. You can either sauté the ingredients in a small skillet on top of the stove, then add to the slow-cooker OR microwave the onions, pepper, tomato paste, curry powder garlic, oil, thyme, paprika, and the cayenne in a microwave-safe bowl, stirring occasionally, until the onions are soft, about 5 minutes total (set for 2-minute intervals) and then add to the slow-cooker.

No Instant Pot OR Slow-Cooker?

Use a Dutch oven with a heavy lid. Heat the oven to 325°F. Make the recipe as done for the instant pot, then place in the oven to cook for about 1 ½ hours. If you prefer a longer cook time, take the oven temperature down to 250°F. and cook for 3 hours. Pressure Cooker Make the recipe as written, bring it to a simmer, and cover the pressure cooker. Bring to pressure and cook for 1 hour. Use the natural release method.