"Quail marinated then grilled with a deliciously sticky glaze makes this recipe for Grilled Quail with Pomegranate and Orange Glaze finger-licking good."

The Story Behind Grilled Quail with Pomegranate and Orange Glaze

This recipe for Grilled Quail with Pomegranate and Orange Glaze was inspired by a recipe in Evan Goldstein's book Perfect Pairings. Evan is a Master Sommelier and has been nominated four times for the James Beard Award "Outstanding Wine and Spirits Professional of the Year". You could say, Mr. Goldstein knows his wine. He also knows his food and has a joint relationship with major chefs in a few eateries.

The recipe I found, Pork Loin Glazed with Pomegranate and Orange, was written by his mother, Joyce Goldstein,  who was the chef/owner of Square One Restaurant (since closed) in San Francisco. She has authored a number of cookbooks and is well known in the culinary world.

I first met them at Fleur De Lys (also since closed) in San Francisco when BB, who then worked as VP of Sales and Marketing for the San Francisco CVB,  and I were having dinner with Joyce Goldstein, Journalist Burt Wolf, of Burt Wolf Travel on PBS,  BB's boss, John Marks, then President/CEO of San Francisco CVB and his lovely wife Marty. We were all talking and enjoying our amuse; a silky cold asparagus soup served in an eggshell (sorry no pictures, this was WAY back in the olden days when we didn't take pictures of our food. I know, can you even imagine?) - and this guy turns to us and starts telling us what wines we should be having with our meal.

I didn't know it was Even - talking to his mom. Needless to say, the wines he chose went perfectly with each delicious course Chef Keller prepared for us. I do miss Fleur De Lys ...

this recipe is finger licking good.

Anyway, the reason I was looking in the book for a recipe is; we were having a friend and his son come for dinner. Phillipe and his son had just come down from attempting a hike to the summit of Mt. Rainier and were coming this way to check out some colleges. As Phillipe deals in French wines, BB challenged me to come up with a perfect pairing for a French Burgundy. Being familiar mostly with California Pinot Noirs, and not so much with the wines of France, I thought I would do some research and found this recipe which I thought would be a great match. But I didn't want to do a pork loin roast and thought with two guys just coming down off the mountain, quail would be a good choice of protein. It was. 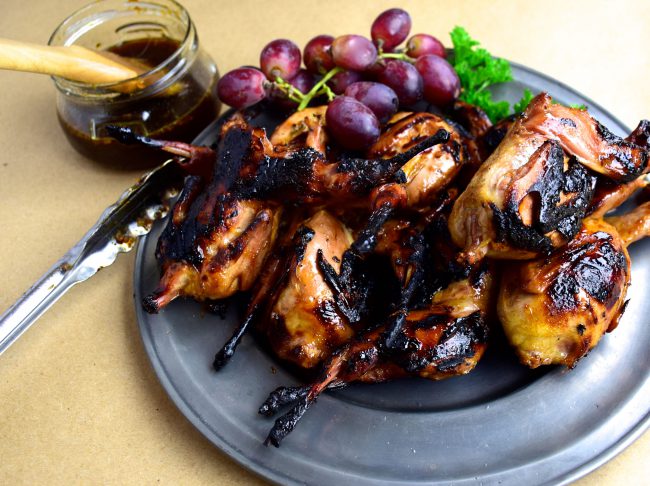 Quail is a great little bird to eat. They are small, mild in "wild" flavor, low in fat and calories, and cook quickly - 2 per person is the perfect amount. You can cook them whole, as I did, or spatchcock them - that is remove the backbone and open it up. I left them whole so they were more "manly".

The flavors in the rub and basting sauce were perfect for bringing out the flavors in the wine. Pomegranate brings out the fruit, orange highlighting a bit of acidity making them perfect partners. Soy, ginger, and mustard are natural friends; Pinot Noir is known to be good with Asian foods, and the honey puts a nice glaze on the bird. You do need to take care when grilling as the honey will also burn quickly, so I suggest when you grill the quail, start without the glaze. Get them almost cooked, then start basting them and let the glaze caramelize on the quail.

the quail do have to marinate for at least 6 hours, so plan accordingly.

These were so good that even the boy who wouldn't eat or try hardly anything that was served declared these ..." Finger licking good". Yes, he might venture out onto the highest mountain peaks, in snow, wind, and rain, but not so adventurous in the kitchen. 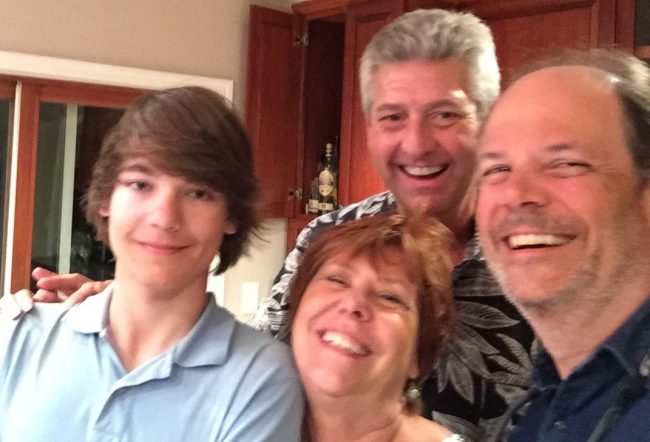 No, they didn't make it to the summit of Mt. Rainier. The weather, as it is prone to do near the summit, got so bad, winds so high, that they were forced to return to base camp. A great adventure that they will just have to try again. 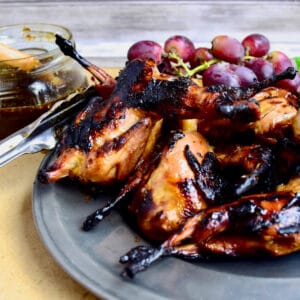 This recipe requires 6 hours to marinate. LindySez: If you don’t want to use quail, you could substitute Cornish game hen or chicken pieces. If you do it with game hen, do spatchcock them.  **Pomegranate syrup and/or molasses can be found in Middle Eastern markets and some specialty stores. If you can't find it, you can make something similar by reducing pomegranate juice over high heat until it becomes syrupy.
Keyword BBQ, quail, wine-pairing
Tried this recipe?Let us know how it was!