"I made Spanish Tortilla - My Way. A little Spanish, a little Quichey, and with a whole heck a lot more flavor!"

The making of Spanish Tortilla - My Way

I don't like to toss food, even if it is to the chickens or the compost, so I decided to use them up and make some of Lindy's Family Potato Salad to go with some of The Bested Most Tenderest Ribs Ever.

I had six large russets; and with only BB and me at home, I certainly didn't need to make that much potato salad, so I boiled them all and used four in the salad leaving me with two to go.

So now what should I make?

The next morning was Sunday and as you may already know, BB and I like to enjoy a leisurely, fairly late in the morning, brunchy kind of breakfast, with some bubbles.

I kept thinking about crisp potatoes on the bottom of a quiche-like dish. But with the potatoes already cooked, I felt the crisp part would be lacking. Then my brain went on our trip to Spain.

And the display cases filled with edibles like Spanish tortillas, olives, bread stuffed with prosciutto and cheese, pizza squares (no they do not do the typical pie in Spain, they make their pizza on a square cookie sheet and cut them into squares)... sold cold or hot, your choice.

I also remembered BB telling me when he lived in Pamplona, he loved the tortillas, hot or cold. So I thought that's what I'll make, a Spanish Tortilla.

In doing some investigation into what exactly that was, I was a little disappointed in what was the flavor department. Pretty much you deep-fry potatoes in olive oil until they are soft, remove them from the oil, mix up some eggs, add salt and pepper and fold the potatoes into the eggs, then pour into a pan and cook; place under the broiler and done.

So I made Spanish Tortilla - My Way. A little Spanish, a little Quichey, and with a whole heck a lot more flavor and by using already cooked potatoes - a lot less fat.

I decided to use my handy trusty cast-iron skillet. Did you know that a properly seasoned cast iron skillet is as good as your chemically sprayed Teflon pan? Well, it is. 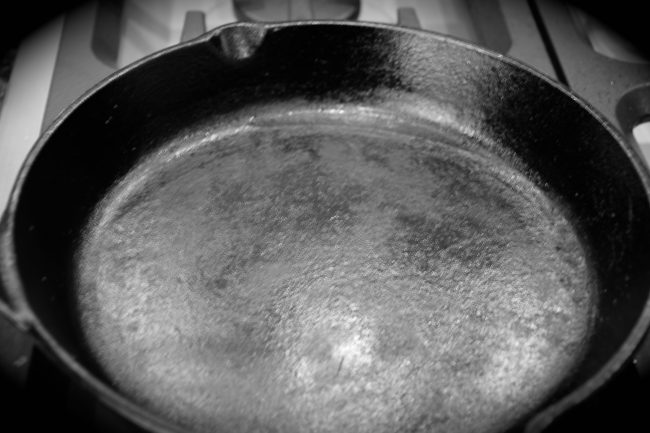 The Care and Feeding of a Cast Iron Skillet

The key to using and caring for cast iron is simple - keep it seasoned. My mother has used cast iron for as long as I can remember - and still uses them today at age 92. She said that when she can't lift them anymore, then she's going to just stop cooking.

She had to re-season her pans once, and she was none the too happy about that. My ex-husband, TR, and I moved in with my parents for a short while after he was released from the Air Force, while we looked for a new place to live. TR has never been a sit back and do nothing kind of guy, and his new job had not yet started, so he thought that he would be totally helpful and do something useful around the house. He found mom's pans in the kitchen. Dark as night, black and shiny. Dirty he thought.

So he cleaned them.

Cleaned them good as the day she bought them.

She was less than happy. Much less.

Don't clean your pans so they look new. At least not your cast iron pans.

I rarely use soap on mine and always put them directly on the stove to dry over high heat. Then, using a paper towel, I rub a little olive oil over the surface. Once cooled, they are as good as non-stick to use.

The pans are not the reason we divorced. Well, it could be a part of it. He was a little "persnickety" not only about clean but HOW to clean. Felix Unger. Yep, Felix Unger.

Anyway, back to my recipe for Spanish Tortilla - My Way. 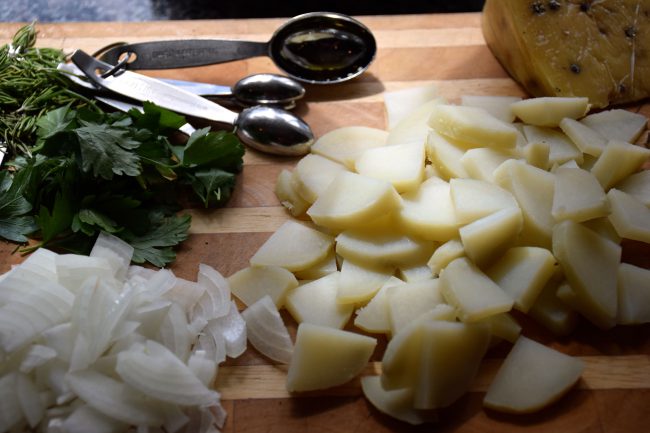 I started with some chopped onion which I sautéed in some extra virgin olive oil mixed with a little ghee or clarified butter until they just began to brown. 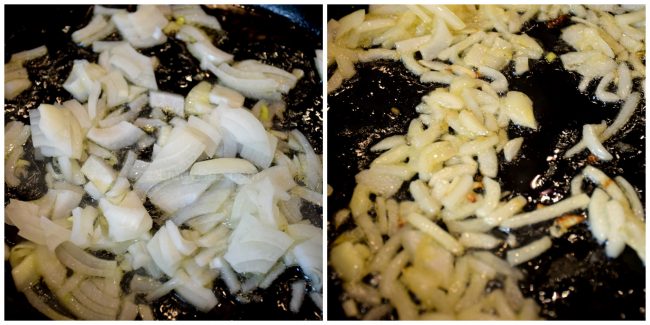 Then I added the potatoes along with a good pinch of salt and freshly ground pepper, which I also just let begin to brown. But not too much. 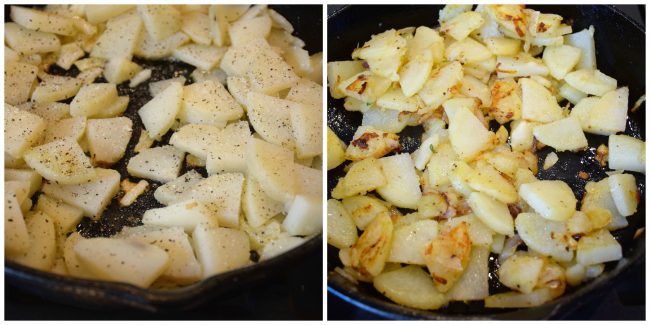 To the eggs, I added a bit of a local dry jack cheese, Pepato, which is studded in black peppercorns, so good. If you can't find that you could use another semi-dry cheese such as Manchego or Asiago, along with some cream, a bit of finely minced rosemary and parsley. Now we are talking flavor town!

I poured the eggs over the potatoes and gently stirred them into the mixture. 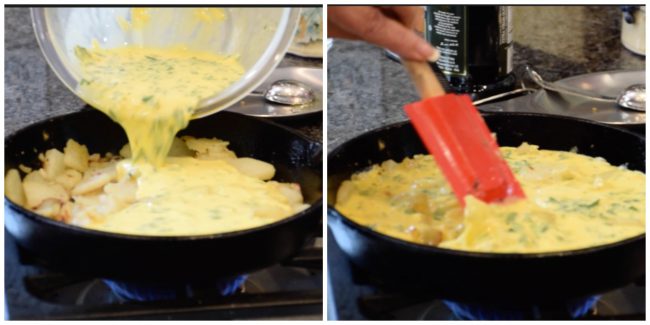 Using a rubber spatula, I gently lifted the eggs and potatoes from the edge allowing the raw eggs to seep under; when the eggs were firm but not cooked through I placed the pan on the top shelf of a 350º oven and cooked it for about 5 minutes, or until the eggs were completely cooked and then turned on the broiler for about 3 - 5 minutes to brown the top. Watch this closely so they don't burn cause it happens fast!

And then, binga banga boom. 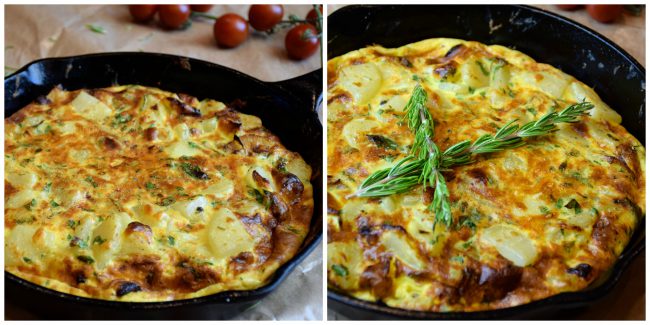 I loved loved loved the way this turned out. Onion and potatoes, nestled into fluffy creamy eggs along with the subtle flavors of rosemary and parsley shining through. And it was easy too. All you need is...love. 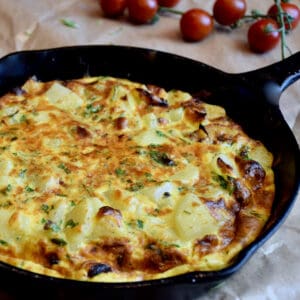 LindySez: Another plus of using cast iron pans is heat retention. You could make this Spanish Tortilla a half an hour in advance and it would still be warm. Serve the tortilla hot, warm, or at room temperature.