My adventures with Biscuits and Sausage Gravy began, but where else, in the South. While on wine travels with BB.

BB, at the time, was a Hilton man. And each and every Hilton offered their premier members free breakfast in the club (at least those that had clubs).

Generally, it was a buffet breakfast of the usual suspects, scrambled eggs, bacon or apple sausage links, some fried potatoes, along with cereals, both hot and cold, fresh fruit, bread, rolls, you get the breakfast buffet idea.

But at this Hilton, there were a couple of new, as yet, unseen, buffet additions.

Next to the hashed brown potatoes was a crockpot that contained Grits. Made from boiled cornmeal, they are usually served with copious amounts of butter and are a staple for a Southern Style Breakfast.

And sitting next to the scrambled eggs was another new addition, Biscuits with Sausage Gravy.

Hot damn, I am going to try these out now. It turns out these were really well-made, delicious, Biscuits with Gravy.

They all aren't so lucky.

In Search of the Perfect Biscuits and Sausage Gravy

From that point on, whenever I see Biscuits and Gravy on a menu I order it. Even if it is just a "side" with just 1 split biscuit topped with a copious amount of gravy, which is certainly enough for me to see what's up.

A Great Biscuit Base

One of the first things I learned about making great biscuits and gravy is, you have to start with a great biscuit.

I had soggy biscuits, doughy biscuits, hard biscuits. The best biscuit for a sausage biscuit is a light, tender, biscuit. At least I think that is the best biscuit. So I found a recipe that makes a Tender Buttermilk Drop Biscuit. It is the perfect base for this equally simple savory sausage gravy.

The Sausage Party of the Gravy

This is, after all, sausage gravy, so naturally, the sausage part of the program is important.

First the DO NOTS:

And now for the DO'S

I like to use Farmer John Classic Pork Links and I'll tell you why. They have a breakfast sausage flavor that I have enjoyed for years and years, and that makes them comfort food.

They are very quick to defrost, unlike a big lump of ground breakfast sausage. Put them on a plate and in about 10 minutes they are soft enough to crumble.

Portion control. I figure 2 sausages per person. So when it's just BB and me, I use 4 links. If I have more people, I add links @ 2 per person. Simple easy measure.

By using a few special techniques, one being patient, making the gravy is a pretty simple process.

After "greying" the sausage, greying is just cooking the meat until the sausage is no longer pink but not browned, you cover it with the flour. Add the flour to the meat slowly allowing it to stick to the meat as you stir it in. You want to end up with a fully floured sausage with very little flour on the bottom of the frying pan.

Now you start adding your milk. The recipe calls for 2 - 3 cups of milk, so start slowly adding 2 cups, stirring constantly, and being patient to see how thick the gravy gets. This process can take up to 10 minutes. If you see the gravy is too thick, add more milk. When the gravy is as you wish, stop.

I have tried this recipe with half and half, whole milk, and 2% low-fat milk. I have never in my life used fat-free milk. If I want to cook with water, I'll use water.

The best results, a creamy rich gravy without being too rich, came from using 100% whole milk. Half and Half was too rich, and I thought 2% was a little thin, but if you are looking to save some calories, 2% will work.

Keeping it on the Savory Side

Throughout my biscuits and gravy adventures, I have had gravy that was more like a salty flour roux with some sausage dropped in for good measure, to some that were so rich, two bites and done, to who thought to add that much Louisiana hot sauce?

The best ones, of course, are a well-balanced ratio of sausage to a creamy flavorful gravy. And I think I nailed it with my recipe for Simple Savory Sausage Gravy.

The base of the breakfast sausage, with some additional heat coming from the spicy Slap Ya Mama* spice mix, which can be found in almost all grocery stores, along with a pinch of dried thyme and sage brings all the flavors together. And don't forget to use a copious amount of freshly ground black pepper.

*If you don't have Slap Ya Mama you can substitute a mixture of cayenne pepper, season salt, and garlic salt.

Can you freeze this Simple Sausage Gravy?

Yes, you can. freeze leftover sausage gravy. Cool it to room temperature, put it into an airtight container, and put it in the freezer. It will hold nicely for a few months when frozen. Or, once frozen, put it into a seal-a-meal bag, and it will keep nicely for at least 6 months. Or more.

Thaw frozen sausage gravy in the refrigerator overnight. Reheat slowly on the stove-top adding some additional milk as you reheat it to get it back to the consistency you desire. Be sure to taste and adjust the seasoning after reheating it as the additional milk will dilute the flavors.

So give this southern classic of Simple Savory Sausage Gravy served on Tender Simple Homemade Buttermilk Drop Biscuits a try and you'll be saying y'all soon! 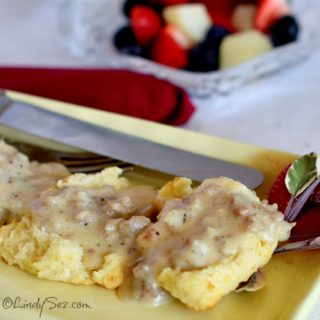