Fresh spring leeks shine in this simple spring leek risotto. So easy to make in either your pressure cooker or instant pot - creamy risotto on the table in about 10 minutes time. . 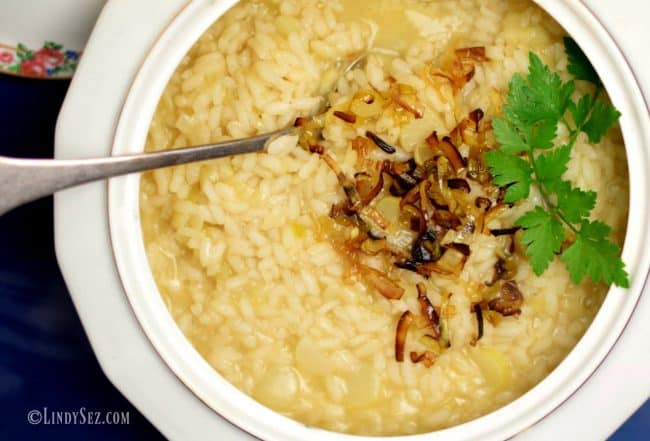 The Making of - Spring Leek Risotto

Spring is in the air, so to speak. It's standard spring day here, cloudy, grey and cold. But the Farmer's market is getting in some good springtime produce, and leeks are one of my favorites.

Spring Leek Risotto one of my 7-minute risottos, made in the pressure cooker; or instant pot, but you can make it in the traditional add and stir way. (To find out how, here is the basic, and traditional recipe for Risotto Milanese.)  Any way you make it, it's good.

Being as it is from the onion family, leeks hold many of the same health benefits as other allium vegetables.  Their unique combination of flavonoids and sulfur-containing nutrients, these vegetables belong in your diet on a regular basis. There's research evidence for including at least one serving of an allium vegetable in your meal plan every day.

By using them two ways in this Spring Leek Risotto, you get both the mellow leeks flavor in the rice, and then the rich leek flavor in the caramelized version to finish the dish. This final addition tastes so rich - it's the umami in your mouth. 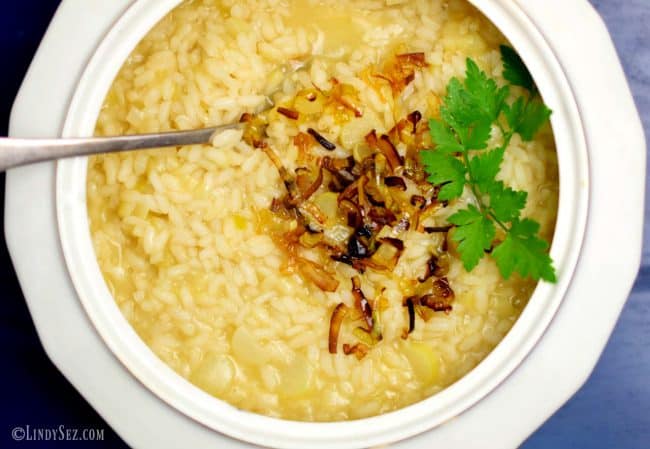 Instant pots are all the rage right now, and all it really is is an electric, pre-timed, pressure cooker (or slow-cooker). I like mine OK but still, prefer to make my risotto in my pressure cooker. But one will work as well, or as quickly, as the other.

I have friends, and colleagues, that insist you cannot make a proper risotto in a pressure cooker, as it's the constant stirring that breaks down the starch to make a risotto creamy. 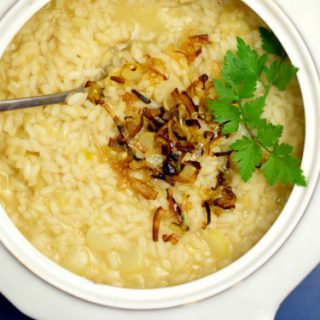