Crostini are always easy to serve. They are easy to make. And they are very versatile in what one can put on the top.

Bruschetta? Again, good choice. But tomatoes are not in season and still pretty ordinary.

I wanted something different.

I love beets. Aside from beets being considered one of the world's "healthiest" foods, roasted beets are delicious. How about a puree of roasted beets? That would be pretty. Bright red puree with a sweet earthiness. And so it began. 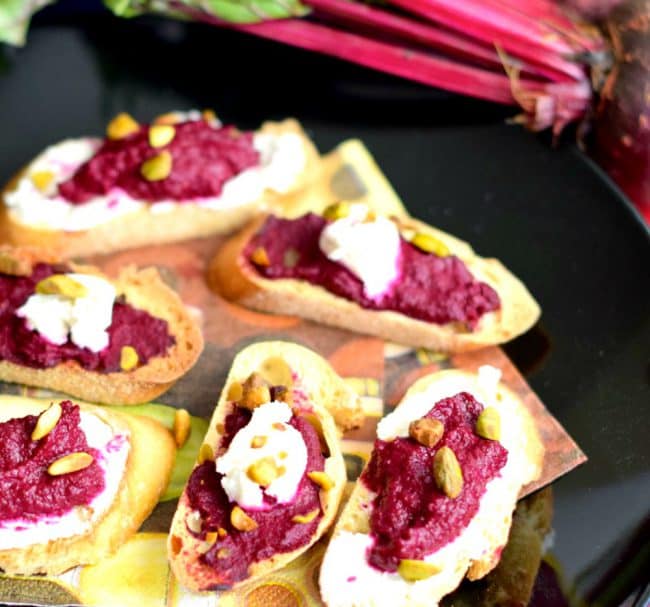 As I was thinking and researching the best beet purees, I found one that used tahini in it but called itself "Beet Hummus" rather than beet puree.

I guess they figured it had tahini, so, therefore, must be hummus. I thought, for about a nanosecond, to call my puree hummus, but only for a nanosecond.

Hummus literally means chickpea in Arabic, and since neither theirs nor mine contained any chickpeas, calling it hummus, while sexier than puree, would be wrong.

So puree it is, although I did add the tahini. If you don't have tahini, substitute 1 teaspoon of toasted sesame oil.

Heat the oven to 400ºF; trim the top and root end of the beets so that only a tiny bit of the stems remain, do not cut deep into the beet, just trim to the beet, wrap them in foil, put on a cookie sheet and bake until tender.

Generally speaking, small beets will take about 45 minutes, medium-sized beets, an hour or so, and large beets about an hour and a half.

To check for doneness, stick a skewer into the middle of the beet, right through the top of the foil. If it goes in easily, the beets are done.

If cooking more than one size beet, it's best to wrap them up according to size in smaller packets so the smaller ones don't get overdone while you wait for the larger ones to finish.

When tender, remove the foil packet from the oven and open it to allow the beets to cool. As soon as they are cool, remove the skin by gently rubbing with your finger (put on some gloves if you don't want to deal with pink fingers for a while); or you can use a paring knife and carefully remove only the outer layer of skin, taking care not to cut too deeply.

Once peeled, cut the beets into quarters, or even smaller if so desired, and place them into a blender container and whirl them into a smooth puree.

A high-speed blender works best, but even a small blender will work, you will just need to stop and scrape the sides more often to get the right consistency. 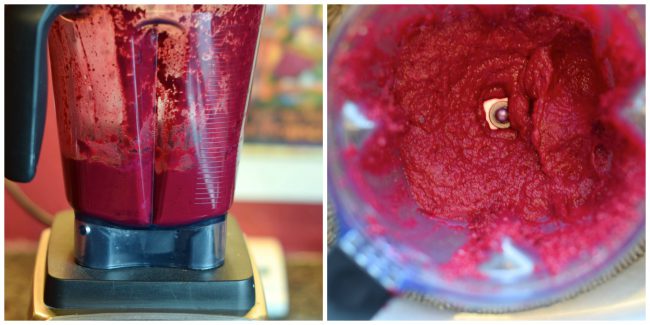 So now I have this sweet earthy beautiful vibrant puree of beet. What else?

I think it needs some tang. Goat cheese is tangy. Goat cheese and beets are wonderful together. So that's the next layer.

Or wait, should the goat cheese be the first layer?

Believe it or not, the way you layer this crostini will affect your taste.

Beets on top, you get the earth then the tang.

My favorite way to layer these two components was, goat cheese bottom, puree on top of that, then a plop of goat cheese again. Tang, earth, tang!

So far I have a very lovely crostini. 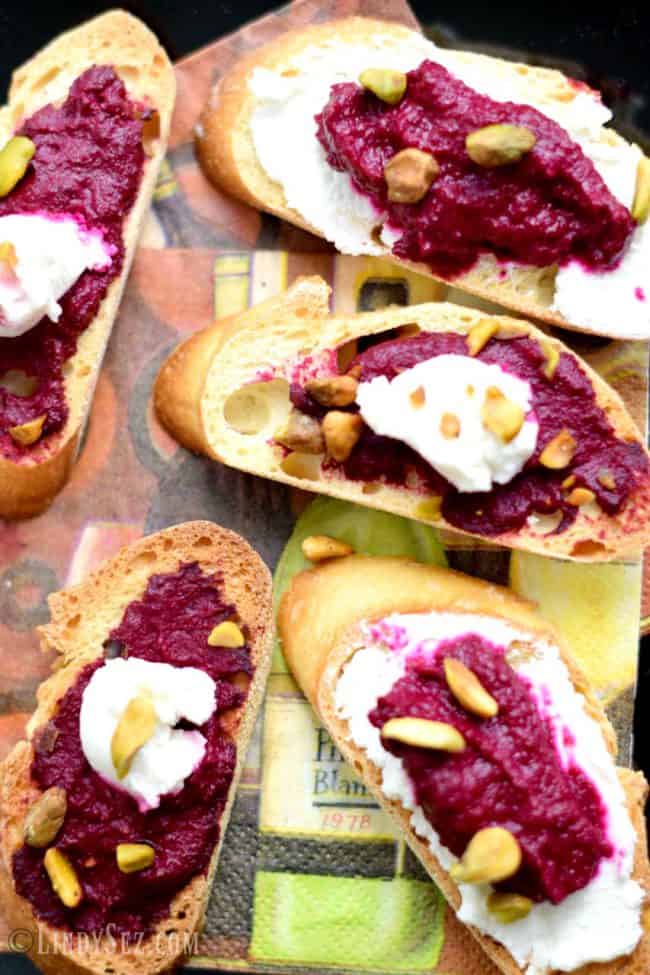 We have earthy. We have tang. We need something sweet. Buttery.

In comes the beautiful, buttery pistachio. Lightly salted, roasted pistachio is the perfect finishing mouthfeel, and flavor for this crostini. 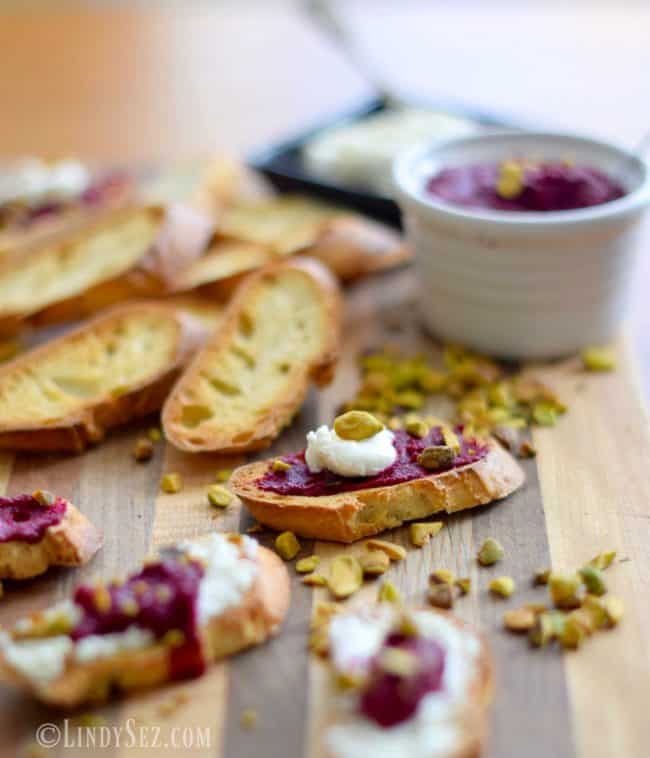 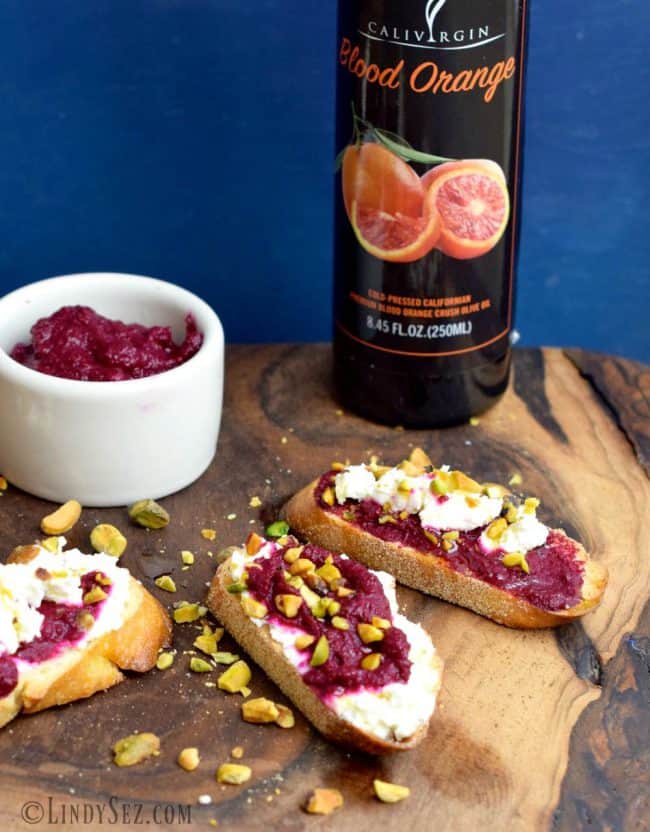 Brian and I attended a crab fest to support the Soroptimist charities. And I won my silent auction lot. Four "award-winning" local extra virgin olive oils - one of which was blood orange infused. As soon as I got into the car with my newfound riches, I thought...hmmm...I'll bet that orange olive oil would taste pretty good on those crostini I made.

Since I had left-over puree and some goat cheese, I decided to make new crostini toast and try out the new thought and... 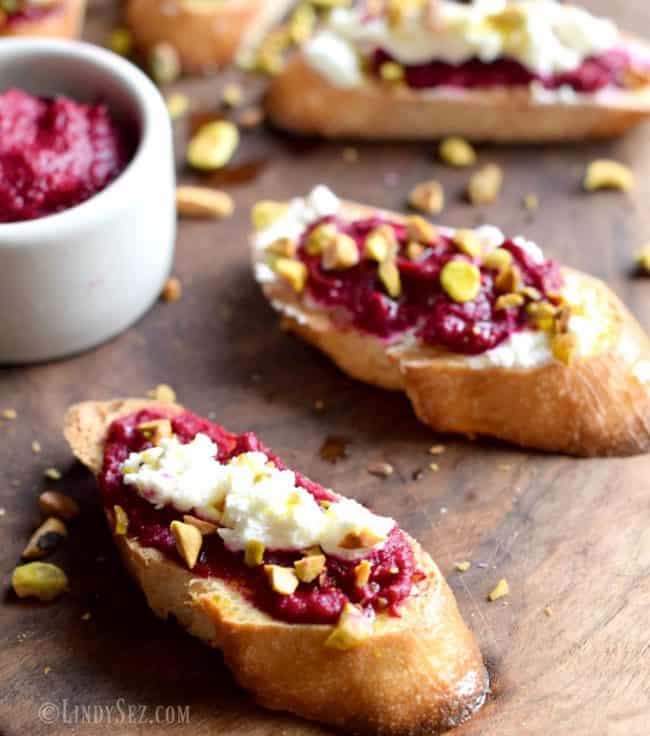 Now I'm done. No need to mess with perfection!

Want more great appetizer ideas? Try one of these...

CROSTINI WITH TOMATO JAM AND RICOTTA 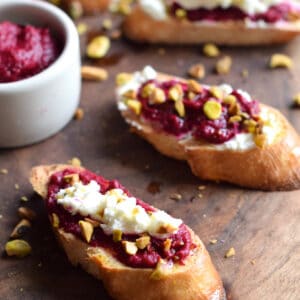