Ratatouille is a great dish to make in the summer months when the garden is brimming with zucchini, eggplants, and tomatoes. It's traditionally cooked for a long period of time. This "Not Really Ratatouille" is a quicker and fresher approach allowing each vegetable's individual taste and texture to emerge. 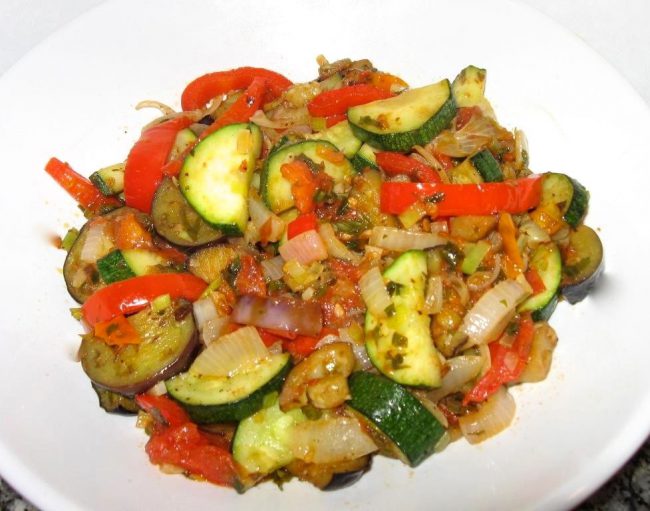 The Making of Not Really Ratatouille

It's summertime and the living is easy. Well, it's hot, it is somedays muggy, and my vegetable garden is producing a good amount of fresh veggies, zucchini, tomatoes, eggplant. All so fresh fresh fresh.

I've always resisted ratatouille. All of the preparations I've had consisted of overcooked mush vegetables, one hardly distinguishable from another. A hodgepodge of cooked soft glop. While the taste may be fine, it felt to me to be more like baby food than real grown-up food. So I came up with this version of ratatouille that allows each of the vegetables to shine through in their own individual glorious goodness.

The trick, of course, is to cook each vegetable to its own individual perfection and then remove it from the skillet. Once each vegetable has been cooked, the sauce is prepared and the vegetables are returned to the heat and finish in the sauce. Now you have a dish of vegetables that each remains true to themselves and the flavors blend together but are still not mushy.

Since the movie Ratatouille was released, I think more chefs are finding that keeping the vegetables from stewing together is the better option. And why not have your summer veggies keep their taste?

Now about that movie, while I think, for a rat, Remy is cute enough, and the story is fun and all, there's something about rats in the kitchen that just doesn't sit right with me. Sort of like overcooked vegetables. 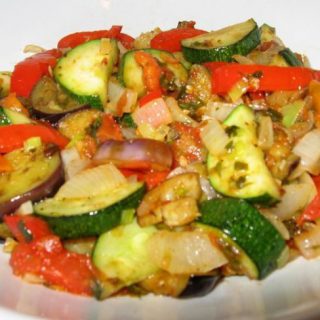 LindySez
Ratatouille is a great dish to make in the summer months when the garden is brimming with zucchini, eggplants, and tomatoes. It’s traditionally cooked for a long period of time. This “Not Really Ratatouille” is a quicker and fresher approach allowing each vegetable’s individual taste and texture to emerge.
No ratings yet
Print Recipe Pin Recipe
Prep Time 15 mins
Cook Time 15 mins
Total Time 30 mins
Course Vegetables
Cuisine American
Servings 6 servings
Calories 151 kcal