his recipe for Mexican "Lasagna" Enchiladas Casserole is a tribute to two great ladies and cooks, my mother, and my mother-in-law. A little American transplant cooking style, combined with down-home Tex-Mex. It's simple to put together and I'm sure it will quickly become a family favorite 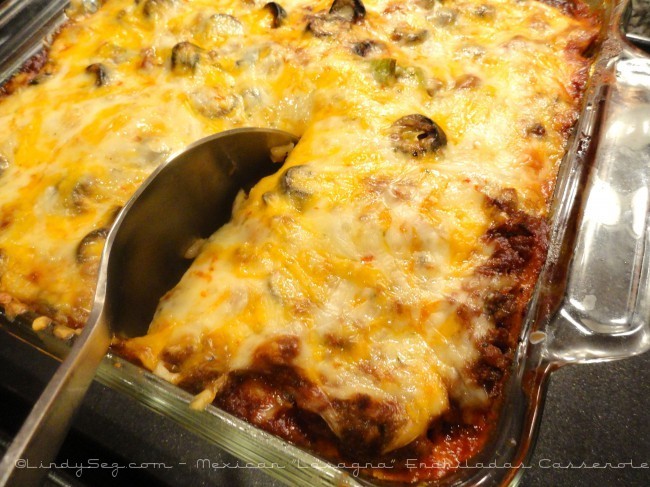 My husband was raised on Cheese Enchiladas.

His mother Gail was from Texas and would make them at least once a month topped with her Tex-Mex Enchilada Sauce or Gravy. As the story goes, everyone liked something different inside of their enchilada - his dad had to have black olives but did not want chilies or onions. His sister liked the onion and chilies, but not black olives. Gail was a purest... cheese only. My husband, the adventurous eater wanted “all of the above”. In order to keep tabs on what was in what, she used toothpicks, one toothpick for Bill's, two for Stacy's and three for BB's. It was quite the sight to see the pan come out of the oven with all these toothpicks sticking out.

Mexican "Lasagna" Enchiladas Casserole is a tribute to two great ladies and cooks, my mother, and my mother-in-law.

I was raised on Beef Enchiladas.

My mother, being German was not so familiar with Mexican food so she would use a canned enchilada sauce. Living in the Los Angeles area, it was not hard to find brands like Las Palmas or La Victoria. which are made as an enchilada sauce should be made, with chilies, not tomatoes. She would fill her tortillas with seasoned meat, diced black olives, and onion. Open the can, pour over the sauce, add some shredded cheese, bake, and voila - enchiladas!

I make both cheese and meat enchiladas using either Gail’s gravy or canned sauce, depending on my mood. But the other day I thought, “heck, why not mix it together? The best of both worlds”.

And that's how this recipe for Mexican "Lasagna" Enchiladas Casserole came to be. This casserole is best made with older, not so fresh, tortillas. And yes, I'm going to insist on corn, even though I know there are parts of this country where it's hard to find them. I just don't think flour tortillas would give the right flavor or texture. But if that's all you have, and that's what you are used to...give it a go and let me know how it turns out.

I love the layers in this casserole, each bite is full of enchilada flavor! It goes together so easily I'm sure it will soon become a family favorite. It's also perfect for taking to a pot-luck.

I served Mexican “Lasagna” Enchiladas Casserole with a simple Cara's Mexican Style Broken Rice that my granddaughter taught me how to make, a winning combo. 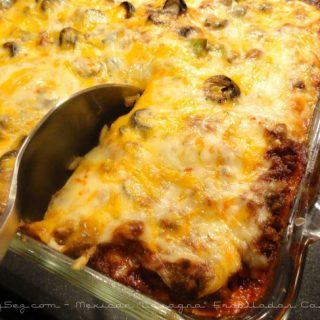 The recipe for Gail's Enchilada Sauce can be found here.