Lindy's Chili Gravy is so versatile and can be made for less than 60 cents per serving. Use it on hot dogs, hamburgers, as a dip, or on spaghetti

The making of Lindy's Chili Gravy

This recipe for Lindy's Chili Gravy was my first answer to the try to replicate the sauce served at Der Wienerschnitzel.

Every time we go to Southern California, we have to stop at Der Wienerschnitzel to get a chili dog. Or Tommy’s to get a chili burger. If we get to wanting them up here in the northern part of the state, well, we’re just SOL. I use to run to the store and grab a can of Dennison’s or Hormel chili with no beans and make them. But buying canned chili with no beans is not cheap, even on sale each can cost more than $3.00; and once you look at the ingredient list, well, of the two of them, Hormel and Dennison’s; Dennison’s is the less “processed” product, but still, at $3.29 per can, I thought “well, why not make some yourself”. Well Duh.

I wanted a “chili sauce” that was reminiscent of  Tommy’s and Der Wienerschnitzel, in that it’s more about the sauce and less about the meat. It’s made to complement whatever it’s poured on rather than overpower it. I thought finding a recipe online, at least as a base, would be pretty easy, but it wasn’t. Most of them were just simply weird, with vinegars and sugar added, and celery???

And almost all of them had tomato paste, tomato sauce, or canned whole tomatoes. Another flavor I didn’t want. I wanted a pure chili flavor. So thinking back on my viewing of Diners, Drive-Ins, and Dives staring our local Santa Rosa Celebrity Guy Fieri, I remembered that many of the places on his show made exactly what I was thinking about…so I looked deep into my memory banks and came up with this version of Lindy’s Chili Gravy.

This simple chili can be spooned over your chili dog, topped with some cheese and onions, or over a cheeseburger.

How about a cheese omelet? Or melting some cheese into it and making a great dip for tortilla chips! Heck, you could even put it on spaghetti…

I left my finished gravy a little looser than I would probably use on a chili dog, but I figured that I could go ahead and add some flour, masa, or cornstarch to each batch as I used it; making it much more versatile. After it sat in the refrigerator overnight, I transferred it to storage containers and popped them into the freezer. Later I’ll transfer to seal-a-meals and then I can have some good chili whenever the mood strikes me! And I made about 30 servings for less than 60 cents per!

I'm still not sure which is better...they are both so good, but different. Try them both and let me know which one you prefer! 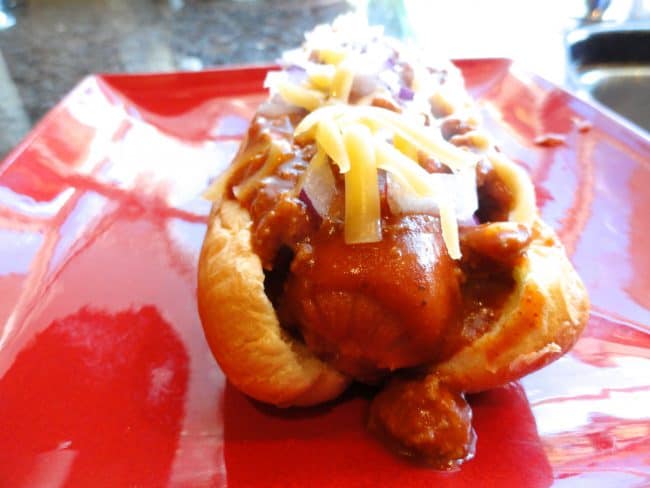 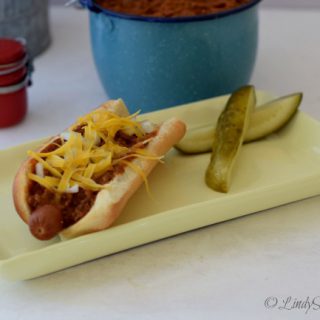