This recipe for Homemade Ketchup, using fresh tomatoes, is so easy to make. You control everything, including what type of sweetener and how much of it.

The Making of Homemade Ketchup

One of my favorite lines in the movie "Family Vacation" (the original) is when Clark, eating a hamburger* made just from Hamburger Helper, no hamburger in it at all, (none needed according to Cousin Eddie, does just fine on its own) and says, "Real tomato ketchup Eddie"? "Nothing but the best" Cousin Eddie replies. (*click the link, it's hilarious) And that's what I have for you here, nothing but the best... with this recipe for real Homemade Ketchup. Made from real tomatoes. With other real ingredients.

Making your own ketchup allows you to use whatever sweetener you desire, and how much of it too.

My garden is not doing great this year. My zucchini is not zucchiniing, my peppers are few and far between, my peas fried before I even got my harvest. Drought? Too Hot? Too Cold? To IDK...some years are just like that. I think it's especially problematic when you do container gardening as I do, perhaps we didn't supplement the soil enough, or too much.

But I do have tomatoes, and one of my favorite things to make with tomatoes is ketchup, which is really just a rich cooked down a bunch of tomatoes, along with some chopped onion or shallot, and then combined with vinegar and sugar. You can add spice to it, or leave it plain.

Making it yourself allows you options.

Sweeter? Add more sugar. Like it tart? Add less sugar, more vinegar. Don't like to use sugar at all? You can substitute any sweetener you prefer, Stevia, Agave Nectar, honey, brown sugar, you name it, you could use it in place of granulated. If you do use granulated, use pure cane sugar for its clean true sugar flavor. And of course, using any of these sweeteners keeps you away from the dreaded "high fructose corn syrup".

The beauty of cooking it yourself. Being in charge.

Ketchup and catsup are simply two different spellings for the same thing, a modern, Westernized version of a condiment that European traders were introduced to while visiting the Far East in the late 17th century. That condiment was made up of brined or pickled fish guts mixed with spices and herbs. Not your mother's ketchup. Although in retrospect, I think my mother called it catsup.

The tomato-based version of ketchup quickly caught on in the U.S. during the first few decades of the 19th century. At first, it was made and sold by farmers, but by 1837 at least one company was producing and distributing it as catsup on a national scale. Then H. J. Heinz Company, a relative latecomer to the game began to produce tomato-based ketchup in 1876. The Heinz company also referred to their product as catsup but switched to ketchup in the 1880s to stand out. Boasting 47 kinds of ketchup, Heinz's influence pushed ketchup to become the standard spelling in the industry and among consumers, though you can still find catsup strongholds sprinkled across the U.S.

So you choose, ketchup or catsup?

As I said, for my ketchup I used fresh tomatoes from the garden. 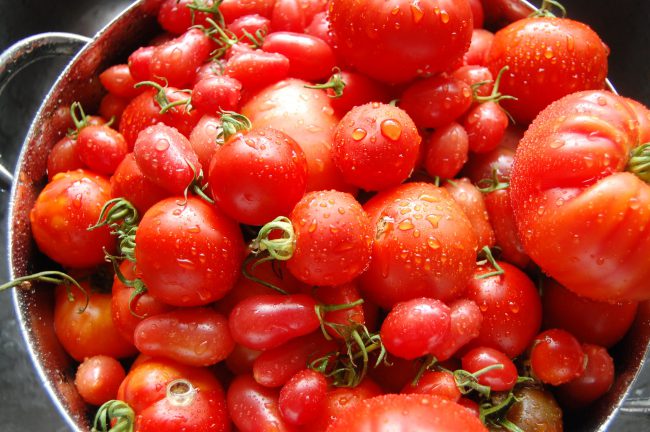 It doesn't really matter what size or shapes the tomatoes are, but it is best to use all of the same colors, otherwise, your finished product will look murky. It will taste fine but the appearance won't be so great.

To peel or not to peel, that is the question

When working with fresh tomatoes, you always need to stem them. But do you need to peel them? Not really. Not if you put them through a food mill prior to the second cooking. The food mill will remove both the skins and the seeds. If you don't have a food mill, then I would peel the tomato before starting the process. You will still need to push the pulp through a fine sieve using a wooden spoon to remove the seeds, but this is a lot easier to do without the skin on.

If you don't have a bunch of fresh tomatoes, no worries; you can use canned in their place.

So grab a pot and let's make some Homemade Ketchup. Use it freely on hot dogs, hamburgers, with or without that Hamburger Helper, mix it up into a cocktail sauce for some sweet shrimp, or to just dip some fresh Skillet French Fries into it.

LindySez: As there are no added preservatives - Homemade Ketchup will stay fresh in the refrigerator for about 6 - 8 weeks. It could also be frozen, although that makes it a little hard to spread (haha). Thaw and stir vigorously before using. 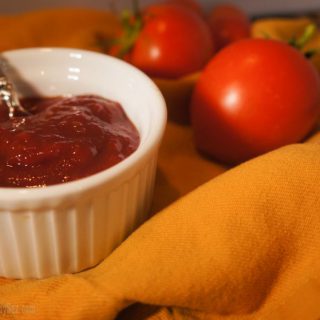 LindySez
This recipe for Homemade Ketchup, using fresh tomatoes, is so easy to make. You control everything, including what type of sweetener and how much of it.
No ratings yet
Print Recipe Pin Recipe
Prep Time 15 mins
Cook Time 4 hrs
Total Time 4 hrs 15 mins
Course Sauces, Dressings & Condiments
Cuisine American
Servings 2 cups

LindySez: As there are no added preservatives – Homemade Ketchup will stay fresh in the refrigerator for about 6 – 8 weeks. It could also be frozen, although that makes it a little hard to spread (haha). Thaw and stir vigorously before using.
Keyword canned tomato ketchup, catsup, fresh tomato ketchup, homemade ketchup
Tried this recipe?Let us know how it was!