Green Bean and Potato Hash with Arugula is delicious with or without the egg, but better with. It's like topping with Hollandaise, but without all the work. 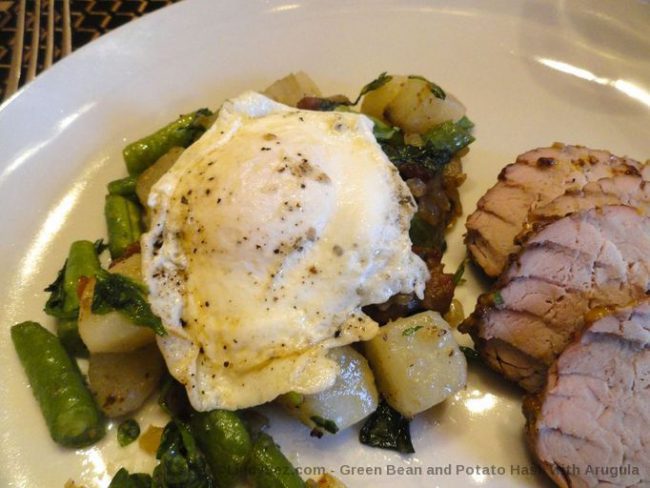 The making of Green Bean and Potato Hash with Arugula

Having just returned from a food adventure in Seattle and Portland, I find that my chickens have finally started laying (of course they would wait until I was gone) and my green beans are going nuts.

This is only a part of what I pulled out in about 15 minutes' time.

I love fresh green beans. Simply steamed, a little butter, maybe some fresh herbs, salt, slivered almonds. Easy and good. But I don't want to eat them that way every day, and since I'm not so fond of frozen beans, even when they come from fresh from my garden beans, I need to think of some new and creative ways to make them and keep them.

I start thinking about one of my favorite preparations; stewed green beans. This is when I take some bacon (or ham); sauté with some chopped onion, garlic, then add canned tomatoes (I usually make this in the winter, so canned tomatoes is the only way to go), add the green beans, and simmer them together for about 30 - 45 minutes. Very tasty.

Wandering down this path, I make a slight turn to the left and decide to make a hash. A hash, as you might know, is simply a combination of chopped ingredients, usually potatoes and meat, generally, with some vegetable,  that is then fried.

I get two Idaho russet potatoes, peel them and cut it into about ½ inch cubes. You could use whatever potatoes you want, this is what I had. If you use Yukon gold, white rose, or red potatoes, you wouldn't have to peel them if you didn't want too, but with the russet potato, I wanted to. I boil these cubes in salted water for about 3 minutes or until they were nice and tender, but still firm.

While those are cooking and steaming, I cut 2 slices of thick applewood smoked bacon into a large dice, as well as half a yellow onion.

I start sautéing the bacon in a skillet until it is just beginning to crisp up and turn brown, rendering all of its tasty bacon drippings. Before the bacon gets too crispy, I add the onions, the water from the onions will stop the bacon from browning further while keeping everything cooking. As the onions start to brown around the edges, I add my cooked, diced potatoes...cooking and stirring them all together. Once the potatoes just begin to brown, I add my green beans and a pinch of salt.

Then I thought I should add some sort of herbal element.

Cilantro? Not the right flavor profile.

I got it! Arugula. Peppery, herby Arugula. I toss in a couple of handfuls.

Just as I'm getting ready to serve, I remember the fresh eggs my son brought in from the chickens that afternoon and have an inspiration. I'm not one who generally thinks of eating eggs with dinner, but, it's fresh from my chicken and it's a hash. What's better than hash with a runny oozy egg yolk on top?

Not much is my final decision. Not much at all.

This hash is good without the egg, but better with. The eggs just add an element of creaminess to the dish.

Sort of like topping with Hollandaise sauce; but without the work. 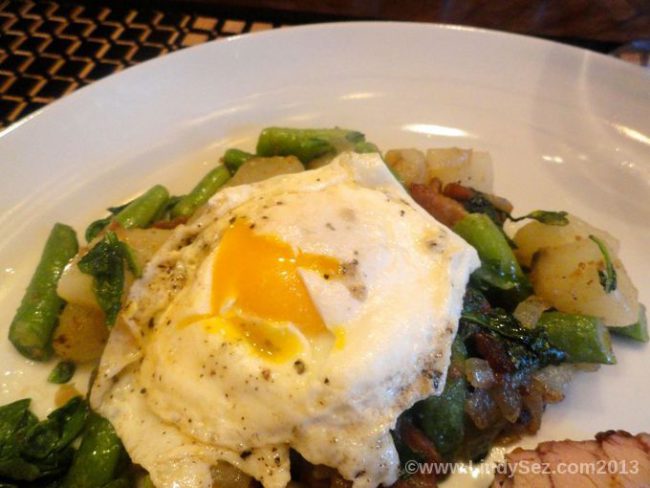 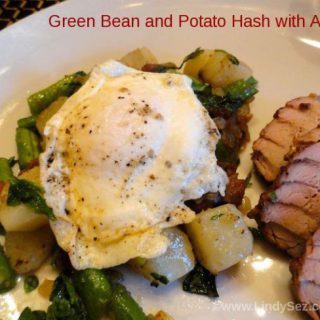 LindySez
Green Bean and Potato Hash with Arugula is delicious with or without the egg, but better with. It’s like topping with Hollandaise, but without all the work.
4 from 1 vote
Print Recipe Pin Recipe
Prep Time 10 mins
Cook Time 20 mins
Total Time 30 mins
Course Other sides
Cuisine American
Servings 2 servings
Calories 273 kcal

This recipe is written for two people, but can easily be doubled, or more.