This recipe for Homemade Fresh Green Enchilada Sauce is so easy to make you will not need to buy canned ones again. The sauce freezes beautifully so make a large batch and freeze some for later use.

That, coupled with the added ingredients used that I don't need in my diet, corn starch, sugars, be it corn syrup or cane, MSG, maltodextrin (what is that?), and added yeasts, I thought it might be time to find one that was homemade without these added ingredients.

So I went to the internet thinking I would find a great homemade version of fresh green enchilada sauce.

I would think so, but I would be wrong.

I found recipes that used a lot of tomatillos, but hardly any chilies.

I found recipes that used a lot of chilies, but very little tomatillo.

I wanted an authentic-tasting fresh green sauce, that was smooth and spicy. So I went into the kitchen and made it up.

See the recipe card for quantities.

These little fruits are a member of the nightshade family just like tomatoes and cucumbers. Tomatillos are native to and grown mainly in Mexico, but have been adopted by American farmers due to their resistance to disease.

Tomatillos, sometimes called husk tomatoes, look like green, unripe tomatoes with a dry, leafy husk that wraps around the outside. The color of the fruit is a beautiful bright green, which fades a bit once you cook them

Tomatillos have a slightly more acidic, slightly less sweet flavor than ripe and unripe tomatoes. Overall, the flavor is more vegetal and bright, and the interior texture is denser and less watery.

Prepping a tomatillo is pretty straightforward. The husks can be easily removed with your hands and discarded. You’ll notice a sticky film on the surface, which will come off with a quick rinse under warm water.

Char your Anaheim and Poblano peppers, when cool, remove the stem, skin, and seeds. Chop into pieces.

Heat a small amount of oil and saute the raw vegetables over medium-low heat until soft.

Simmer the peppers until very tender about 15 minutes. Allow to sit for 10 - 15 minutes to cool.

Once the vegetables are soft, add the roasted peppers along with the water, cumin, oregano, and some salt and pepper.

Using caution, blend, in batches as necessary, until you have a smooth sauce.

My KitchenAid blender does a fine job of making a smooth sauce. If your blender is not as powerful, you may want to pass the blended sauce through a sieve or food mill to achieve a smooth sauce.

What's the best way to roast the peppers?


The easiest way to roast chilies is under the broiler in your oven. I take a heavy-duty sheet of aluminum foil and place that on the rack in the uppermost part of my oven, closest to the broiler, and just lay the peppers on it. The gaps in the racks help keep the pepper in place as I turn them, occasionally, to get all sides well charred. It will take about 15 minutes to get all sides properly charred.

After they are roasted, put them in a bowl and cover them with the same foil you used to lay on the racks. Let them steam, and cool, for at least 15 minutes before removing the skin and seeds.

You can also roast them over an open flame, such as a gas stove burner or BBQ grill.

Should I rinse the peppers after I have peeled them?


NO. Never rinse your peppers after roasting, the water just removes that wonderful roasted taste. A few seeds and a little remaining skin won't hurt anything in the end.

Can I add cilantro to the green sauce?

Is Green Enchilada Sauce the same as Salsa Verde?


The main difference is that Green Enchilada sauce is cooked, and Salsa Verde is raw.

Can this sauce be made thicker, or thinner?


Yes. You can easily make the sauce thicker or thinner. To make it thicker you can sprinkle about 1 tablespoon of flour over the vegetables when they are almost cooked. Allow that to cook for a few minutes, then add your roasted peppers, water, etc.

Other than a good chef's knife and a deep saucepan, you will need some of these other pieces of equipment:

A blender - a heavy-duty blender is best, but any blender, including a immersion blender, will work to get the sauce to a saucy consistency. If the sauce is not smooth enough, you can put it through a strainer to remove any chunks.

If you don't have a blender you could use a food mill to process the solids.

When choosing your peppers, try to keep them about the same size for easier and more even roasting.

Choose tomatillos that are covered in papery skin, and not exposed. The tomatillo should be firm, green, and without blemishes. 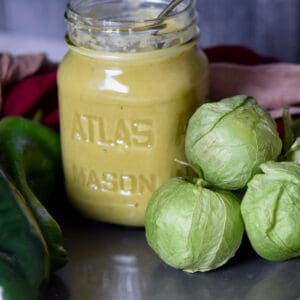