"Wanting to kick things up a bit from the regular coleslaw routine, I came up with this spicy Coleslaw with Sriracha Dressing - yep, a definite kick"

The making of Coleslaw with Sriracha Dressing

My son is home for spring break, well, I guess it's no longer really spring break as he has GRADUATED with his degree in Hospitality Management so he's really just taking a break from school until he starts work...but let's call it spring break since he's doing all the spring break things while he's home...like nothing in particular. Just taking it easy.

I wanted to make fish for dinner so we went to the market to see what they had...the pickings were slim but they did have some beautiful true cod filets. Trevor's mind went immediately to some fish and chips. OK...what else to go with? Coleslaw, naturally.

But I didn't want to make the same old same old kind of coleslaw. I wanted to kick it up a bit, so I thought to add some sriracha to the dressing. 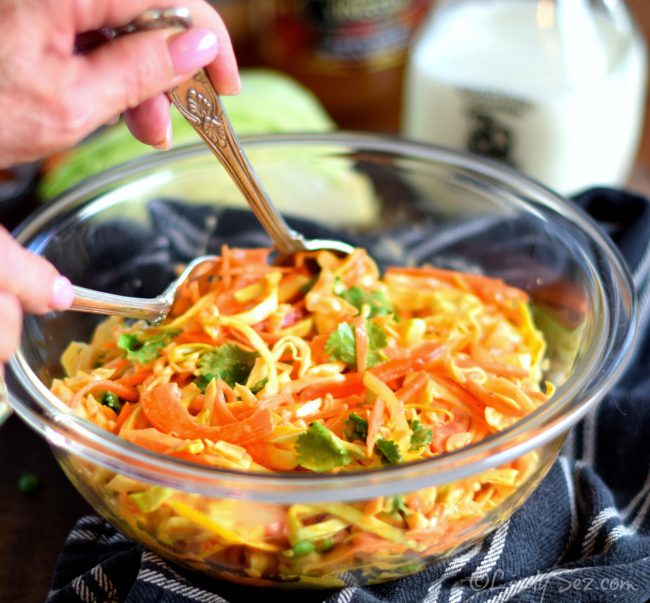 And kicked up it was.

Not blow your head off hot, but whew, this is hot kind of hot. I really thought the slaw ingredients would calm down the dressing when I first tasted it, but they didn't really do much calming down.

Perhaps if I had added another sweet element, such as apple or even pineapple, it would have, but I didn't have those and so we enjoyed it as it was. And we did enjoy it. Although next time, as I said, I might start with a wee bit less sriracha.

As you know, I like using the freshest ingredients when making food - but I'm also very pro certain convenience foods and packaged slaw mix is one of them.

I happened to have a half head of green cabbage left from St. Patrick's Day, so I thinly sliced that up - but do feel free to get a packaged slaw mix which will probably already contain the carrots so you wouldn't have to julienne the carrot either.

Unless you wanted to add more of that powerhouse of vitamin A.

And you could also use a combination of colors. I love all the new colored carrots that are being sold in most grocery stores.

Same of the peppers. I like to use about ¼ each of a red, yellow and orange pepper. 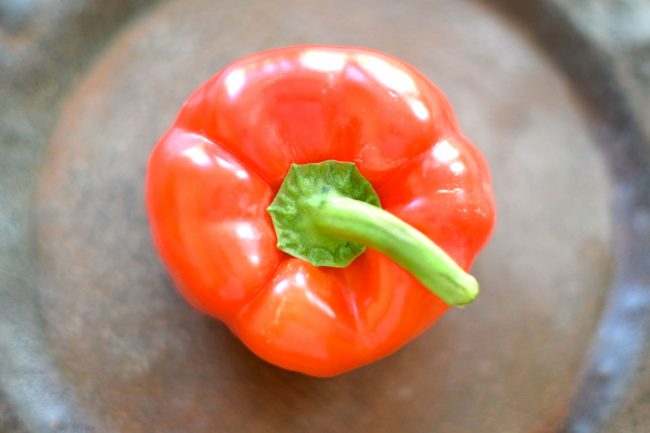 I love how pepper's make perfect little sections as it grows and develops.

Just slice around the edge, from top to bottom, and you have a perfect size to thinly slice into the salad.

You can, of course, use just one color...just don't use green pepper as the flavor is too strong. Red, yellow, and orange peppers are much sweeter.

And when slicing peppers, cut from the inside where the flesh is softer, to the outside where you have the tougher skin.

I love cilantro and thought that would be a nice flavor element in the salad.

And it was. I just take the leaves off the stems and throw them into the mix.

If you don't like cilantro, don't use it. Easy as that. You might want to add some thinly sliced green onion instead, or with.

As I said, I think some julienned apple would be good. And pineapple tidbits would add an interesting touch.

Next time. Yes, there will be the next time.

So serve some kicked up Coleslaw with Sriracha Dressing the next time you make slaw. It's so darn kicked up good.

Perfect as a side to Easy Baked Asian Baby Back Ribs 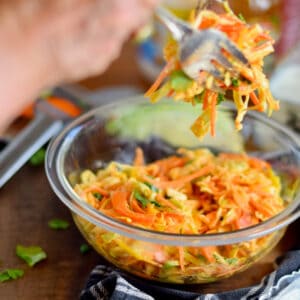 Best if left to sit in the refrigerator for 30 minutes or so to allow the flavors to blend,

« Sauerbraten My Way
Sole with a Light Creamy Shrimp Sauce »