This recipe for Chile Cheese Chicken Roll-up with Creamy Verde Sauce combines thinly pounded chicken breast, fill it with some roasted peppers and melty cheese, then brown it too crunchy goodness to make this simple, yet delicious, meal 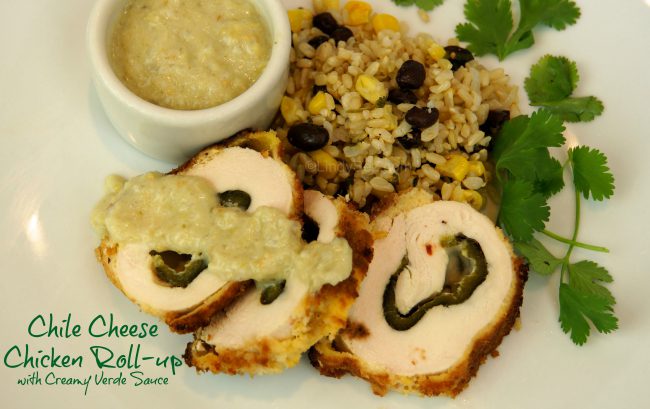 Once you've come up with a recipe like Easy Chicken Cordon Bleu with Dijon Mustard Sauce, it's not a far jump to take your love for Mexican food and come up with a Chile Cheese Chicken Roll-up with Creamy Verde Sauce. Replace the ham with roasted pepper, the swiss cheese with some pepper jack, and top it with a creamy Verde sauce. The jump was seamless.

These chicken rolls are best when made with a fresh roasted poblano (sometimes called a pasilla) pepper, or you could use an Anaheim/California chile. In a pinch, you can also use canned roasted whole peppers, such as Ortega brand. Pepper jack cheese was my cheese of choice, but regular jack or a Four Cheese Mexican blend would work as well.

While with the recipe for the Chicken Cordon Bleu I put the crunch of the breadcrumbs on top of the dish, for these, I dredged the rolls in flour and panko and then fried them. I suppose if you wanted to bake them you could; hot oven, a little cooking spray on top, 20 minutes or so until cooked. But I liked the fried crunch and when you fry with hot enough oil, the penetration of the oil into the food is minimal.

That's my story and I'm sticking to it.

Pounding out a chicken breast - the best method

The easiest way to pound out the chicken is to put the breast, with the tenderloin removed, into a large zip-top bag; starting at the thickest part, pound lightly, but firmly, with the blunt side of a meat mallet, or even a small frying pan will work. Gently pound from the center to the outside, until the meat is fairly uniform in thickness. Don't fret if some of the meat tears, you can fold those pieces in when you roll and secure the final filled roll which will be tied, dredged, coated and fried to a crispy crunchy goodness, then topped with a simple creamy green tomatillo sauce (and yes, I used canned). 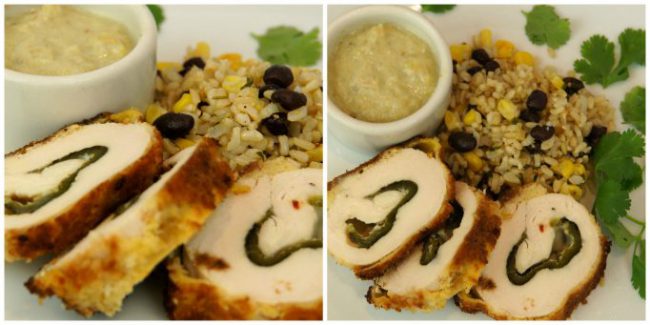 No matter how you slice it...it's good.

Are you hungry yet? I am. So let's go and make it!

I served these Chile Cheese Chicken Roll-ups with some cooked rice that I mixed with some black beans and fresh corn. But f you would like a lower-carb option for the side, try this Zucchini Corn Saute. Perfect match. 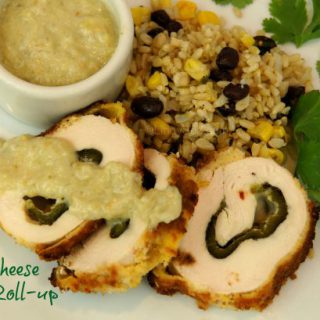 « Easy One Pan Country French Chicken
Quince - What is it? »