Braised Leeks and Fresh Peas is the kind of vegetable dish that was popular on my grandmother's table and it's still a classic today.

The story behind Braised Leeks and Fresh Peas

Braised Leeks and Fresh Peas is the kind of vegetable dish that was popular on my grandmother's table. Too often, the vegetable is the last thing on your mind when it comes to dinner, but I think that's a mistake. Vegetables can be a great "supporting" character for your main dish and you don't have to pay the Jolly Green Giant a bunch of money to put the butter sauce on for you.

My son's girlfriend declared "you make me want to eat my vegetables" ...nuff said!.

This is a simple vegetable dish, using fresh spring produce; simply prepared which allows their flavor to shine.

How to Prepare Leeks

Leeks, as you may know, are a member of the allium family which also includes chives, scallions, and of course, onions. In the states, they are most often used to flavor soups and sauces, not often thought of as a main vegetable dish. They are much more widely used in European countries, but they really have a beautiful flavor on their own, and braising them makes them meltingly tender.

Because leeks grow underground, they can have a lot of dirt in them and need to be cleaned. Generally, you use only the tender white portion of the leek in a dish, but don't throw that top away, once cleaned it adds a lovely flavor to soups or stocks.

For this recipe, you will be using only the white section. It's easiest to clean once it has been cut into half lengthwise giving you a clear view of any dirt inside. Rinse well under cold running water to remove any grit, then proceed.

Springtime means fresh peas. I grow them in my garden and it's so nice to go out and pick some fresh from the vine. Back in the way back days, women used to sit around their big front porches all shelling peas and gossiping. Now I do it at my kitchen table with some music in the background, but shelling peas can be very calming. Most grocery stores and farmer's markets sell peas in their pods during the spring months or already shelled. If given the choice, get them in the pod. They are sweeter and more tender.

If fresh peas are not available use frozen.

I served this with Seared Pork Tenderloin with Mustard Sauce for a simple, yet elegant dinner the whole family loved. 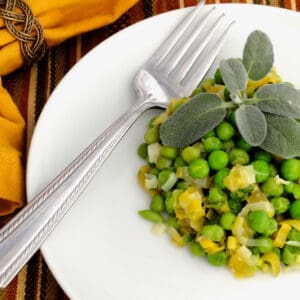 *Time will be longer if you need to shell your peas.