Using flank steak rather than top round, My Mother's Rouladen is a non-traditional presentation to a very traditional German dish.

My Mother's Rouladen also known as Stuffed Flank Steak has been a family favorite since the beginning of time; well, at least my time as I know it. It is the most requested birthday dinner meal, from my childhood days to my children's childhood days. While traditionally done with thinly sliced bottom round, when I was a child bottom round was hard to find, grocery stores not being what they are today, so my mother made it as a stuffed flank steak. I find this presentation much prettier. When made with bottom round, well, it looks a bit like a turd to me.

A video showing how to make My Mother's Rouladen in a pressure cooker.

Everyone loves My Mother's Rouladen

I have served My Mother's Rouladen over the years to many people and everyone loves it. While surprised by the pickles, the flavors of pickles, onions, and bacon meld to make a delicious bite. Flank steak is also a very lean cut of meat, so the bacon is important not only to add flavor but a little bit of fat. Mustard acts as a tenderizer so the meat is juicy and tender.

While you can cook this in a low oven, a slow cooker, or a pressure cooker, I like the pressure cooker best. Cooking in moist heat keeps the meat moister. And it's ready to eat sooner. That's an added plus for once you've had My Mother's Rouladen, your mouth will be ready to eat it again.

Don't be afraid to tie one on

A lot of people are intimidated by food they have to fill, roll and tie.

It's really not all that difficult and it doesn't have to be pretty when you do it, not pretty in the professional chef sort of way, just able to do the job of keeping the filling inside while you cook it. Watch the video and you'll see my "fancy" tying job. NOT. But it works. When browning a rolled roast or tied meat, always start with the tied side down, this helps seal the tied edge. As with all slow-braised meats, be sure not to rush the browning time, the most common mistake in making good braised meats is not allowing enough browning. You can take it just to the "edge" of burnt. I say edge because black is not good, but dark brown is delicious. And of course, always cook it with the tied edge down to keep it from coming apart in the pan.

I love to serve this with Mustard-Thyme Spatzle and Steamed Green Beans and Slivered Almonds. YUM! 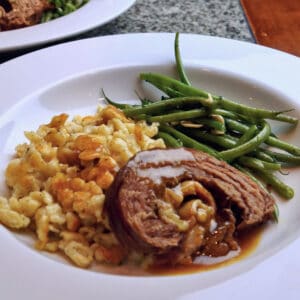 *Cooking times vary depending on the method you choose to cook the rouladen.