I love Thanksgiving - turkey with all the fixings. And one of my favorite holiday sides is the stuffing. After years of tweaking; I've come up with this, my very favorite cornbread stuffing - savory, filled with onions, celery, apples, cranberries, country sausage - it's a meal unto itself. " 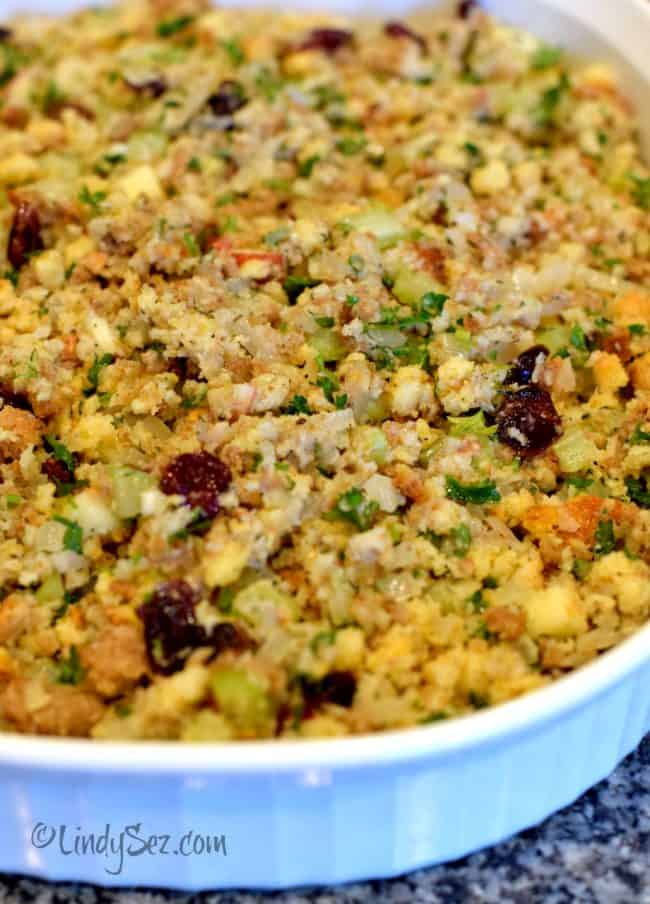 The Making of - My Favorite Cornbread Dressing

Thanksgiving IS one of my favorite holidays of the year. First off, it's right around my husband's birthday - that's always a reason to celebrate. Second, it's all about family. No gifts needed. Just time to spend together enjoying each other.

Throughout the years, I have had many a stuffing. In my childhood, my Swiss grandparents made an in-bird stuffing that was rice, mixed with sausage, seasonings, along with onion and celery. It was really good and for years I thought it was the ONLY kind of stuffing there was.

Then I was introduced to in-bird bread stuffing. It took me a while to wrap my head around cubes of soggy bread coming out of the bird. The texture just didn't seem right. And the early versions I had consisted of bread, onion, celery, chicken stock with a bit of dried thyme thrown in.

Not really a flavor "bomb".

As time marched forward, I was offered the choice of stuffing prepared in-bird or outside of the bird in a casserole dish.

I preferred the casserole.

But there was still something off.

It was when I started cooking my own Thanksgiving meals for the family that I realized - I didn't like the cubes.

And even when my sister-in-law went to all the work of making homemade cornbread and cubing it up and drying it for days and days...I still didn't like the cubes.

It probably has something to do with that whole rice texture that began with my grandmother's version.

As I developed this recipe, I thought of all the components I loved from my grandmother's version. Mostly the use of fresh herbs, and of course, the country sausage. The country sausage gives the dressing a unique rich rustic flavor. And of course, I love love love not only the flavor of but the smell of onions and celery being slowly sautéed in butter - it's such a comforting smell.

When it comes to the cornbread part of the program - well, you could make your own and dry it, and then crush it. But I really like the flavor and texture of boxed stuffing mix - Pepperidge Farm is my preference for a prepared box stuffing, although you could use any brand. I think I like it because it's already partially seasoned and it's perfectly dry to start.

If you do make your own cornbread, do not make a sweet cornbread. Omit all sugar from the recipe. And then make sure you dry it thoroughly. You don't want to start with moist bread or you will end up with mush once you're done with the recipe.

And we're not going for mush here. We are going for stuffing.

You can, of course, make this recipe with either cubes or crushed stuffing mix. As I said, I prefer the texture/feel of the crushed, so when I make my Favorite Cornbread Stuffing, I always get the style that is broken up. And if I can only get cubes...out comes my rolling pin as I crush the heck out of them...until they are all broken up. 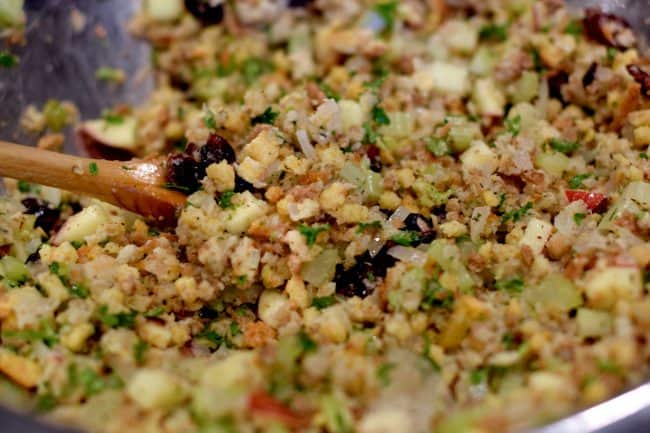 What is more perfect with onions, celery, and country pork sausage than fresh apples? Not much in my opinion. Any firm apple will work - red will add a bit of sweetness, while green would be a bit more tart.

I have tried both sautéing the apples with the onion and celery before adding them to the stuffing mix and adding them uncooked. I find that uncooked keeps the apple's texture and flavor more intact, so don't bother pre-cooking them. Just add them raw.

As time went on, I thought about adding dried fruit because I often make this stuffing as a side for my Perfect Simple Roast Chicken. Since I'm not generally serving cranberries with that, I started adding dried cranberry to the stuffing. The cranberry adds a nice sweet/tart flavor that I really enjoyed. I've also added dried tart cherries. Both work great.

It's just one more level of flavor.

To Egg or Not to Egg

I'll tell you why. I've tried recipes with the added egg, and it's amazing how different the texture of the stuffing changes. Some recipes have you adding as many as 5 eggs! That turns stuffing into pudding IMHO.

The claim is it adds moistness. And it does. But it also gives it a custard-like texture. So I simply add enough chicken stock to get the moistness I want.

Then I have cornbread stuffing - not cornbread pudding.

Just so we are clear, what I am making is not technically stuffing. It's technically dressing.

Stuffing is made inside the bird.

A dressing is made outside of the bird.

This is dressing made outside of the bird.

But you could certainly stuff it inside the bird.

If you so desire.

The reasons I prefer dressing to stuffing are simple.

But of course, it's all up to you. The cook. 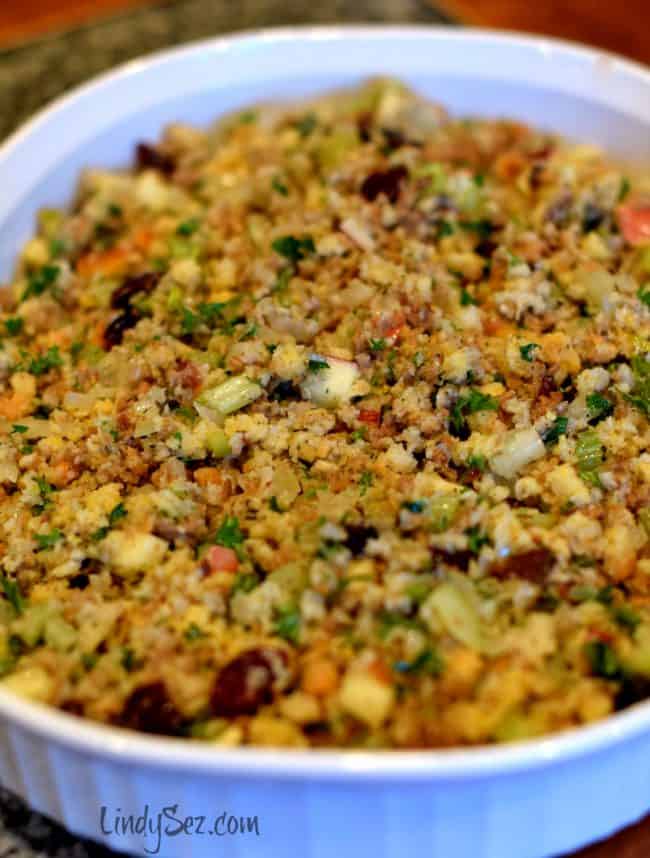 Wine Recommendation: Of course, with stuffing, you generally have a protein, such as turkey or chicken. And while you might think, white meat, white wine, this stuffing pairs beautifully with a Cal-Italian style Zinfandel or even a dry Rose. 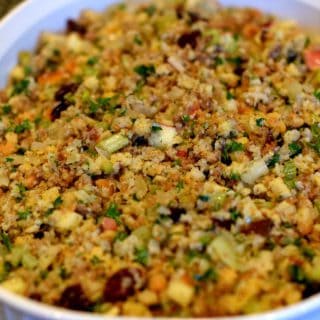 Keyword pork sausage in stuffing, side dish, stuffing, Thanksgiving
Tried this recipe?Let us know how it was!