My Son's 21st birthday bash is right around the corner and I'm so excited I get to celebrate it with him.

My first son turned 21 without me. Well, I mean I was here, but he was there. Already a married man with a child. Kind of lessens the enthusiasm of celebrating this milestone birthday.

(Chris celebrating 21...that's not his daughter)

The year was 1990. There were only 5, 262, 593,000 souls counted on this earth. Germany reunified tearing down the Berlin Wall. The Exxon Valdez had a little accident up Alaska way and the World Health Organization removed homosexuality from their lists of "diseases". To keep our "girlish" figures we were eating WOW Potato Chips, with Olestra (some cramping and loose bowels may be experienced when consuming this product, it was disclosed); AND Tim Berner-Lee created the first web server and the foundation of the worldwide web... my son Trevor was not yet born.

Fast forward. 2013. There are now 7,110,310,940 souls in the world and that is increasing each nano second according to the Population Clock. We seem to be experiencing more of a separation than unification in most countries, we still have shipping accidents, but most seem to be by cruise ships, some people, sadly, still think homosexuality is a disease and we have pills now, to give you cramping and loose bowels in order to keep our "girlish" figures. And if you haven't heard of the worldwide web, then you have been living in a cave.

Having children that are 23 years apart is not an easy thing to manage, it's especially difficult when I'm both a mom and Lita (that's my name for my granddaughters, Cara a married woman with two children of her own, and Kailey, who turns 21 just 3 days before Trevor). It's hard to balance being mother, and "grandma". So I wasn't much of a "grandma". I couldn't really spoil the girls and not Trevor, that simply wouldn't be fair. And to spoil them all would have become the "norm" in the world of Trevor, so to be fair, I was more "mother" to the girls when they visited. While they didn't live close, it worked out with Kailey, she and I would cook together and she loves to be in the kitchen with me. Cara, maybe not so much. We unfortunately don't have a close relationship, and it makes me a little sad, but that is life. We all make choices of who we will make important in our lives, and I'm simply not on her A list.

Trevor has always marched to his own drummer. I've always encouraged him to be who he wants to be. When he was young, it was a Cowboy. How he loved to wear his boots, cinch up his holster, and take the ladies for a spin around the dance floor.

Did you check out those boots? Spurs and all. 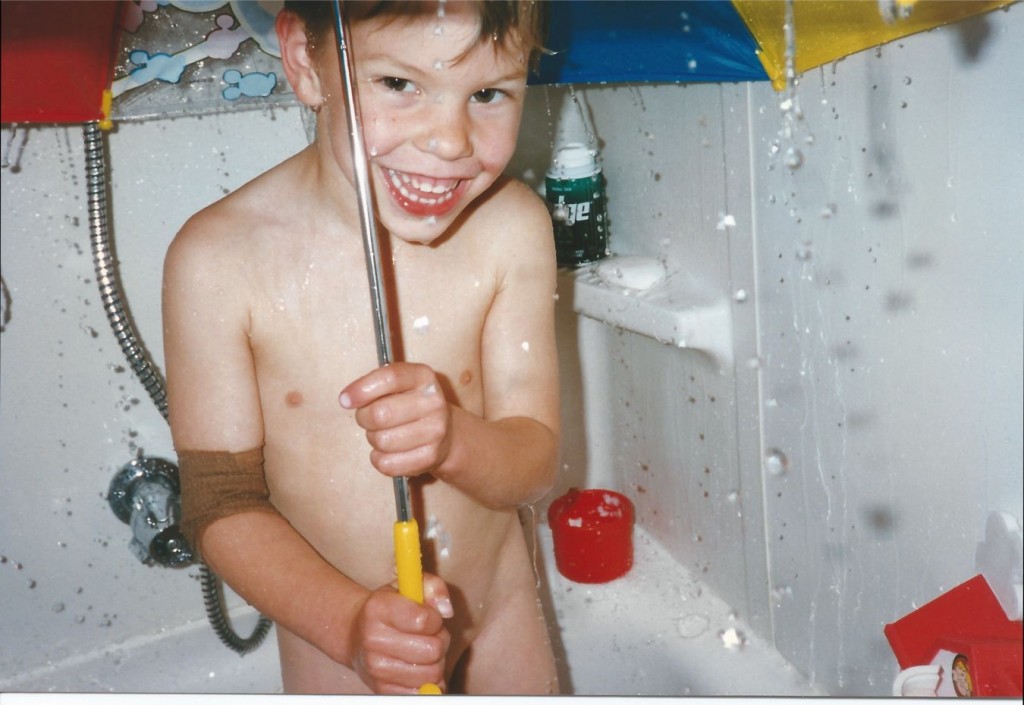 Take a shower with an umbrella? Sure, why not.

But please boy, stay away from the poison OAK!

They've had  their ups and downs, as relationships go, but they get along fine now and are both extremely helpful and interested in food and cooking. That's them helping build a new BBQ for my mother, their OMA...who is still cruising along at the grand age of 89.

Trevor's helpfulness might have started in scouts. I was the Den Mother when he was a Tiger cub, starting at first grade, continuing on into his Cub Scout years. His Dad became the "Scout Master" and I was "Scout Chairman" which essentially meant I did all the work and planning and he got all the glory, but I'm not complaining, Trevor continued on into Boy Scouts where he achieved the rank of Life Scout, earned the Order of the Arrow Award as well as National Youth Leadership Training. All good backgrounds for hospitality management.

Trevor is lucky that he has had many people with many view points in his life. Great-grandparents, great aunts and uncles, grandparents, as well as just regular aunts and uncles. Unfortunately my husband's mother Gail died too young in 2000, and my dad he never met, but he had the likes of Nana B and Granddaddy Austin. And of course, his Oma. All with many age old wisdoms to share with T-Bone, T-Bill, Trevor Weaver and just plain old T.

Nana B meets Trevor  and deems him "Trevor Wevor"

Part of the Family (Grandma in the red, Granddad (Nana's husband)  Auntie Helene (still good to go at 95  just got her driver license renewed, seriously) Mom and Dad and Auntie Stacy

As a child, Trevor loved his snu's. For all of you not in the know, a snu is what we called a "pacifier". Now pacify it did, but Trevor liked a variety pack, so he usually carried at least three. One in his mouth, and one in each hand, that he would "rotate". It was something to see. When we moved to Tulsa, I got him down to two snu snus. But his nanny found a bunch in her house, so she sent him a care package...six of his snus came all at once.

Trevor is in Snu Snu Heaven

Eventually we got back to one, and then Santa Claus was the who to make the call, and on a fine Christmas eve, came to leave him his special gift, and took his snus in "payment". For all the crying and whining to get his snu  out of his mouth when I tried to wean him, Santa Claus got not a whisper. Snu be damned. Santa took it. Life is good.

He did find other things to put in his mouth however...

Time moved on. We moved on. We moved him. A lot. All over the county. But he adjusted and was always a good sport about being taken from point A to point B to point C. How many kids can say they graduated elementary school twice? Or started Junior High, twice? Not that many I would guess, unless you are in a Military Family, then you might have us beat. But in his 21 years, Trevor has moved 8 times, to 5 different cities. Going to college should be a cinch, right?

I'm very proud of my son, and the man he is becoming. I hope his bash is a smash. But really, how can you say no to this face?

Oh and by the way, it won't be the first beers we shared with him. In Germany, if you are with family, and they say it's OK...it's OK...How civilized...

For my Son's 21st Birthday Bash I will be cooking:

(did I mention my garden has a plethora of green beans?)

Brother Chris with nieces Kailey and Cara in Germany, where he proudly served in the USAF