Lindy's Favorite Pie Crust uses just a bit of cold vodka in the crust making this crust one of the easiest to work with. The combination of butter and cold shortening creates the perfect flaky crust while not overpowering the flavor of the fillings. Whether is a single crust, or double crust, this will soon be your favorite pie crust too!

My Mother-In-Law was a great pie maker. Come Thanksgiving she would whip out a pumpkin, pecan, and apple pie without breaking a sweat. Work that dough into a perfect round, get it into the pan without nary a tear. It was a sight to behold.

I would watch with awe and envy.

I've always had a difficult time making pie crusts. The crusts would break or not roll out properly. Too dry, too wet, too cold, too stiff.

I wish I had had more time to learn from Gail, her secrets, and tips, but she passed, so I had to turn to books and magazines and try to muddle through.

I know that experience, just doing it over and over, is one of the best ways of learning how to do anything, but to be honest, I don't make pies that often. Not that I don't love them, it's just that they aren't "skinny me" friendly.

But of course, they are a must around the holidays, and in the summertime, and when you are making delicious Bacon Zucchini Quiche, so I thought I'd try to find the best one I could to use on a regular basis. And I did.

The Bestest Most Easiest Crust

This crust is so easy to work with and it's the addition of vodka that does it...no not in me, in the crust. It keeps it nice, soft, pliable.

No tears, no cracks.

The recipe has been modified from Cook's Illustrated' 2008 Nov/Dec Issue.

If you know Cook's Illustrated then you know they did all the science one could possibly do to come up with the "perfect crust".

I only rewrote it slightly, decreasing the vodka from 2 tablespoons to 1,  but  as they say "Vodka is essential to the texture of the crust and imparts no flavor; do not substitute."

One use and its use is this crust.

Now you might wonder why I changed Cook's Illustrated recipe.

I found 2 tablespoons of vodka made the dough TOO soft.

Of course, that could be due to many factors including the type of flour used, relative humidity, or even the heat of the day.

I also found the method as described in the magazine for adding the vodka and water to the dough was a bit "too complicated and fussy". by removing the dough from the food processor and then adding the liquids and "slapping" it into the flour.

I do find Cook's Illustrated to be a little over the top with their methods.

"I guess Cooks needs it to look very technical, but I prefer easy."

Once I make the "dough crumble" and need to add the liquid - I just open the chute of the food processor, dump it in, and hit pulse until it comes together in a nice ball.

If the dough does not come together in a few seconds, add a tiny bit more water and pulse a few more times. It should be good to go.

Allowing the dough to rest for a while in the refrigerator allows the glutens to relax which makes the dough flakier and more tender. It's also easier to work with.

When ready to roll the dough out, I have found it easiest to use a pie mat or parchment paper.

Since I don't have a pie mat, I use parchment paper and trace a circle, about 2 inches wider, around the pie dish I'm using.

This gives me a visual of how far I need to roll my dough.

You still want to use flour on the paper. Roll from the middle to the outside, turning the paper as you roll, keeping the dough about the same thickness all around. Then use the paper to fold it into fourths which can then be easily transferred to your pan.

This recipe makes 1 pie crust and the instructions are for a filled pie, such as pumpkin or pecan. If you are making a double-crust pie, double the recipe and do not pre-bake the crust. 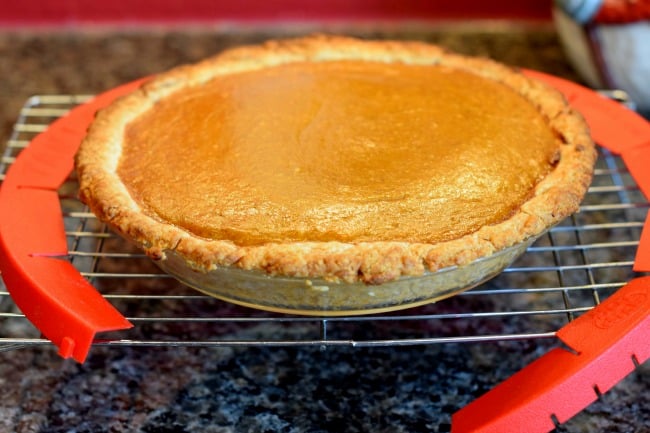 If cooking a filled pie, use pie crust shields or aluminum foil on the crust to keep it from burning. 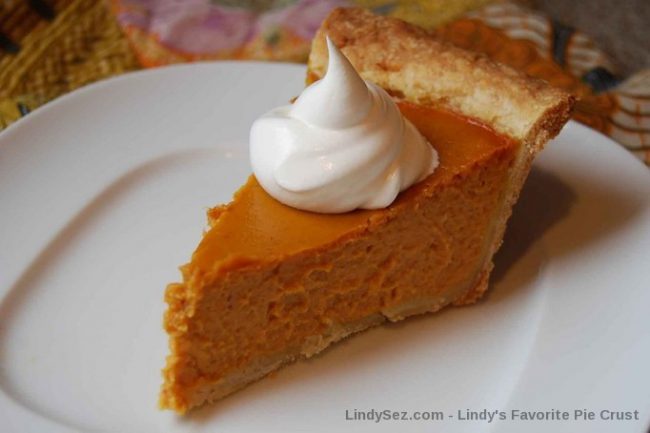 as used for a Pumpkin Pie 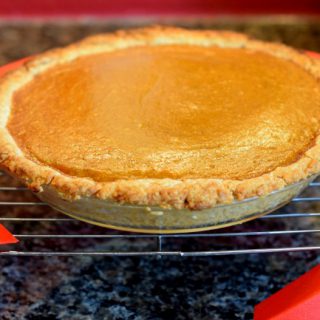 Allow the dough to rest at least 1-hour and up to 2 days in the refrigerator. May be frozen and thawed prior to rolling out, or roll out after resting and freeze until ready to use.
Keyword butter and shortening pie crust, pie crust using vodka
Tried this recipe?Let us know how it was!