A tasty combination of chicken, lime, and coconut milk, Thai Chicken with Saucy Rice Noodles is a quick dinner choice that is low-calorie and gluten-free. 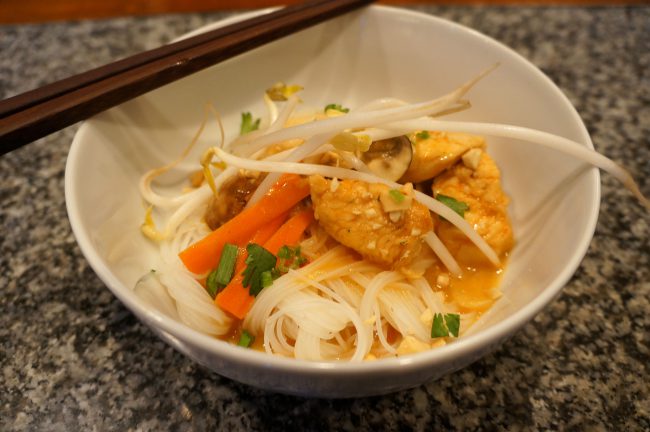 The Making of Thai Chicken with Saucy Rice Noodles

As a general rule, I like Cooking Light for recipe ideas, but I do find that their recipes lack a certain "depth of flavor" in trying to be all things to all people.  Low salt, low sugar, low fat, well, all those lows = low flavor IMHO.  But the recipes are easy enough to doctor up.  My recipe for Thai Chicken with Saucy Rice Noodles is the result of one of those easy to doctor up recipes.

The original recipe was written as Thai-Style Chicken Menu in 2005.

It starts well enough, marinating or brining the chicken in vinegar, brown sugar, fresh lime juice, and curry paste.  This simple marinade/brine not only flavors the fairly flavorless bite-sized chicken pieces but the acids in the lime juice and vinegar actually change the texture of the chicken, making it much more tender.

It's the same principle as using buttermilk (another acidic ingredient) to brine the chicken pieces in my recipe for Simply The Best Fried Chicken.  It just makes the texture better.

The marinade/brine works its magic in as little as 15 minutes.  So while you might be tempted to skip this step, don't.  It makes a huge difference in the flavor and texture of the chicken.  And flavor is good.  Right?

If I had my druthers, I would rather use regular coconut milk when I cook.  It's richer, silkier and has more "unami".  But it also has 552 calories per cup with a whopping 57 grams of fat (50 Saturated)...YIKES!  Light coconut milk is only 152 calories per cup with 13.6 grams of fat and while 12.1 of it is saturated, that's a much more reasonable number nutritionally, and on the scale.

I mean that scale in the bathroom, gym, or doctor's office.

A lot of people have jumped on the gluten-free bandwagon, some because they have to, some simply because they want to.  I'm trying to modify my diet to include less processed wheat, and using rice noodles helps me reach this goal.

Ounce for ounce, rice noodles, and wheat pasta have the same calories, and they both have the same amount of carbs.  But rice noodles, also known as maifun, are gluten-free.  And while they may not make a difference with your blood sugar (so if you have a problem with diabetes, treat rice noodles the same as you would any starch, with caution); I find that I'm much more satisfied with a smaller portion of rice noodles than I am with traditional pasta.  Less than 2 ounces per serving was fine with this dish.  It is also been proven that cooking pasta al dente is healthier for you, lessening the impact on the glycemic index; rice noodles are naturally al dente.  You don't cook rice noodles per se, just pour boiling water over and let them sit and soften.

The original recipe in Cooking Light was served as a "stir fry".  With rice noodles, being fairly bland, I decided to make it saucy, so I had some flavorful broth to eat with my noodles.  I also added some Sriracha for a little more bang, chicken stock to make it saucier, and added sliced green onions and peanuts to top it off.  It turned out delish, with a nice "depth of flavor".

I find it interesting that Cooking Light failed to add the noodles to their final calorie count.  Although the numbers look better that way, I've added them to mine since I figured they were kind of key to the dish. So here's my recipe for Thai Chicken with Saucy Rice Noodles (formerly known as Thai-Style Stir-Fried Chicken)

Check out these other GREAT Thai inspired easy saucy dishes: 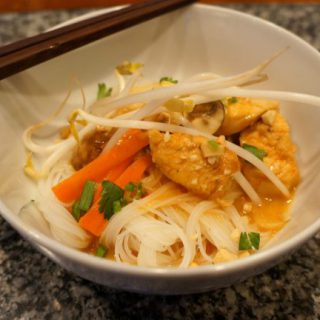