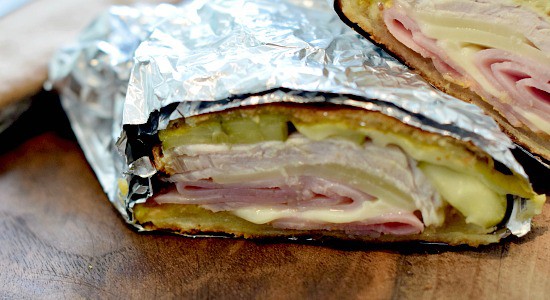 “This recipe for an easy Cuban Sandwich is so simple to prepare, can easily be made in advance and heated right before serving. Perfect for a picnic, lunch, or tailgating party.”

Prepare your panini press to the highest temperature with the grill side up. Or heat your grill pan on medium-high (cast iron works well here).

Prepare your rolls by splitting in half and spreading butter on both the inside and outside of the bread. Pre-stack the filling in this order - 1 slice cheese cut in half, ham, pork slices, dill pickle slices, remaining slice cheese, cut in half.

Place the rolls on the heated panini press, or grill pan. If using the press, close the lid and cook for 2 minutes or until grill marks show and the bread is toasted. If using the grill pan, place on the grill and weigh down with a plate that has a can or other weight on top to squash the bread, then turn and repeat so both sides are toasted. Remove to a cutting board.

Tear 4 pieces of aluminum foil, large enough to enclose the roll. Generously spread mustard on both sides of the roll. Place your prepared fillings on the roll then close. Wrap in foil. Place the foil-wrapped sandwich into the panini press, close, and allow to cook for about 4 - 5 minutes. If using a grill pan, weigh down the sandwich with the plate and can, turn halfway through the cooking time. Remove the sandwich from the press, wait a minute or two, then remove the foil. Cut in half if desired. Eat while hot.

{The making of a Cuban Sandwich}

Very popular on many menus, a Cuban Sandwich, or Cubano, is really a just a pressed ham and cheese sandwich that includes pork roast, dill pickles, and a LOT of mustard. They are very easy to put together, portable, and a great use of leftover pork roast.

My eldest son asked a while back for me to come up with a recipe for a Cubano also known as a Cuban Sandwich. Finally, after making a beautiful pork roast dinner, and having plenty of leftover pork,  I thought I would do him proud and come up with as close to authentic as I could.

The History Behind the Cuban Sandwich

Big surprise. The Cuban sandwich was NOT invented in Cuba – however – it was invented by Cubans, most likely dock workers in Tampa and Miami where a large population of Cuban people labored. After having made the sandwich myself, I can see how these would have been a popular lunch for them to take to the docks. The sandwich is easily prepared in advance, does not require refrigeration in the short term as everything is cooked, and can easily be reheated in a number of ways to give you a gooey, cheesy, satisfying lunch.

At lunchtime, a grill would be lit, and the workers would place their items for lunch on it to be heated and consumed. Tortillas, with grilled meats, beans and rice, and Cubano sandwiches could easily be heated up. The Cubano sandwich, being wrapped in foil, is natural to this type of cooking Just throw your wrapped sandwich on the grill, turn a few times, and voila, lunch is hot and ready to serve.

Perfect – It even has its own plate.

Ideally, you should use Cuban bread. If you live in Tampa or Miami or another city with a large Cuban population, I’m sure you can find that. I do not, so I decided to use a soft hoagie roll. It was going to get toasted anyway, so I figured it was the right size and shape. I do not recommend getting sourdough rolls, just regular French rolls – split in half.

Toasting the bread is one of the important first steps. You want the bread toasted so that it holds up to everything being placed on top of it without it falling apart. So butter it up and toast it on both sides using either your panini grill, if you have one, or second best, a heavy grill pan. If you have neither of these, a regular skillet will do the trick, just not look so fanciful.  You do need to weigh down the bread, so if using either the grill pan or skillet, put a plate on top of the roll and weigh it down with a can, flipping the roll once during the toasting process. Butter the bread well on both sides – you know the best way to soften butter is to grate it on a box grater right?  Then get it nice and toasty on both sides.

Now on to the other ingredients.

Swiss cheese, leftover thinly sliced pork roast, boiled deli ham, sliced dill pickles, swiss cheese (cheese on both sides gives you a melty sandwich and acts as sort of a glue to keep the sandwich together) along with a bunch of, gobs of, a plethora of, yellow mustard. So how you layer is important and make sure your pickles are patted dry. You could use whole pickles you slice lengthwise yourself, dill pickle slices, half dill pickles slices, anything BUT sweet pickles.

I repeat, do not use sweet pickles.

It’s easiest to stack the insides together for easy assembly.

So once the rolls are toasted, slather on the yellow mustard, then add your stack of filling. Close the sandwich and wrap in aluminum foil.

On to the Finish

It is best if you have made the Cuban sandwich in advance and refrigerated it to bring it to room temperature prior to cooking it.

Heat your panini press or grill pan to high heat, then place the sandwich, in the foil package, onto the grids. Close the panini press or place your plate back over the top of the sandwich, and cook for about 4 – 5 minutes. If using a grill pan, turn halfway through the cooking time.  Allow to rest for a minute or two, open, cut and there is your perfect Cubano Cuban sandwich.

If you are taking these to a picnic or tailgate party, just throw the sandwich onto a hot grill, turning it occasionally until it’s hot through and through.

And there you are! A perfect Cuban Sandwich.

No grill? You could also place it into a 350ºF oven for about 30 minutes to get everything hot and melty. You won’t get the same crispness, but it will still be tasty.

Use left-over pork roast for these Easy Cuban Sandwiches such as my recipe for Roasted Pork Loin with Apples and Onions (sans the apples and onions). 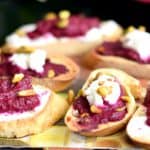 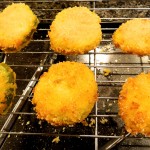 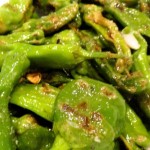 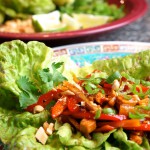