Made with mild olive oil these light crunchy Chocolate Cherry Biscotti with Pistachio are perfect with coffee, tea, or milk. Or just all by themself. And as a bonus, the recipe includes two totally different biscotti from the same basic recipe, with the possibility of a third!

The story behind Chocolate Cherry Biscotti with Pistachio (2-ways)

Do you remember the days when you would look up a recipe and there weren't any photos on it? No photos at all??? This was one of those recipes. I wrote way back then, over 10 years ago. I published it for my then client Colavita, put it up on group recipes and that was that. It's since been sitting in my From the Kitchen of LindySez blog as "unpublished". So I decided it's time to publish. That's one good thing about a good biscotti, the recipe never grows old.

MY original recipe was just for the blonde cookie with chopped chocolate, tart cherries,  and pistachio nuts. So I baked up a batch, put them into my airtight container, and went to bed. Photography to be done tomorrow.

One of the problems with being a recipe developer is you can't always stop developing. As I lay there waiting for sleep to overtake me, I thought about biscotti. What if, what if I put some cocoa powder into the dough rather than chop the chocolate into it? I ran the suggestion through my chocoholic husband and he liked the idea a lot.  So in the morning, that's exactly what I did. I made the chocolate cookie version of Chocolate Cherry Biscotti with Pistacchio.

And they were good.

But was one better? Off to do some taste testing. 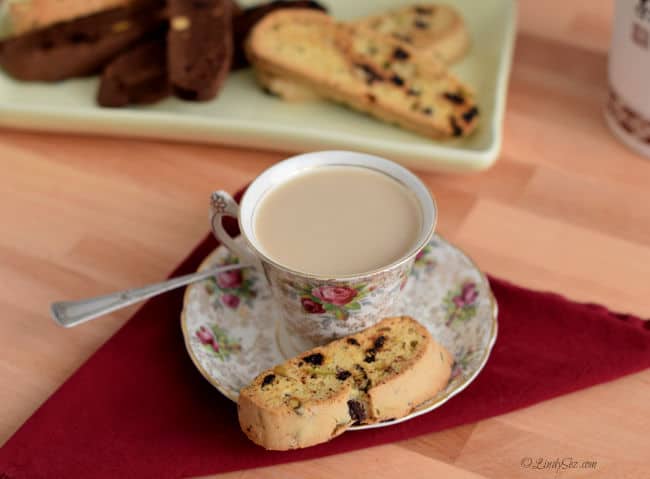 I took the biscotti to one of my favorite wine tasting rooms here in Napa city, The Gabrielle Collection, where they do some very innovative food and wine pairings, including a breakfast pairing. I trust the palates of these wine tasting room managers and workers. And the verdict was - they are both good. Excellent. Nice taste, nice textures. They did seem to prefer the blonde one with white wine, and the dark chocolate one with red wine. Well of course they tasted with wine, it's a wine tasting room...but they all agreed either would go well with coffee, tea, or milk. For just snacking, it was a split decision, those who loved chocolate, such as my hubby, preferred the bold rich taste of the chocolate biscotti, the other half enjoyed the more nuanced use of chocolate in the blonde biscotti.

So I chose not to choose just one recipe to publish, but tandem the two together. So the choice is yours. 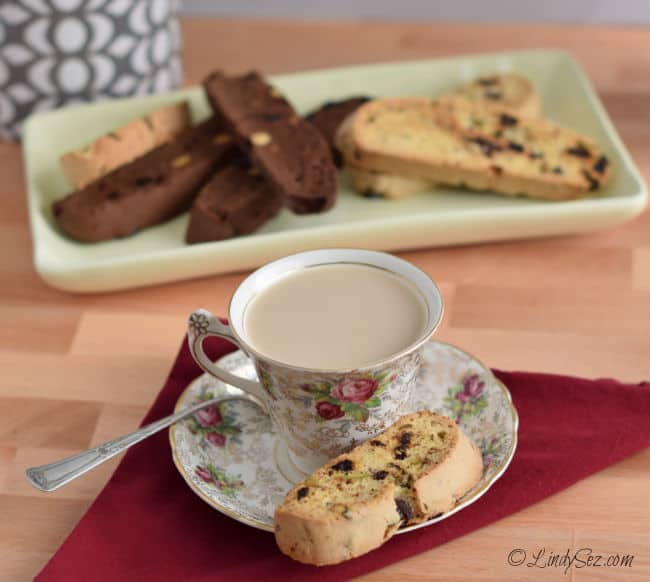 OK. Enough with the story. Now on to how to make Chocolate Cherry Biscotti with Pistachio.

According to Wikipedia -  Biscotti (/bɪˈskɒti/; Italian pronunciation: [biˈskɔtti]; English: twice-cooked), known also as cantucci ([kanˈtuttʃi]), are Italian almond biscuits that originated in the Tuscan city of Prato. They are twice-baked, oblong-shaped, dry, crunchy, and may be dipped in a drink, traditionally Vin Santo.

That's the original. Almond, anise, crisp, hard, biscuits. But biscotti have come a long way in the culinary world and are now made with many different flavors and tastes. So basically the only thing that remains true to original biscotti is they are twice baked, once in loaves, then cooled, sliced, and rebaked as oblong cookies. 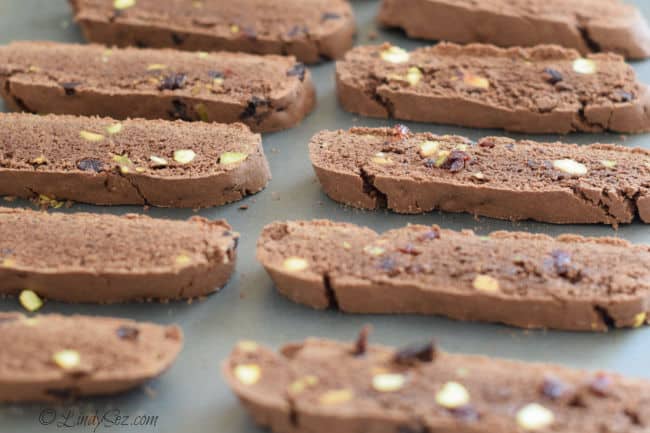 Ready for the second cook

The Ingredients for Chocolate Cherry Biscotti with Pistachio

Since both recipes use the same ingredients, except how you handle the chocolate, let's being with that...the chocolate. 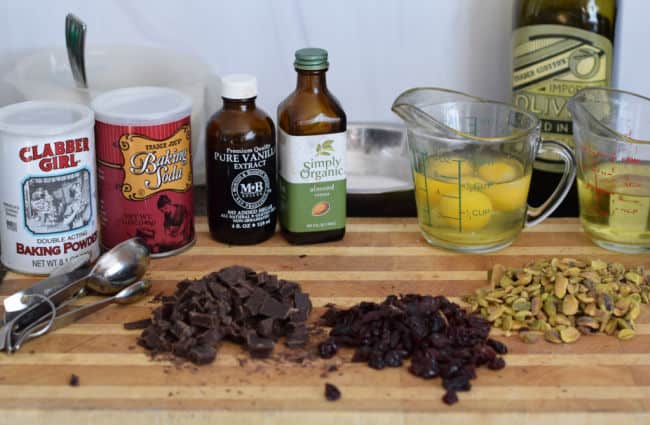 Bittersweet or Semi-Sweet Chocolate bar - When making biscotti #1, the blonde biscotti, you need to use a bittersweet, or semisweet chocolate. Get a bar that is at least 69% cocoa. The one I used was 80% cocoa so it was very melty.

Wny not to use chocolate chips in Chocolate Cherry Biscotti?

To help keep their shape, chips have less cocoa butter and contain added stabilizers. Baking chocolate bars are created to melt quickly and smoothly, so if a recipe calls for melted, it's best to use the bar form. When making cookies, go with those chips.

When making biscotti #2 - the Chocolate chocolate cherry biscotti, use a good unsweetened cocoa powder, not Dutch process. Dutch-process cocoa or Dutched cocoa is cocoa that has been treated with an alkalizing agent to modify its color and give it a milder taste compared to "natural cocoa" extracted with the Broma process. Because the process modifies both appearance and flavor, I prefer to use unsweetened cocoa powder. There are many good brands out there, I like Ghirardelli.

Dried Tart Cherries - In trying to keep these biscotti from being too sweet, I used dried Montgomery cherries that are semi-tart. You could use a sweeter cherry if you want to. Or even could try dried cranberries in place of the tart cherries.

Give the whole cherries a little chop, keeping them about a ¼ inch dice. Because they are so sticky, I found tossing them in some flour before adding them to the dough helped them stay distributed in the loaf and biscotti. If you don't toss them in flour, you stand a chance of having them all bunched up in one place. So toss them with flour and get them separated prior to adding them.

Shelled Pistachio Nuts - BB though my choice of nuts was odd. That was until he tasted them in the cookie. I find pistachio nuts to be rather buttery and sweet in flavor and thought that would be a perfect complement to the tart cherries. I used dry roasted, salted, shelled pistachio.

If you don't want to use Pistachio nuts, a good substitution would be roasted cashew nuts as they have the same buttery flesh. Both nuts come in around 157 calories per ounce, with 12g of fat, and are good sources of magnesium, phosphorus, and copper.

Mild Olive Oil or other Neutral Oil - It might seem strange baking with olive oil, but it's not. When I first developed this recipe I was the official chef for Colavita USA, developing recipes using their products. Their main product being olive oil, I was not allowed any butter in my recipes. That said, their olive oil is very mild, without a lot of grass notes. You want to use olive oil that is mild, not a highly flavored one. Obviously Colavita brand is mild, so is Trader Joe's imported olive oil, as is Kirkland brand. I'm sure there are more out there, just use regular extra virgin or mild olive oil.

My recipes are all already modified to use the correct conversion from butter to olive oil, which is usually around ¾ oil to 1 butter so no need to do the math - it's done for you. I like using olive oil in baking as it's a healthier alternative to saturated fats AND I think it gives these biscotti a more tender bite. 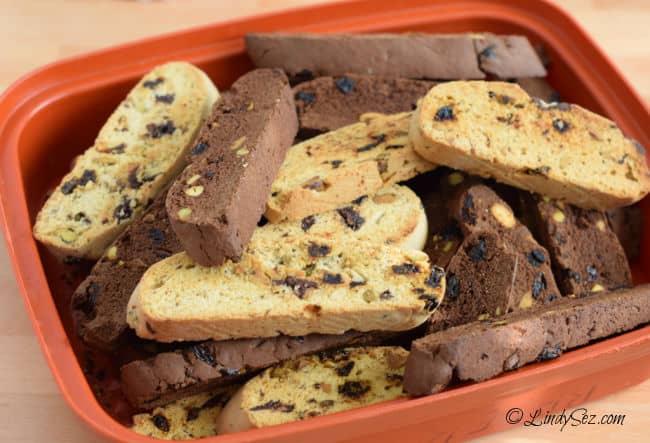 These biscotti keep well in an air-tight container in a cool dry place for up to two weeks. But I don't think they will last that long! 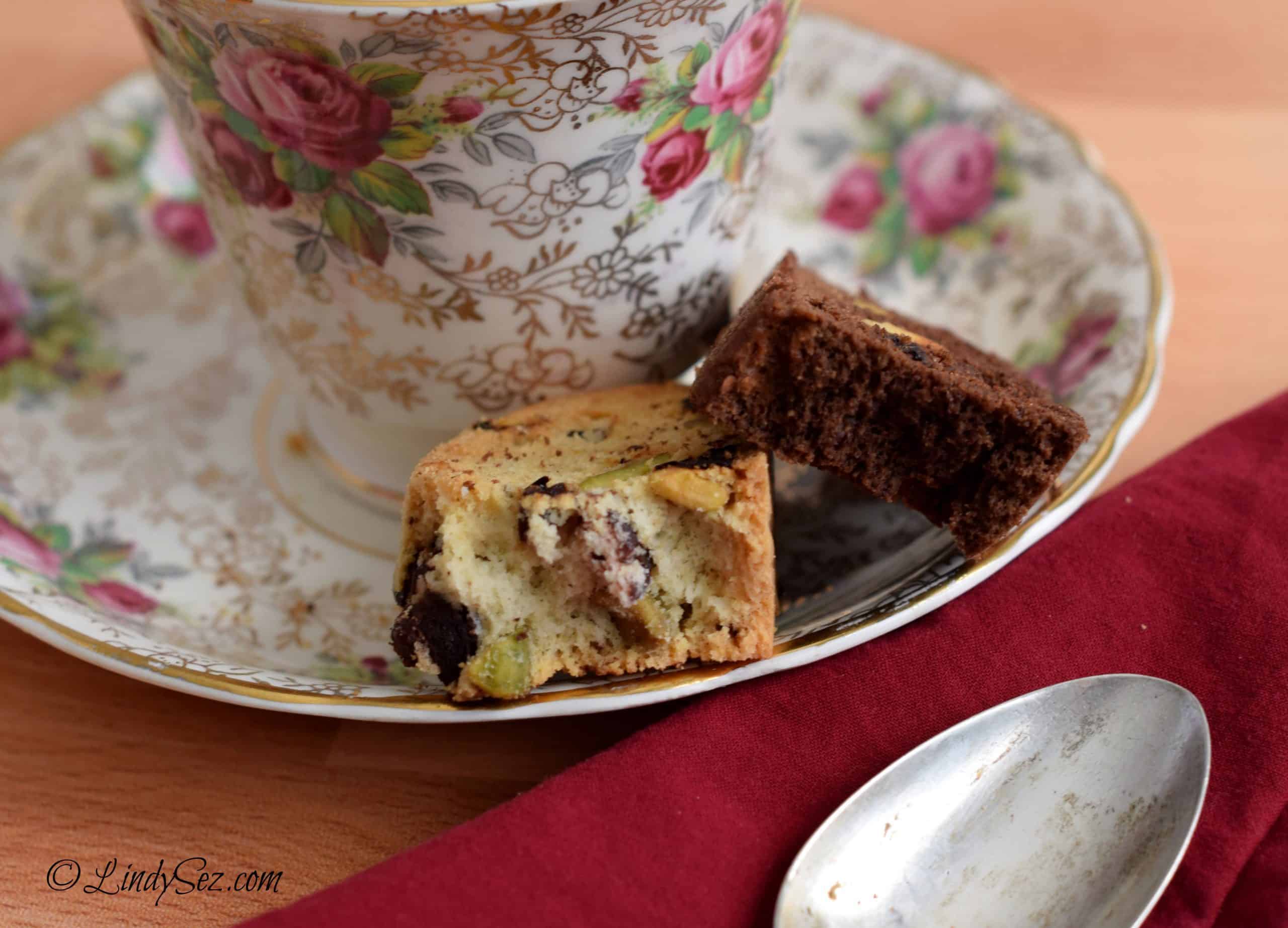 These really are a very nice tender biscotti, perfect for snacking or dipping. I do hope you will try them, or as my mind goes on to that real chocolate lover, maybe add the chopped chocolate pieces to the chocolate dough and have Double Chocolate Cherry Biscotti with Pistachio? 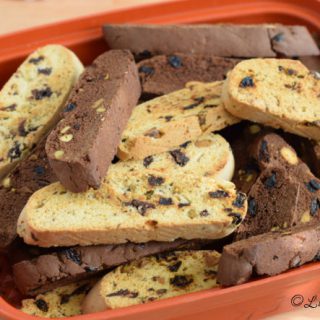 Did you know that you really can't overmix the sugar and oil? So make sure you get all the graininess out of the sugar before you start adding the eggs.