So I'm doing four cooking demos at the Home and Garden show here in Sonoma County this weekend and decided to do it on Zucchini Spaghetti; an idea I came up with about five years ago.

Zucchini Spaghetti was one of the first videos I did and posted on YouTube - it came to be as we had a garden full of zucchini that year and I needed to think outside the box of ways I could prepare it and thought "Well, I'll just make it into spaghetti-like threads and use it like pasta".

It was quite innovative in the day.

Five years ago you didn't find zucchini spaghetti, or as it is more commonly called now, Zoodles, in many recipes.

Spiralizers were not hot commodities in the market, nor were julienne peelers.

With the onset of Paleo, raw eaters, vegans,  gluten-free, and the meatless Monday uprising, zucchini spaghetti has become much more common in many recipes and on many recipe sites.

As I said, I'm doing cooking demos and I wanted to put together a "take-away" packet with the recipes.

And then I realized, I've never written the recipes from my video into my site. Oops. So that's what I'm doing now. Writing the recipes.

My video of how to cook Zucchini Spaghetti

This recipe for Zucchini Spaghetti with Tomato Sauce is so easy to make, and perfect for a quick, low-fat, no-carb, gluten-free lunch or dinner, done in about five minutes.

I use my mandolin to julienne the zucchini, taking only the firm outside part of the zucchini, leaving the soft middle and seeds aside.

My chickens love the soft middle and seeds; but you could also use them to make a delicious soup, such as my recipe for Curry Zucchini Soup.

When I made the video I did not use the handguard and I get yelled at a lot in comments for not doing so.

I didn't use it because the prongs on the handguard which holds the vegetable into place would have ruined one whole side of the zucchini.

I know a mandolin is sharp and used great care in keeping my fingers out of the way. 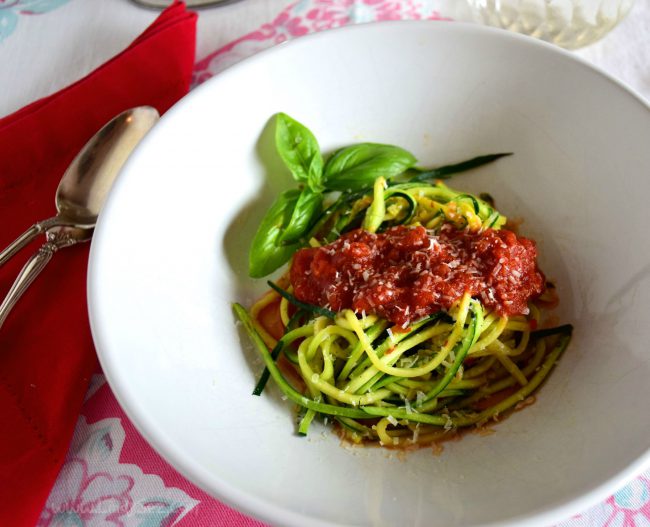