Home » Uncategorized » Oh where have you been LindySez LindySez?

Oh Where have you been Oh LindySez - LindySez? LindySez has been MIA - here is the story of her adventures with India and updating LindySez.

No, it was not the COVID, it was the INDIA.

Back in November of 2019, you know, that time long ago when life was easy and you could walk freely. Go to a bar, meet friends, theatre, amusement parks, hell, get your hair-cut and a mani-pedi, you know, back in the old days?

Back in those days, I had a brainstorm. Yes, I thought I would try to update my site LindySez.com to make it a more friendly user experience. You see, I started my site almost 10 years ago, and while I think it's still a beautiful site filled with delicious recipes, Google and SEO don't totally agree. My format is old they say. My hierarchy is outdated. I need to use more modern language. More modern formats. Blocks. So I thought I would pay to have that done.

I always got a lot of messages saying that company A, B, C, D, whatever, could improve my site, my user's experience, get me on the top of Google search. YES, that would be nice. But I never pushed the button to reach out to see what they could actually do for me. Finally I did.

For $600.00, this company that shows its base in Houston TX, Aelosys, said they could

I gave them my information to start work, sent the money, then waited. And waited. And waited. As I wrote to them something felt off. That's when I found that the Houston, TX address was not a real address, this company worked out of India, and Matt Brown was not a person you could contact. I worked through Sonia, the "Project Manager".

OK, time difference creates delays, I can live with that.

I bought the new theme and they started a "transfer" of my site to it. Seemed to have a few problems as we went along, but they seemed also to be fixed in a short period of time, one or two days, so we progressed.

Actually my original LindySez site was working properly during all this going back and forth, and finally, in December, 8 weeks later, they sent me a test site with the new format. I started doing my "due diligence" checking posting and recipe links.

I found problems, I reported problems.

Hi Sonia, I seem to have missing images on these recipes.

Hi Sonia, I seem to have missing methods on these recipes. 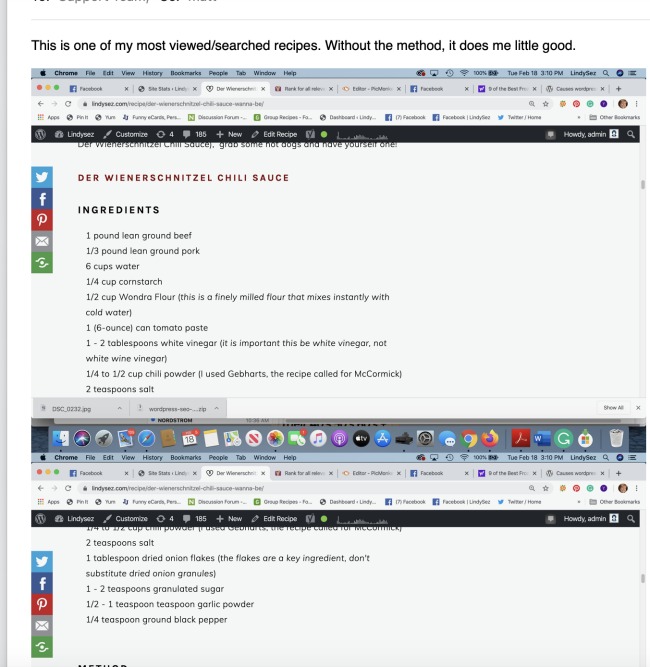 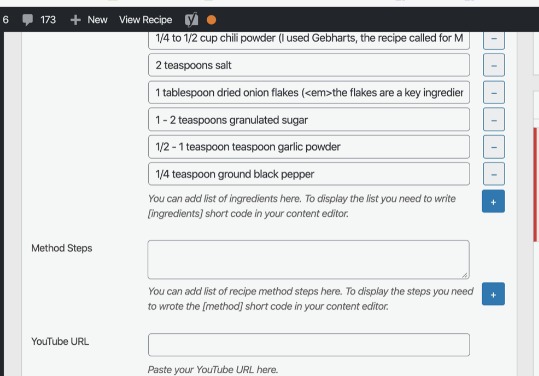 Because as you can see, the methods ARE missing. As if they never existed.

Sonia says: Greetings of the day Lindy, yes, that is because you are currently on two different platforms. Once you go live, when you like the design, these errors will go away.

I believed them. I'm not a programmer and I trust too much. I should have asked my peeps more of what they thought. So stupidly, I said, then let's go live. 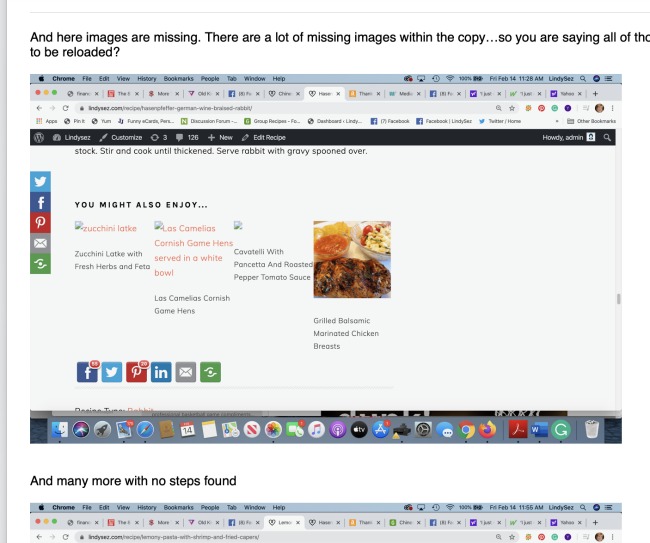 No, the errors did NOT go away. No the images that were missing did not suddenly reappear. Methods were missing - that's all the instructions, right? Or the images were missing. Ok, admittedly many of my images SHOULD disappear, but at least there was an image, not a big blank space.

Mobile was the worst, this was the crap you all were seeing. 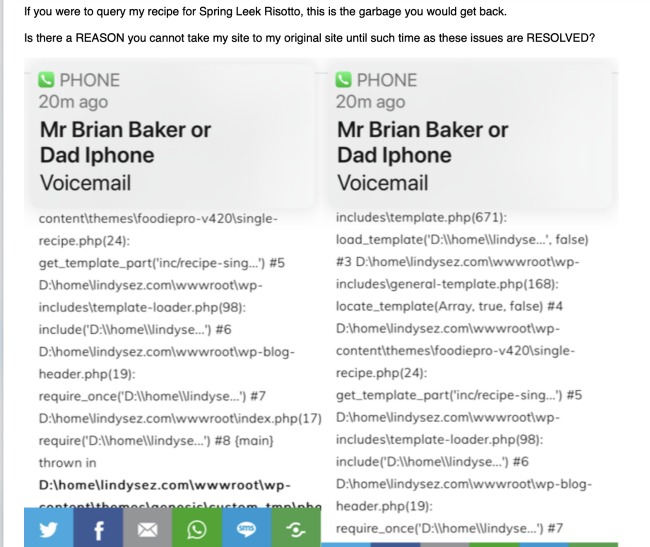 This is not good. So I asked them to put it back to the original site, that they had promised they had made a back-up of. 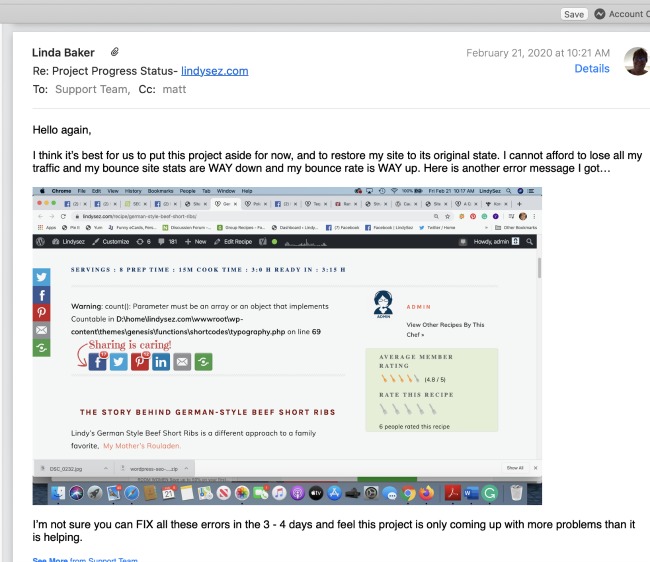 Greetings of the Day Lindy. We are sorry but we have done so much work on your site to change the format we do not want to change it back. Although we have put in more time than it should have taken, we will not ask you for more money. We will try to fix it over time.

Google is a punisher to sites that are not SEO friendly. Punisher. My Google search went from (while not all that impressive) 500 searches per day (also the reason I wanted a new modern theme) to a mere 80 per day, or less.

So what does a blogger do? I try to fix it. Working on this broken platform I start finding photos from my library and reinserting them into posts. But how do I recreate missing methods, many of which were very detailed and complex. Such as Roasted Vegetable Beef Stew, or Lindy's Ultimate Huevos Rancheros? I know I could recreate them, but it would be hard - and very time-consuming.

Then a friendly fellow blogger told me about the "Wayback Machine" a magical place where all old copies of blogs reside. As it was up to date as of 2017, I could go and grab, copy and paste, and fix these errors.

So I started my campaign to fix the unfixed and at least get my recipes, photos, methods, stories, all back together. All 500 of them.

After 2 weeks of diligently working on my fixes, my eldest son Chris calls. "You know Mom, " he says, "you might want to contact Rob Alex, you remember my friend from Long Beach - he's very computer savvy, he may be able to help you with this. "

I contact Rob, explain the situation and he says, "Oh yeah, I can help I think, let me look about and see what I find".

So on March 31, 4 months after it should have been done, Rob tells me he found my original site and can reinstate it, exactly as it was, before this all began.

I was so happy to see my old format, my bad SEO, my everything back where it was supposed to be doing what it had always done.

So what have I been doing since COVID-19 and the lockdowns?

While the rest of the world seems to have learned how to bake bread, I have been learning how to make "recipe cards". And working on making sure my format is all the same on every post so all the former piecework can be properly transferred to a new theme, which will, hopefully, give you a better experience with my blog. Because, yes, I do still plan to move it to a better more modern theme to make Google happy. And you too. And maybe even me.

But this time I will be much smarter, and much less likely to just accept what is being said by said experts. Check and double-check. And if it doesn't work in testing, I know it won't work in reality. That's the biggest lesson learned. And I also have a list of 50+ recipes that definitely need a new photo. So there's that. BB and I are excited to revisit some of my older, original recipes. It's been a while.

I do hope you will stick with LindySez for future inspirations. I promise the next move will be painless and transparent, at least to you.

And least we forget our new mask design. 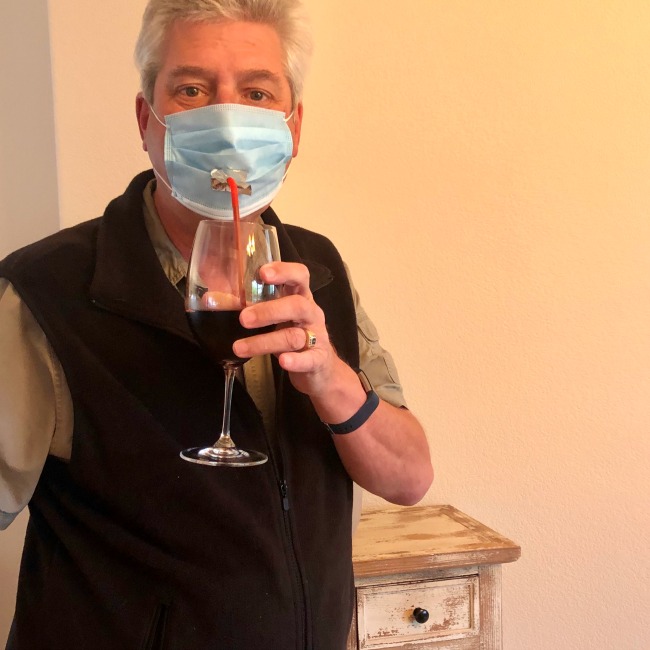