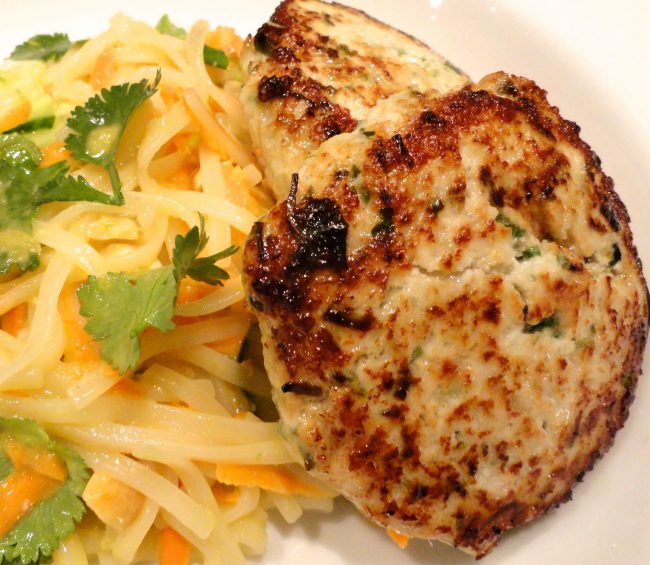 As I was looking through an old Best of Gourmet cookbook, I came upon this meal plan where they combined these Thai Style Chicken Patties with a Rice Noodle Salad.  Loving the Thai influenced flavors, with the added plus of being easy and low-fat, I thought “There’s something I could do with this”.  The original recipe just seemed a little flat.  Well, it was written in 2003 and we have come a ways in culinary skills and adding worldwide influences to our food, so I did a bit of modification and came up with a dinner that had a deeper flavor, was still easy AND still low fat.

And, as it turns out at the end of the day, without the added bread crumbs, is gluten-free.  Added plus.

This recipe calls for chopping chicken breast in the food processor until coarsely chopped.  If you don’t want to do this, you could purchase ground chicken, just make sure it’s all white chicken breasts.  Or at least make sure it is if you want the calories to be low.  If you don’t care, then you could make this with some ground dark meat or even a combination of both.  Dark meat generally has more flavor than boneless skinless breast meat, but with all the flavor I added to the meat, I think the breast meat is just fine.

I added some lime juice, fish sauce, lemongrass, and ginger to round out the original recipe.  The meat seemed a little soft so a touch of panko bread crumbs was added to give a bit of texture (if going gluten-free, omit this).

I always say, whatever floats your boat.

Using on/off pulses, pulse the chicken in the work bowl of a food processor along with the lime zest, juice and fish sauce until coarsely chopped. Remove to a large bowl.

Add the water chestnuts, green onion, jalapeño, lemongrass and ginger to the bowl. Chop finely using on/off pulses. Add to the chicken along with the cilantro, panko and a bit of salt and pepper. Mix well.

Take a small teaspoon full of the mixture and form into a ball, then set in the microwave for 30 seconds or until cooked; taste for seasonings, adjust with salt and pepper if needed.Form mixture into patties.

Heat a skillet over medium heat until hot, add the oil then the patties. Cook, turning once, until browned and cooked through; about 6 minutes per side. Serve hot. 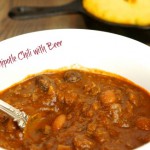 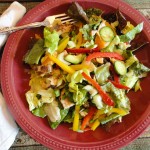 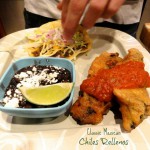