Sweet and Sour Red Cabbage was a staple during the winter in my childhood home. This recipe is one of my favorite ways to make this versatile vegetable. 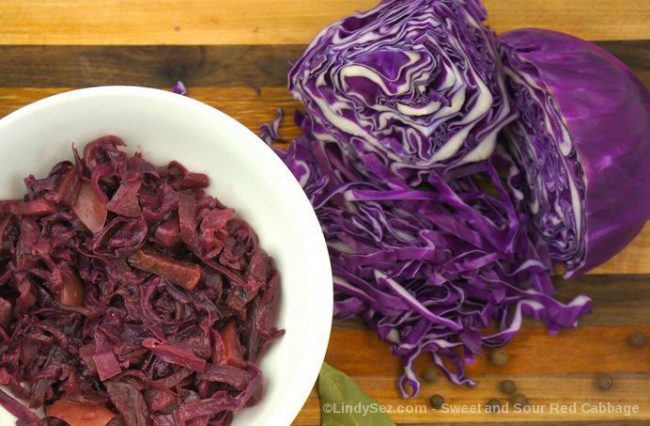 Behind the scenes making Sweet and Sour Red Cabbage

Sweet and Sour Red Cabbage was a staple during the winter in my childhood home.  With so many different ways to make it, with apples or without.  Sweet, or more savory?  Crisp-tender or long-cooked?  This recipe, with bacon, is one of my favorite ways to make this versatile vegetable.

Sweet and Sour Red Cabbage is Quick and Easy

This recipe is very simple to make and takes about 15 - 20 minutes tops. It centers around the bacon and bacon fat which gives it a smoky flavor. The sweet is brown sugar, the sour is balsamic vinegar. You could use apple cider vinegar in place of the balsamic, but I like the deeper flavor balsamic gives.

How to Best Buy Cabbage

When you buy your cabbage, buy it as a whole head or ask the produce person to cut one in half fresh for you. While some stores sell half heads, you don't know how long that cut cabbage has been there. So fresh cut, or cut your own and use the other half for something else - like a tasty slaw. Cabbage does store in the refrigerator well, cover the cut side with some plastic wrap and you have probably got at least two weeks before you will see any noticeable change. Maybe you will be ready for another meal of sweet and sour red cabbage by then? Or change it up with my German Style  Red Cabbage which uses apples.

Serve with My Mother's Rouladen and some Mustard Thyme Spatzel to make a true German-style meal!