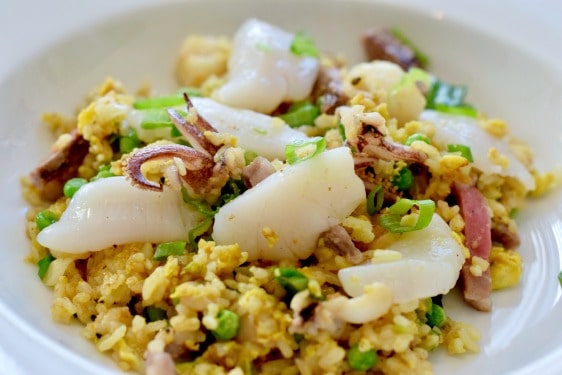 Prepare all of the ingredients and set aside.

Heat the oil in a wok or other large heavy skillet; when hot add the rice, breaking it apart with your fingers, along with the minced ginger and sliced white onion parts. Add about 1 tablespoon butter and stir it in. Cook, stirring occasionally for about 3 minutes, or until the fragrant.

Make a well in the center of the pan, add 1 teaspoon butter along with the eggs and scramble them until set, then mix them into the rice, combining them well.

Add the curry powder over the top, then shake about a tablespoon of the soy sauce over; stir into the rice and eggs mixture.

Stir in the shrimp and squid (if using), along with another tablespoon or so of butter, stir-fry for about 2 - 3 minutes or until the shrimps just begin to turn pink and the squid is becoming opaque, add the peas, large pieces of green onion, along with the steak (if using raw steak add it with the shrimp and squid) and stir to combine well. Cook for 2 - 3 minutes. Taste and adjust, adding more curry or soy as needed. Season the scallop with a bit of salt and pepper then lay them over the top, cover briefly, about 2 minutes -uncover. (The scallop should be just opaque but still slightly raw.) Sprinkle with the small green onion tops and serve.

{The making of Surf and Turf Curried Fried Rice}

It started with a piece of leftover steak.

Our Sunday dinner included a grilled steak – which I served sliced with a vibrant Chimichurri sauce. Since it’s just BB and me,  I had left-over steak. I always seem to have left-over steak and the issue is always what to do with it. Sometimes I reheat it and put it on a salad, especially good with arugula, or romaine and blue cheese crumbles. Sometimes I make a quick version of Five Spice Beefy Rice Bowl for lunch, and sometimes, unfortunately, it just sits in the refrigerator until it grows mold and I toss it.

I asked BB for his opinion. A lover of fried rice, that was his first suggestion. “And maybe,” he said “we could put some shrimp in it.

Sounds good to me. But I can’t just leave it there. I have to make it even more. So I did. And I did it good. I think this is the best Surf and Turf Curried Fried Rice there is.

First up – the rice.

It is always best when making fried rice to use old cold rice. Not dried out, but a day old, or two, or even three or four days old is good. The lack of moisture in the rice helps to absorb the flavors. That’s not to say you can’t make it with freshly made rice, it just won’t be as good. Mushier and wetter. Not so much fried as steamed with flavors. I have, when I decide at the last minute to make fried rice, cooked my rice in the morning, then put it in the refrigerator, uncovered, to cool and dry a bit. Most refrigerators are self-defrost and that removes a lot of moisture from food, good reason to keep things covered you want to remain moist, and a good way to remove moisture when you have a need to.

Second up – the proteins

As I said, this started with a leftover piece of grilled steak. It was grilled with just salt and pepper since I was making the Chimichurri sauce to go on top, so it’s a pretty basic piece of medium-rare meat.

If you don’t have leftover steak, use a nice piece of filet. It doesn’t take long to cook and it going to be tender.

Then I went to the market and saw these beautiful fresh scallops. One of BB’s favs in the whole wide world so I have to add that to the mix.

Now I had a dilemma. With all these different proteins, requiring different cooking times, how was I going to put this all together?

I started with the steak. Since it was partially cooked, I didn’t want it to get overdone. So I cut it into match strip pieces. Just sliced the steak into slices about a quarter inch thick, then into strips the same width.

I figured the shrimp and squid (calamari) would take about the same amount of cooking time, you don’t want to overcook either or they become tough. So a quick, less than 5 minute cook time seemed about right.  After peeling and deveining the shrimp, I cut them into “bite-size” pieces of about 1/2 inch. The squid I cut into rings right around a quarter inch thick, the tentacles I cut in half for easy cooking and presentation.

If I had gone with just the steak and shrimp, I probably would have made my stir-fry the exact same way as my Easy Pork Fried Rice. But with the additional seafood elements, I felt it needed just a little bit more. I didn’t want to change it entirely, just add some flavor that would really compliment the meat and seafood.

Ginger – minced ginger added a perfect depth of flavor to the dish.

Green onion – I did the green onion 3 ways. First, the white parts were slice to be in the body of the dish -rather than using a yellow or white onion. Second, the green tops were cut in two ways, one part larger to be added to the rice, the other sliced thinly as a fresh garnish. Perfect.

Curry Powder – I thought long and hard about this as I didn’t want the stir-fry to become an “Indian” dish. I used the curry powder very sparingly, just enough to sprinkle over the top of the rice, then I mixed it in. All in all, I used less than 2 teaspoons, but probably a bit more than 1 teaspoon. I would suggest you start with one and then adjust at the end.

Soy Sauce – As always, low-sodium. And about half as much as I normally would, which could be up to 2 tablespoons or more. I used a bit more than 1 tablespoon, but again, start there and adjust when you are finished.

BUTTER – When I read though fried rice recipes, I find many of them use very little or no butter at all. Why not? Butter adds so much rich flavor. And if you have ever been to Benihana or any other teppanyaki style restaurant that makes a great fried rice, they use a lot of butter. I add a bit with almost each and every element of the dish. Butter makes it better!

Eggs – Scrambled. Make sure you mix them well prior to adding them to the pan, and if you don’t have room to scramble them outside of the rice, do the eggs first. Scramble them in the oil, with a bit of butter, then add the rice, ginger, and onion. But really, you just need a little hole in the middle of the rice to get the egg set before incorporating it into the main part with the rice.

The rest – Peas. NOT peas and carrots. Just the peas, please. If using fresh, parboil until tender. If using frozen allow them to thaw – at least partially.

Now let’s put this together.

As we don’t want to overcook the seafood, the rice needs to be mostly ready before adding the rest of the ingredients. Get your pan nice and hot, add the oil, then add the rice along with the ginger and onion. Stir-fry this, adding a bit butter (flavor) until the rice is starting to look fried. Now make your well, add a pat of butter and cook the scrambled egg with soy sauce until set, then incorporate it into the rice. Sprinkle the curry powder over the top, dash dash of soy sauce, mix mix, stir-fry stir-fry.

Now comes the shrimp, squid, and steak, if you are using fresh meat. Get that all into the rice, and add the peas with the larger slices of green onion. Cook this for about 3-minutes, taking care not to overcook the seafood and hopefully keeping your meat rare.

Here was the tricky part. I didn’t want to overcook the scallop, and I didn’t want it to disappear or break apart in the rice, so I decided to just lay the thin slices of scallop over the top of the rice mixture, cover with a lid and allow it to steam for about 2 minutes. It was perfectly cooked. Warm, tender, scallop.

So in about 30 minutes time, my new tiny kitchen of LindySez turned out a dinner, that was huge in flavor and texture.

I hope you try it soon, in your, whatever size it is, kitchen. 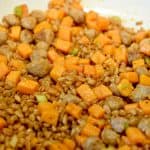 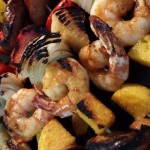 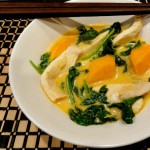 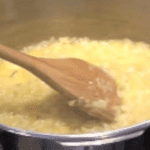 Cooking Risotto in a Pressure Cooker