Smoky Split Pea Soup is a dump soup that is so versatile. Cook it in a crockpot, pressure cooker, or simmer slowly on the stove-top.

What could be easier, or more versatile than a soup like this Smoky Split Pea Soup?

Easily cooked all day in a crockpot, cooked quickly in a pressure cooker, or even slowly simmered on the stove-top, Smoky Split Pea Soup is perfect for lunch or dinner. And most of us have or should have the ingredients on hand. Split peas, onions, carrots, a ham bone, or a couple of meaty ham hocks. What? Don't you keep ham hocks in your freezer? Well, you should. They come in handy for both this soup and my Ham and Navy Bean Soup.  But if you don't, you could substitute, with some success, either smoked kielbasa cut into cubes or even bacon.

Split peas come either green or yellow. While they are both the same for flavor and cooking times, I find it best to choose one color or the other to keep the color of the soup true, not murky. My personal color preference is green, but if yellow floats your boat as being a more appetizing color, go for yellow.

Split peas are high in protein and low in fat, containing only one gram of fat per 350 calories. Most of the calories come from protein and complex carbohydrates. The split pea is known to be a natural food source that contains some of the highest amounts of fiber, 26 grams per 100-gram portion Fiber, of course, helps the digestive system and makes you feel full and satiated.

I love this soup as it's more of a dump soup. No sautéing needed, unless using bacon. If using bacon, fry it up a bit to cook it just a little and to release some of the fat, then add the other ingredients. Otherwise, just put everything into the pot, turn on your heat, and let it go to town. About 6 hours on high in the crockpot, about 30 minutes in the pressure cooker. 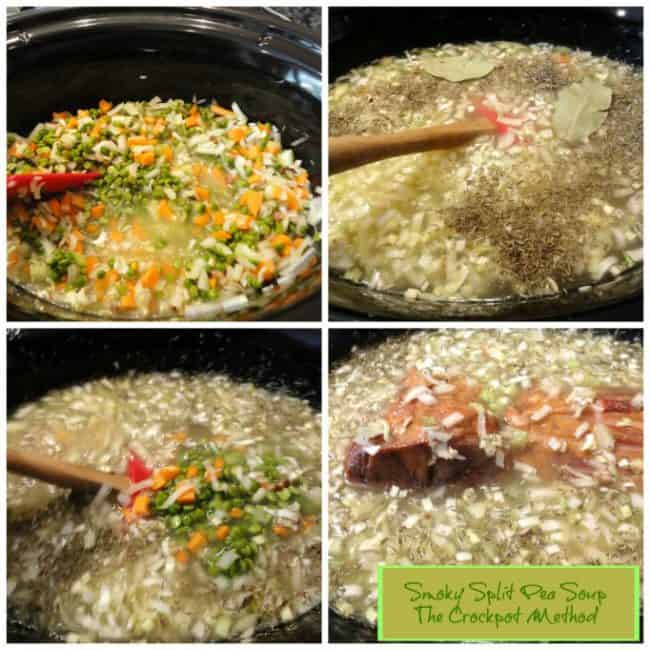 30 minutes in a pressure cooker ... now that's fast food I can get behind.

This soup freezes beautifully, so whenever I make it, I make extra. Instant lunches. Instant dinners. I like instant.

One thing I have noticed about split pea soup, and this Smoky Split Pea Soup is no different, the soup seems to thicken as it sits; so be sure to thin it with a little water, or chicken stock when reheating.

I love using old rye bread to make croutons. The crouton adds a nice crunch. In this case, I had some very dense German-style rye that I cubed and baked in a 325º oven for about 10 or 15 minutes; just until they get crisp. You can toss them in a little melted butter first, but I don't find that to be necessary.

Not necessary, but good...

And if you have trouble finding good rye bread, like I sometimes do, then you can make your own with this recipe for A Quick, no Knead Crusty Rye Bread.

So pick a pot, throw in some split peas and a few veggies, and let's make some Smoky Split Pea Soup. 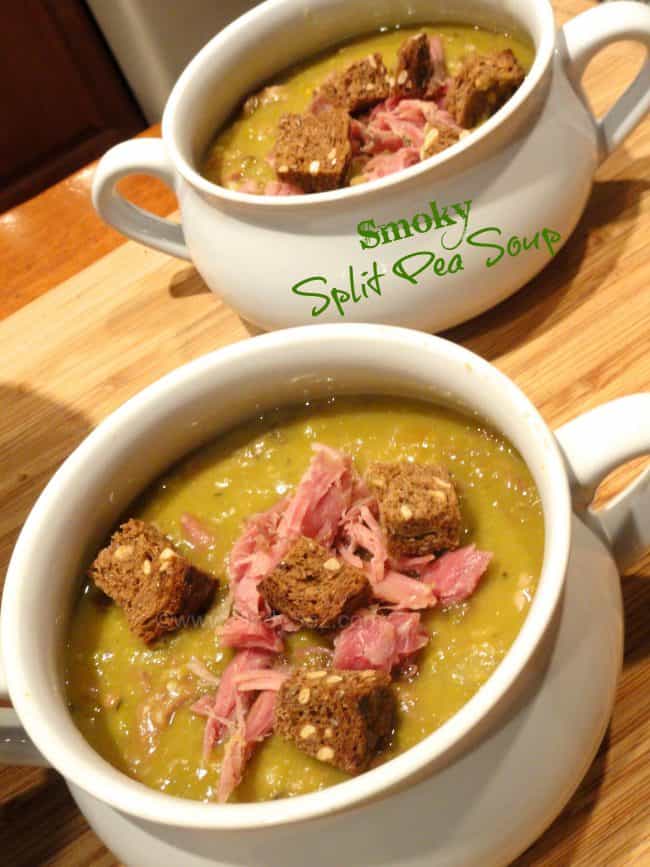 LindySez: Just a drizzle of sherry in the soup brings it to life. 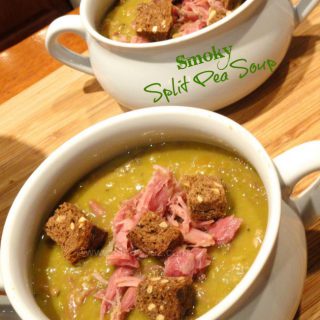 Cooking times will vary according to your chosen cooking method.