This is my take of a Salmon Pho I first ate in a San Francisco Noodle shop. Perhaps it's not 100% authentic, it is still an easy to prepare, delicious, healthy soup. 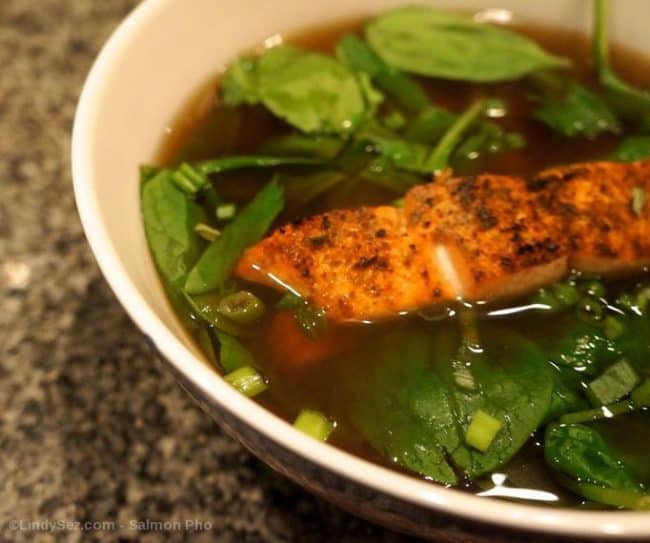 The making of Salmon Pho

Salmon Pho.  Or Salmon Faux Pho.  Is my Salmon Pho authentic enough to be real pho, or is it faux (imitation) pho?

My husband and I eat a lot of Pho (pronounced pha), so I will debate this question with myself because, while it's close to the pho I get in Vietnamese restaurants, it's different enough that I would not put it in the exact same category as an authentic Pho.  First of all, I take a shortcut in the broth, using a box of low-sodium beef stock.  A real pho takes a day of slow-cooking beef bones to come up with their flavorful broth.  Second, I add fresh spinach to the mix.  I have been to some restaurants where they put lettuce into the soup (soggy lettuce is not my fav); so that's close, but still no cigar.  Third, while I generally use rice noodles (traditional), at times I use buckwheat noodles (Japanese) or linguini (Italian), and that would defiantly not be authentic.

Is this an "authentic" pho? Probably not, but it's a darn good and healthy pho.

Most pho soups are made either with beef stock or chicken stock.  Add noodles, along with thinly sliced meats or seafood and it's pho.  The seafood soup is generally shrimps, scallop, calamari (squid), fish balls, and sometimes added sliced chicken or pork.  Beef pho can be any meat from a thinly sliced flank, tenderloin or brisket, to tendon and other fatty pieces of beef. My salmon pho uses a nice piece of wild salmon that has been seasoned, broiled to a medium-rare (it will continue to cook in the broth); the salmon breaks up nicely into the soup, so it's flavorful and delicious, and with the addition of spinach, has added health benefits.  I add the spinach raw as it will cook in the hot broth.

Salmon Pho, ready for some broth

The broth is really the most important part of this soup; so don't skimp when you make it.  It's going to take about an hour; a half-hour of a slow simmer, then another half hour, or more, to let it seep.  Just shut it off and let it set so all the flavors have time to meld.  Once you remove the aromatics of lemongrass, ginger, scallion, cinnamon, star anise, jalapeño, and a bit of cilantro, you will have a most flavorful stock.

This recipe calls for lime slices as well, I use that when I can't find kaffir lime leaves, which are very difficult to find.  Limes are pretty easy to find in most parts of the world, but if you don't have access to fresh limes, omit them altogether.

So now add your flavorful broth to your bowl and ... 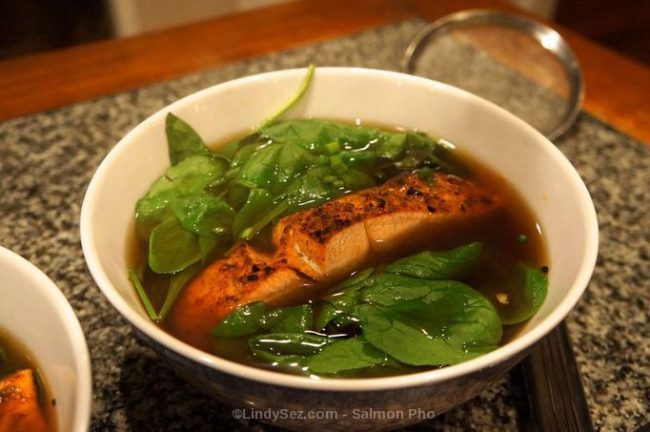 A delish bowl of Salmon Pho 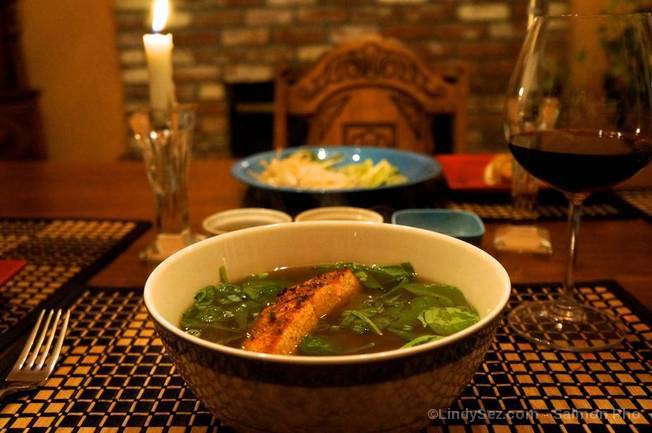 Putting in what you like, and how much is part of the fun of eating pho.

I served this with an Oregon Pinot Noir which worked not only with the fish but with the flavors of the broth. 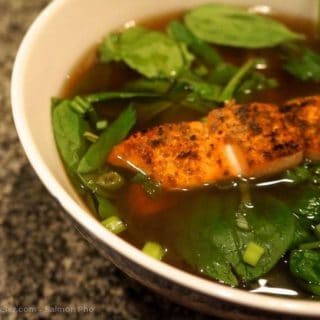