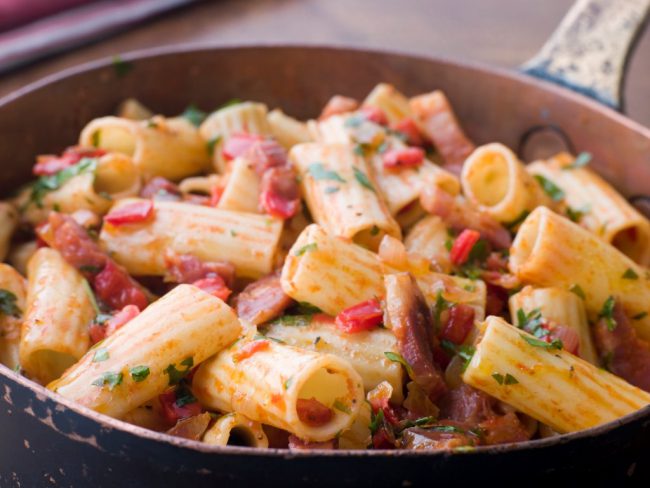 This recipe for Rigatoni with Roasted Peppers, Tomatoes and Pancetta is so easy. Add a salad for a complete meal in less time then it takes you to say “a table for four, please!

In a large saute pan, heat the oil over medium heat. Add the pancetta and allow to just start to brown, while rendering some of its fat, about 3 minutes. Add the onion and allow to cook until the onions are tender and translucent, 7 to 10 minutes.

While the onions and pancetta cook; slice or dice half of the roasted peppers. Place the other half in a blender or food processor; process with enough of the reserved pasta water to form a thin sauce.

When the onions are tender, add the pasta along with the tomatoes, sliced red peppers, and sauce. Toss until pasta is thoroughly heated through. Add red pepper flakes, if using, along with the parsley. Toss well; taste and adjust seasonings with salt and pepper. Ladle into wide warmed bowls and top with grated Parmesan, if desired.

The making of Rigatoni with Roasted Peppers, Tomatoes and Pancetta

During the week, I like to serve dinners that are uncomplicated.

Tasty, easy, and filling.  And this recipe for Rigatoni with Roasted Peppers, Tomatoes and Pancetta is one of those meals.

It’s so easy to prepare and with fewer calories and FAT than anything you can order at the Olive Garden or some other fast food restaurant.

A simple salad, such as Baby Greens with a Light Balsamic Vinaigrette completes the meal in less time then it takes you to say “a table for four please”.

While this recipe is called Rigatoni with Roasted Peppers, Tomatoes and Pancetta, you could make it with pasta other than rigatoni. I like the rigatoni because of its size and the way the shape allows all the flavors to get inside the macaroni. But it would also work with penne pasta or even farfalle, also known as bow-tie pasta, because of their ability to grab onto sauces.

Long kinds of pasta, such as spaghetti, linguine, or fettuccine, would work, just not as well.

The recipe calls for some diced Roma tomatoes which are available year round and not a bad choice when having to use tomatoes during the winter months. However, they can still be tasteless when not in season. Then it’s canned tomatoes to the rescue.

Canned diced tomatoes can make a good substitute in the winter months to replace fresh. If using canned tomato in the recipe, I would cut them up, or give them a few whirls in the food processor prior to adding them to the dish. Canned tomatoes I find do not break down the same as fresh. So break them down a bit at the start, or you will just have large chunks of tomato and not a nice saucy sauce.

Pancetta is an Italian style cured, but unsmoked, bacon. It generally comes in thick slices more resembling a roll than your typical American style bacon, or in thin slices and can be found in most major supermarkets or delis. If you can’t find pancetta, you could substitute bacon. Prepare the bacon by cutting it into pieces, boil some water in a saucepan then put the pieces into the hot water, off heat, and allow to seep for about 5 minutes. This will help neutralize the smoky flavors of the bacon.

Proceed with the recipe as written and in about 15 minutes time, you can enjoy a delicious homecooked meal that I think the whole family will love. You? Enjoy yours with a glass of red wine. 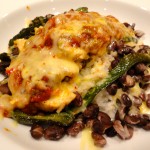 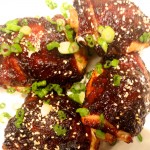 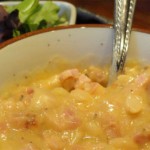 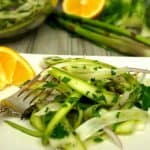