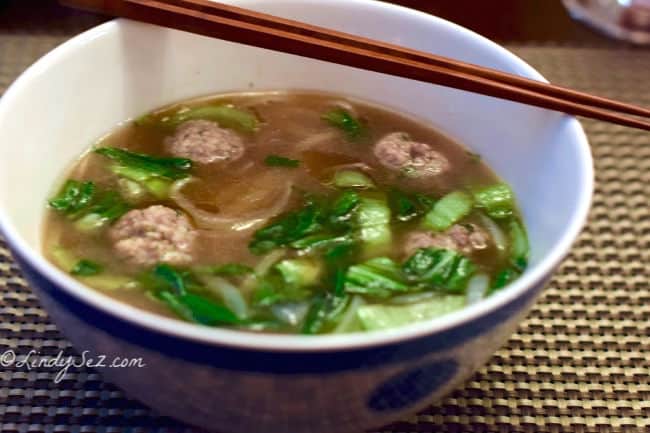 This recipe for Quick Pho with Ginger Pork Noodles came about because, well, cooking for two has its own set of challenges, and that is, what to do with left-over food. Seriously, other than a few dishes, it's hard to cook for just two people. There is always more than you can eat. And I'm not a big fan of reheating the same dish over and over, so I must come up with new ways to use my "excess" food.

While making our dinner of Ginger Pork Meatballs on Soba Noodles with Peanut Sauce, I realized I had way more meatballs than I needed. My first thought was to put the mixture in the freezer and then use it at some future date to make the same dish. But as they sat in the freezer I started thinking about other options. Other things these little meatballs might just be good in. And then it hit me, Pho Soup! Or maybe it's Faux Pho Soup. But regardless of what you want to call it, I thought it sounded yummy, so I proceeded down my merry little path of cooking.

Not me. So I came up with these easy "cheats" to make a rich-tasting Pho broth, without the hours of cooking time.  As a matter of fact, an hour will do you. And since it's mostly hands-off time, it's really a quick and easy broth - and will give your Pho soup just the right amount of deep flavor in a very short period of time. 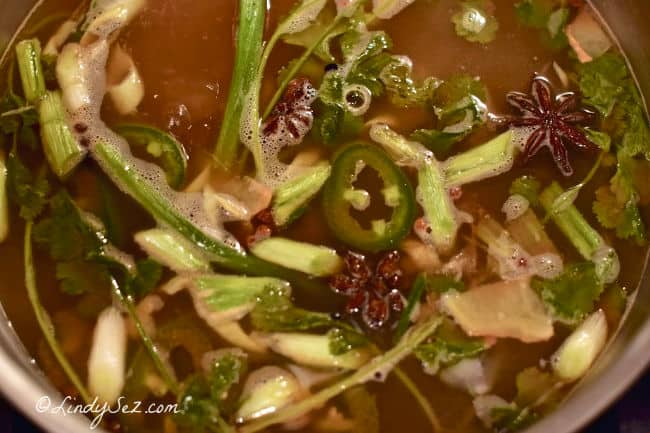 It's all in the aromatics.  Lemongrass, ginger, onions, jalapeno, cinnamon, star anise, and cilantro all simmer together for a short time, then they are allowed to just sit, and seep, melding their flavors.

Because this Pho included the deeply flavored Ginger Pork Meatballs, I thought that bok choy would hold up nicely. Bok choy is a type of Chinese cabbage that has a sweet cabbagy mustard flavor. Used in Chinese cuisine for centuries, bok choy not only adds great flavor and crunch but has many health benefits. Containing vitamins C, A, and K, it is also an excellent source of calcium, magnesium, potassium, manganese, and iron. Vitamin A, is essential for a properly functioning immune system, while vitamin C is an antioxidant that shields the body from free radicals. Bok choy supplies potassium for healthy muscle and nerve function, and vitamin B6 for carbohydrate, fat, and protein metabolism. 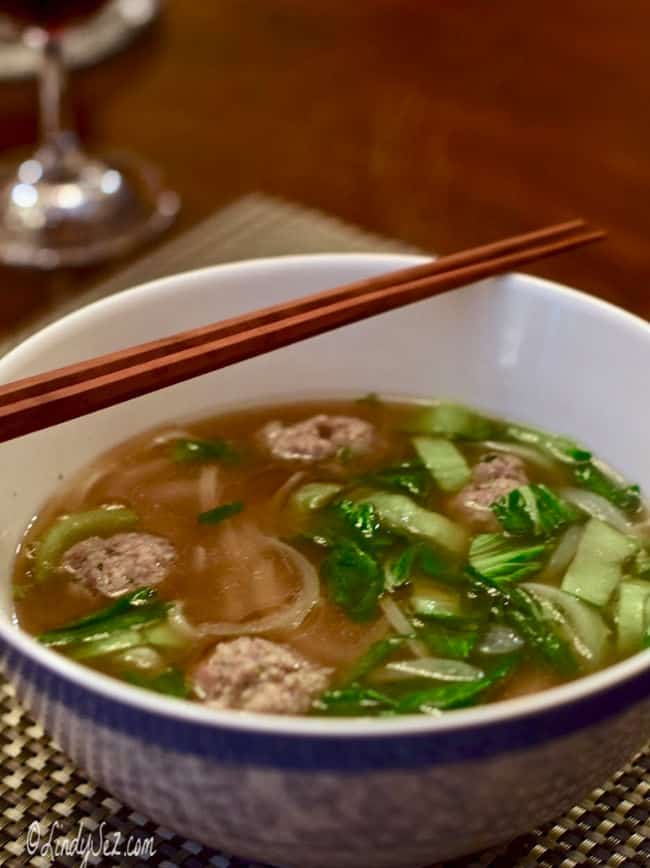 I like soba noodles. Their flavor is slightly nutty and being that they are made from buckwheat, they are gluten-free. Rice noodles have a neutral flavor, but also keep the dish gluten-free. Udon noodles are made of wheat, and while not gluten-free, they do offer a nice firm more chewy noodle. Whatever noodle you choose to use, cook them just under the package recommended cooking time as they will continue to cook in the soup. If you make them too soft to start with, you will have mush at the end. 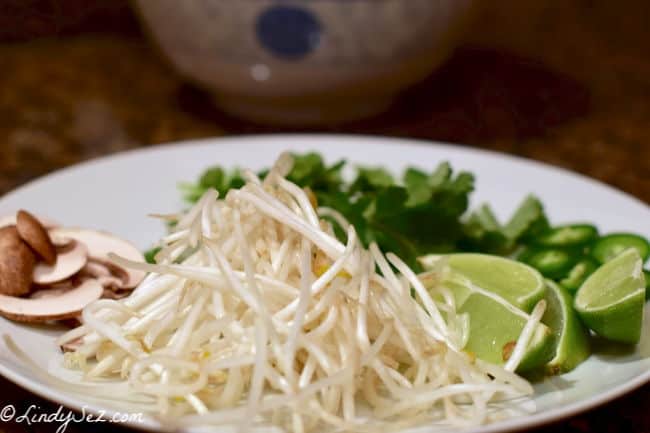 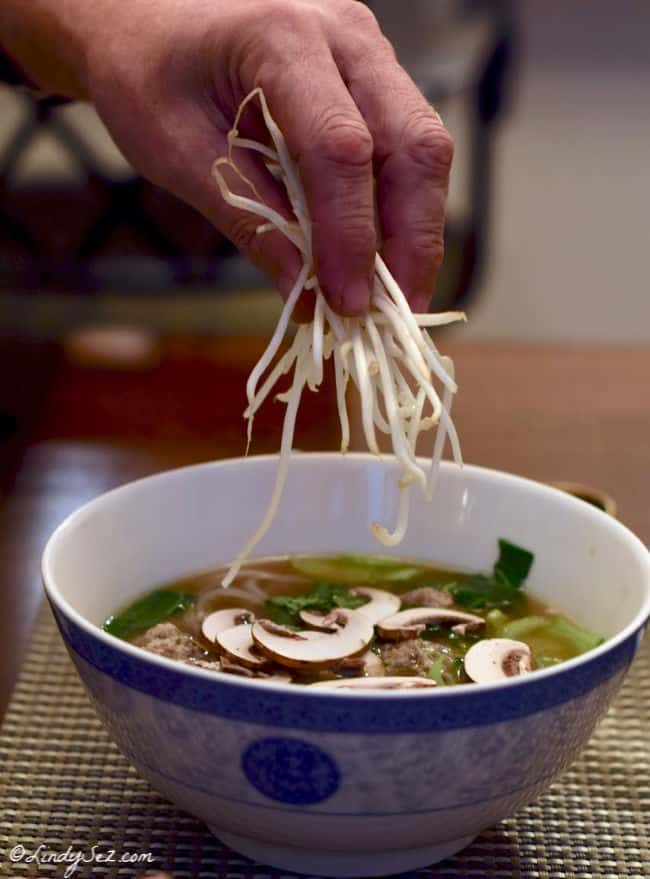 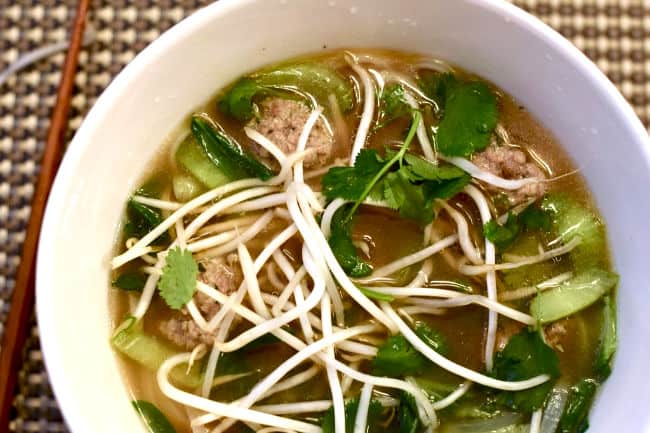 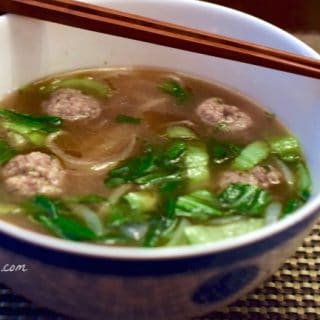 You can make a whole batch of the ginger pork meatballs and save half for another use, or just make a half recipe for this soup.
Keyword faux pho, meatball pho, pho
Tried this recipe?Let us know how it was!
« Rethinking Your Weight Loss Lifestyle
Braised Lemon Fennel Chicken Thighs »