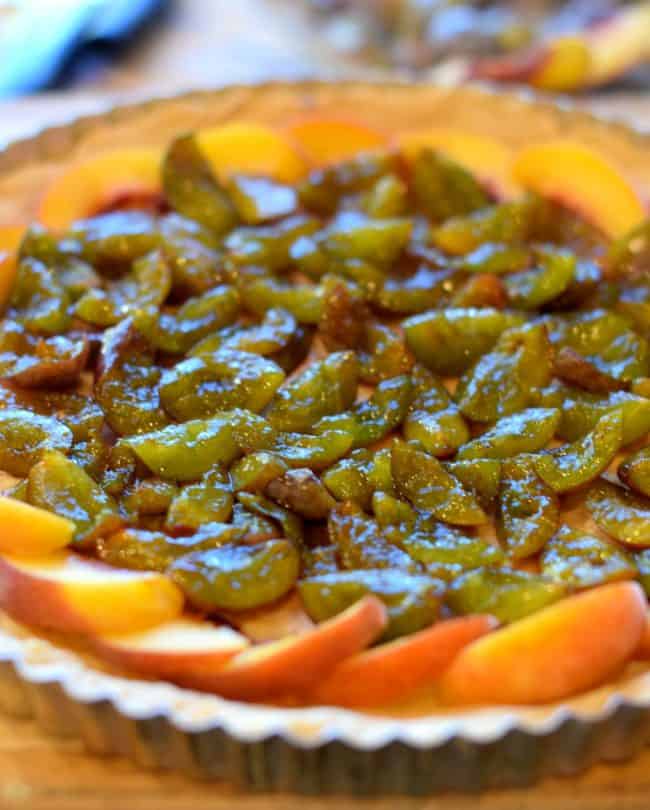 The making of French Plum Tart

Before the Napa and Sonoma valleys became famous for their vineyards of grapes and world-class wines, they were agricultural giants of a different kind. Apple, peach, apricot, pear, and nut trees grew in abundance. Even wheat was a major crop. But much of the land was covered in plum trees. French plums, also known as Italian or Sugarplums dotted the landscape in huge orchards. Mostly to make prunes.

Napa and Sonoma were known for prunes.

In the Napa Valley, almost all of the orchards have been converted into wine-growing vineyards. Ton for ton, $$ to $$, it only makes sense. While Sonoma County has many vineyards and also makes world-class wines, it still has a rich abundance of orchards producing some of the best apples and pears around. Plum orchards are not as prominent anymore, perhaps because of the prune, or "dried plum" as the California Prune Board tried unsuccessfully to name it, fell out of favor with American diets (it's still a wonderful dietary choice IMHO); but I happen to have a French plum tree in my backyard.

I didn't really know what type of plum they were so each year these plums would grow.

I never really did anything with them as they are quite small in size.  I'd let them sit on the tree, ripen, fall to the ground, rake them up and toss them in compost.

What a friggin waste!

This year I was determined to use them. 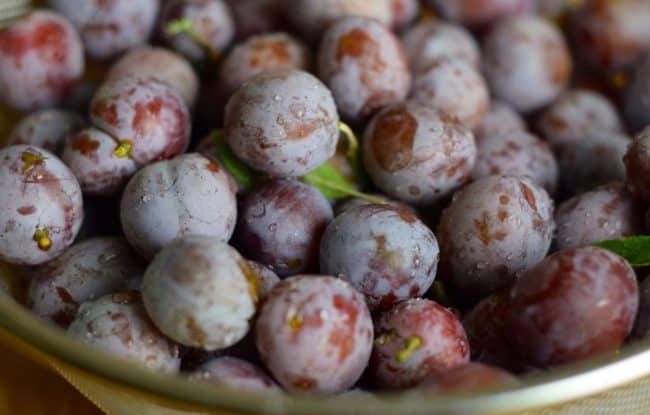 The skinny on the plums used to make this tart

These plums are extremely sweet but don't have a lot of juice. Guess that's why they make great prunes.

I remember when I was living with my Oma in Germany and she made a wonderful tart with some small plums.

I figured they much have been one and the same as the plums I had growing in the backyard, so...

I decided to make a French Plum Tart.

In honor of my Oma.

Well, perhaps then I should call it a German Plum Tart.

The crust of the tart

For my tart, I wanted a crust, that was buttery, flaky yet not a cracker or pie-like, with a tender bite. I decided on a modified shortcrust. Modified, because I did use a bit of leavening which is not generally used in a shortcrust, and an egg which can (in the French presentation) be used.

My crust was soft and very sticky, but I thought exactly what I wanted. 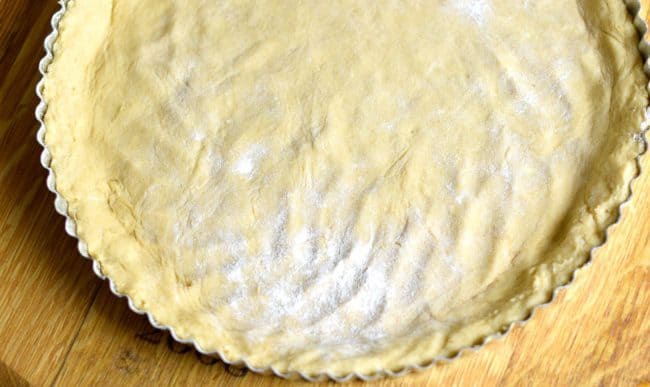 Using well-floured fingers is key to getting this into the tart pan and spread out.

The plums are so sweet and tasty I wanted to keep them as pure as possible, so I mixed a bit of sugar and pumpkin spice together and gently tossed a couple of tablespoons with the plums, taste, yum.

Because the sweetness of the plums may vary, and you might need to use a different plum than I did, use the amount of sugar in the recipe as a guide, not an exact. As I said, my plums were very sweet, I used a small amount of sugar. A tarter plum will need more sugar. Your personal sweet tooth may also want more or less sugar. TASTE and ADJUST. 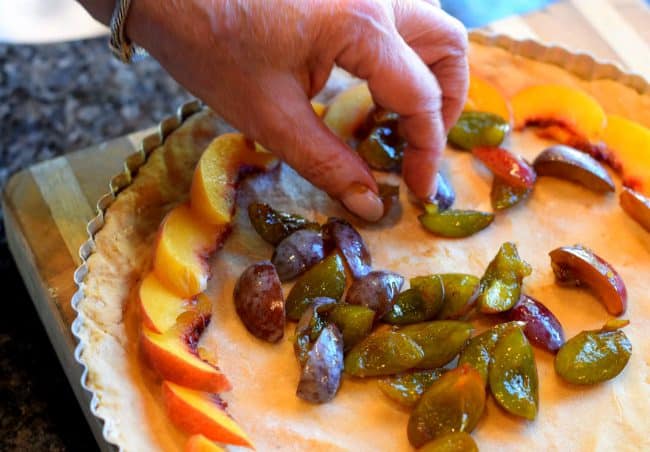 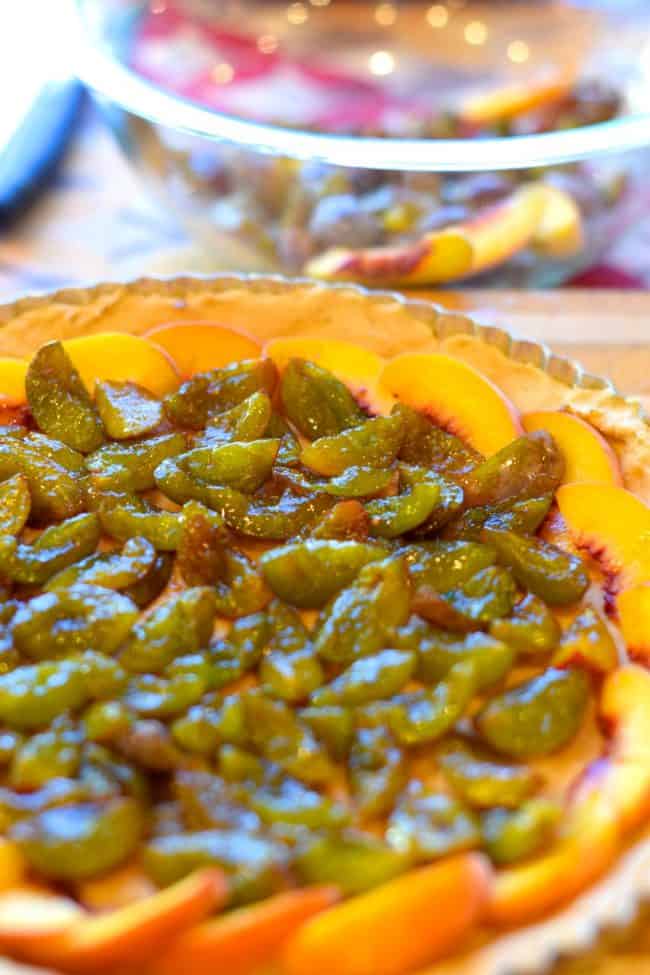 You can see how neatly I placed my plums...Not so much.

I had a couple of very ripe peaches on the counter and decided to use them as my border.

Nice and tasty, but completely optional.

If you happen to be lucky enough to have an excess of fresh apricots, try this delicious 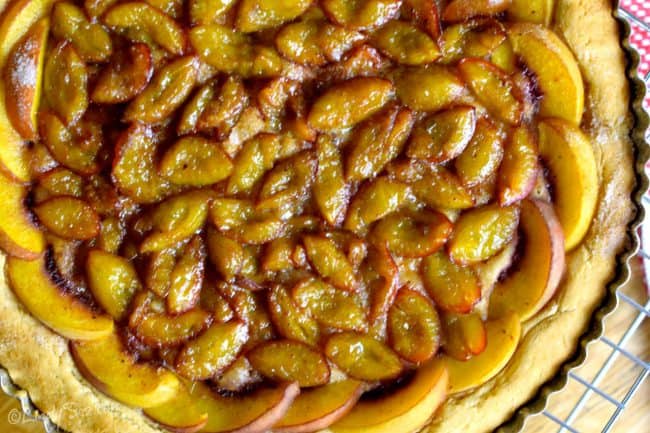 Pop the tart into the oven and cook it until the crust is lightly browned and the fruit is cooked, about 20 -25 minutes.

Now a word of caution on the time. My oven cooks faster than most. I know, how is that possible, are the laws of physics abandoned in your house, Lindy?

All I can say is, almost every recipe I cook in my oven requires about 5 minutes less than the minimum time in the recipe. Some recipes are more forgiving than others, but when looking for doneness, use your eyes and your nose. You should be able to see the crust is nicely browned, and your nose will help tell you when it's done as you will smell the deliciousness of the fruit coming through.

You know your oven, so just know that I say, my oven cooks FAST and you might need a few minutes more ... or less ... then what I state. Oven temperatures may vary. 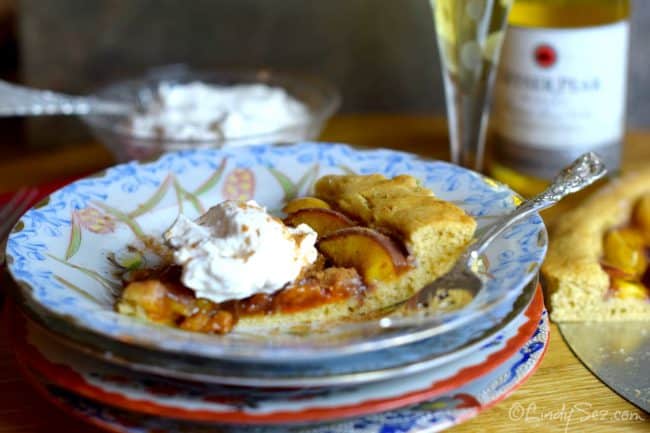 Let the tart sit at least 20 minutes, then cut and serve. Perfect with a dollop of whipped cream (and let's please use the real stuff, not the in the freezer chemical-based "cool" whipped topping) and a late harvest, "sticky" wine, such as a late harvest sauv blanc. 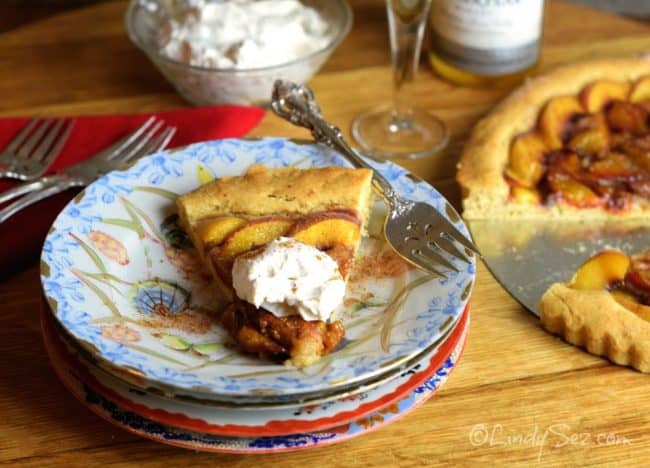 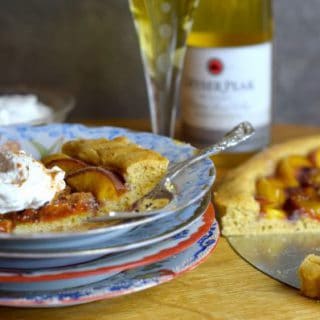 If you don't have a tart pan with a removable bottom, use a pie pan. Make sure to grease both the bottom and sides of the pan.
Keyword dessert, sugarplums, tart
Tried this recipe?Let us know how it was!
« Gazpacho
Zucchini Latke with Fresh Herbs and Feta »