"This delicious low-fat chicken tagine cooks skinless chicken thighs in a flavorful sauce made up from onion, garlic, ginger, cilantro, saffron, and lemon, then tops it with pungent preserved lemons, a variety of cured olives, and fresh thyme. Do remember the chicken does have to marinate, so allow for a couple of hours. Once that's done, it's about an hour to the table. Serve with steamed couscous, or if gluten-free, some Basmati rice"

The making of Chicken Tagine with Preserved Lemon, Olives and Thyme

I have a beautiful tagine.  It seems to mostly sit on the counter - which is a shame as tagines are so delicious. So I decided to break mine out and make this recipe - Chicken Tagine with Preserved Lemon, Olives and Thyme.

A tagine is a stew, it is also what the vessel is called that you use to cook the stew

Tagine is a classic dish from the region of North Africa known as the Magjreb - Morocco, Tunisia, and Algeria. A glorified stew comprised of aromatic spices, tender meats or veggies, simmered in sauces rich with herbs, fruits, honey. Almost all tagines have both sweet and savory flavors. This one is no exception.

So a tagine is a stew. It is also what the traditional pot is called in which you make the stew: a shallow earthenware vessel with a conical lid that traps the moisture and returns it to the food, resulting in perfectly cooked, flavorful foods that use very little additional liquid - intensifying the flavors.

As I said, I have a beautiful tagine. 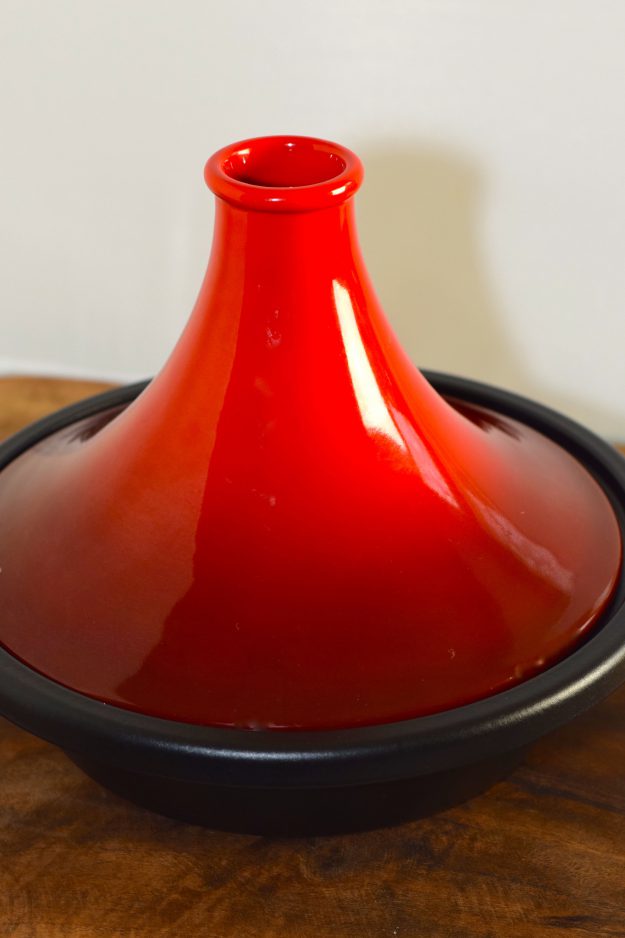 Not only is it pretty to look at, but it's also practical. 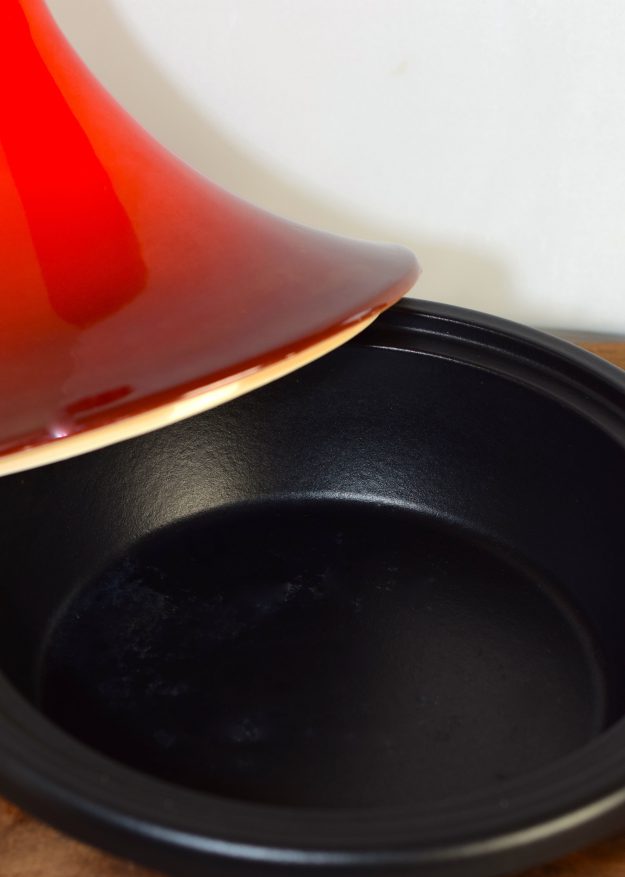 Made by Le Creuset it boasts a cast iron base which makes browning a snap. When I saw, and then bought my first tagine, I didn't know much about them and bought one that was meant for serving. The instructions said it could be used in the oven, but not on the stovetop. This meant I needed to brown my food in another pan, which means, of course, an extra dirty pan to wash. And me? I like to use the least amount of dishes as I can.

I love to cook.

Cleaning up after. Not so much.

The secret to cooking in a tagine is to simmer over low heat; allowing the flavors to build.

And as I said, the conical top allows the moisture to return to the food being cooked inside.

However, you can still make this dish, even if you don't have a tagine, and don't choose to buy one.

A heavy pot with a tight-fitting lid or Dutch oven will work too. You may just have to check the level of liquid periodically to make sure you still have enough juice.

But if you do decide to buy one, be sure to get one that is rated to use on top of the stove, not just be a pretty face. 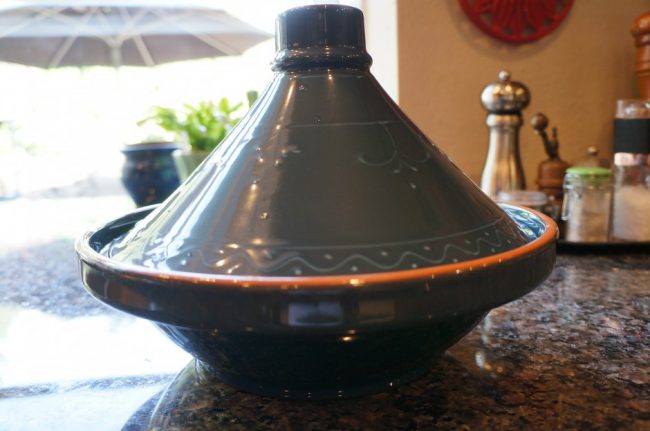 Preserved lemon is key to this dish

This recipe also uses another North African staple - preserved lemon. Preserved lemon is a slightly tart, slightly sweet, lemon that has been brined in salt and water while releasing and seeping in its own juices.

While fairly simple to make yourself, it does take at least a month to get the final results, so if you don't plan ahead...well, there are many good commercially made preserved lemons that you can buy at specialty stores or in many of your better supermarkets.

I got some great ones at Trader Joe's and those are what I used in this dish. If you get the ones that are brined in halves or quarter pieces, I would remove the center of them and only use the peel. The ones I got were slices, so I just cut them into halves and threw the whole pieces in without removing the pulp. The pulp ended up melting into the sauce - adding flavor. 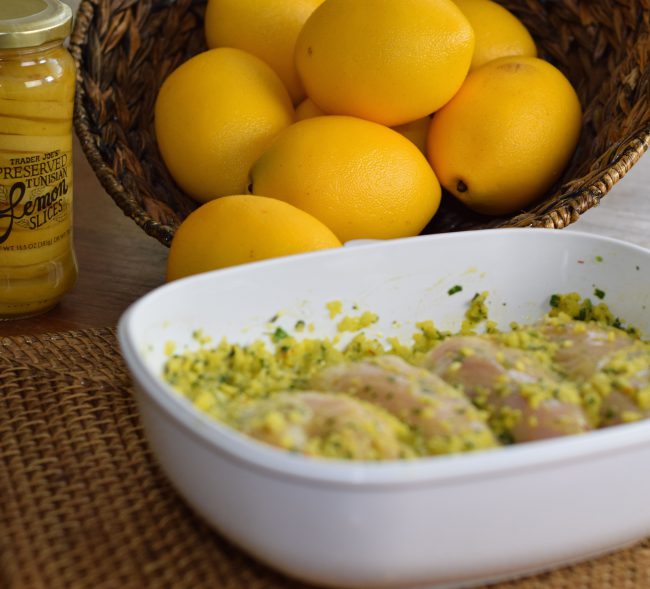 So we start with marinating our chicken thighs. Keeping with the "cooking lighter" approach to cooking, I removed the skins. You don't have to, but do realize two things - 1. Most of the calories and fat are in the skin. 2. The skin is just going to get soft and flabby anyway, and we don't like soft and flabby skin on our chicken anymore then we do on our upper arms, so if you can get rid of it, get rid of it. 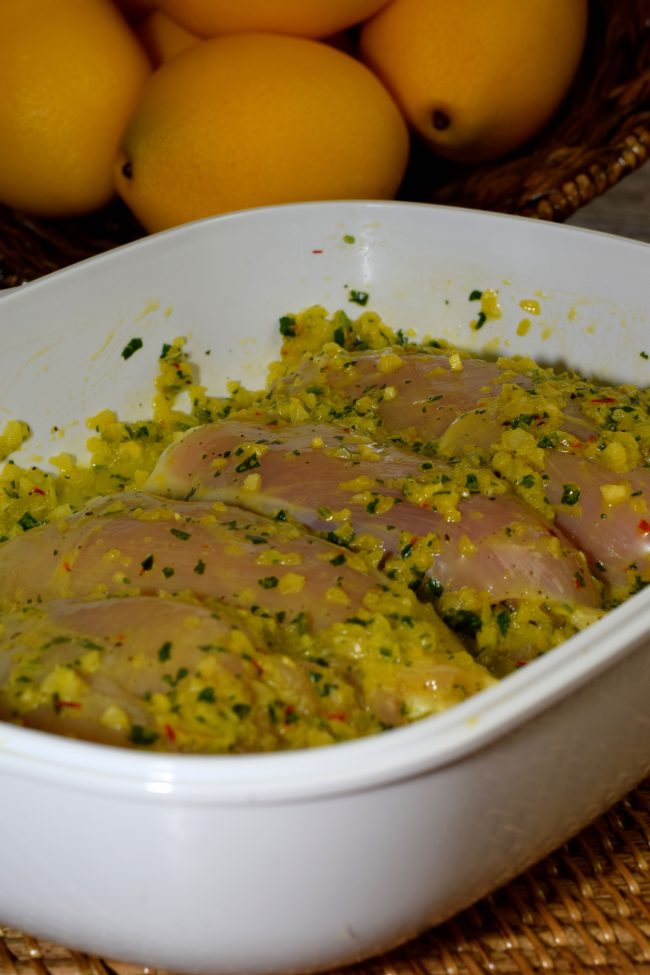 The chicken thighs will marinate anywhere from 1 -2 hours in a marinade of onion, garlic, fresh ginger, cilantro, saffron, and lemon juice.

The acids in lemon juice, as we have learned from other brines, changes the texture of meats, so don't let it sit longer than 2 hours.

Better a bit less, than too long.

And removing the skin has a third advantage, all this flavor can really penetrate into the meat infusing it with loveliness.

And don't start with the high cost of saffron. Trader Joe's and The World Market both sell reasonably priced saffron.

If you want really good saffron to cook with, do like I do and ask for it as a gift. Let someone else pay for it. Makes it taste even better...

On to the finish

So after you have done the marinade time, it's time to cook.

Brown the meat, add the marinade to the pan along with some water, then top with half of the thyme.

I use fresh thyme as it grows in my garden year-round. Fresh is so much better than dried and it's so easy to grow...even if you are in the middle of winter in Maine, you could grow fresh thyme in a sunny window.

Whenever I'm simmering a dish that calls for thyme, and I'm using fresh, I don't even bother taking it off the stick.

The leaves will cook right off into the food, and the sticks are easy to grab and remove before serving.

So after about 45 minutes of slow cooking on the stovetop, it's time to add the preserved lemon and olives.

Traditionally the olives should be green cracked olives, but even with my resources on short notice, I couldn't find any so I bought mixed Mediterranean and used those ... they worked just fine. 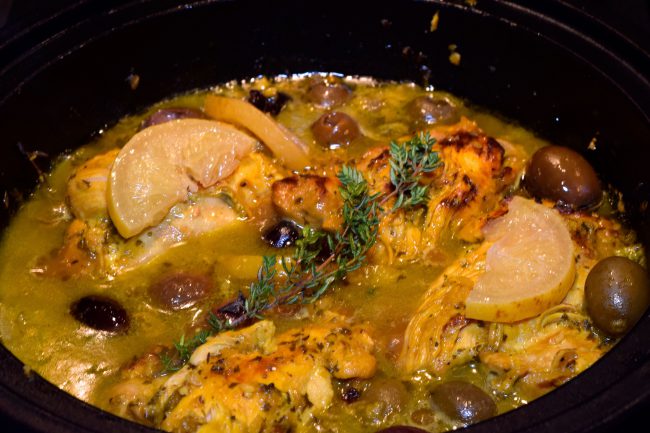 What to serve with Chicken Tagine with Preserved Lemon, Olives and Thyme

Tagines are traditionally served with flatbreads and/or couscous. Couscous is tiny semolina granules.

If you want to keep this dish gluten-free, serve it with Basmati rice or quinoa. 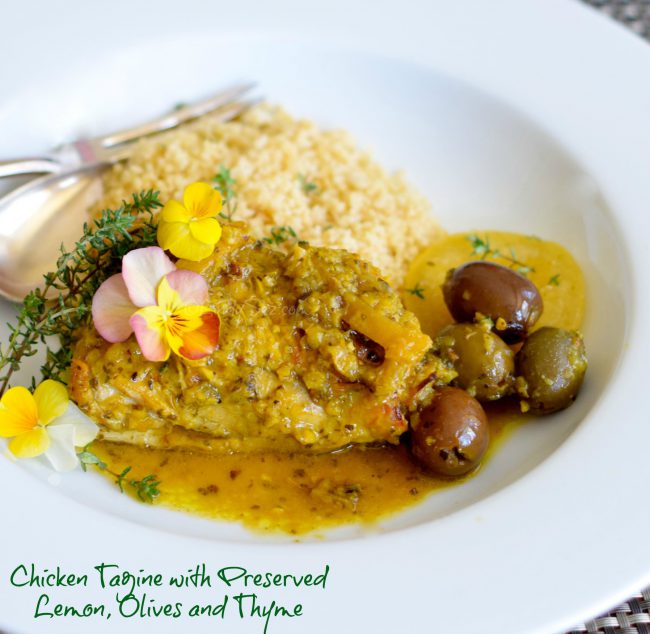 Wine Recommendation: The slightly tart sauce and preserved lemon, coupled with earthy olives and fresh fragrant thyme made this dish a perfect pair with a Pinot Grigio or Sauv Blanc which both boast a slightly lemon background with fresh fruit-forward. 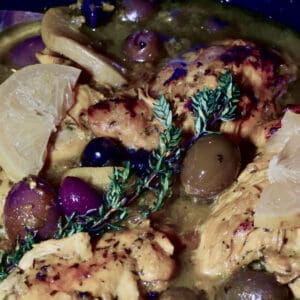 Do not marinate for more than 2 hours or the texture of the chicken will be compromised.