Behind the making of Cheesy Grilled Baby Bells

Had another fun night with a neighborhood progressive dinner party last week, and this time I was appetizers.

You might think this would be the "easy" course, I sure did, but it's not. Not if you want it to be interesting and to make just enough food to get the party going, but not so much as to fill everyone up.

I wanted to make some really tasty and yet not too filling foods; so I went to my cookbook collections and lo and behold, I have a little binder of Cindy Pawlcyn's Appetizers - so I grab it and start flipping through the pages, marking recipes I thought might be good for the party.

Cindy Pawlcyn is a well-known chef in northern California, having opened a number of restaurants in San Francisco and the Napa Valley. She, like Alice Waters of Chez Panisse, was one of the forerunners of farm-to-table cooking; using fresh, local ingredients whenever possible. The way I like to cook.

So I decided to make a few of her recipes, well, her recipes with slight modifications, for the appetizer course. One I choose is her recipe for Goat Cheese-Stuffed Gypsy Peppers - but I'm going to use those cute little baby bell peppers in place of the Gypsy pepper.

As all good cooks do, the first thing I do is read through the recipe. Wait a minute.  These are called Goat Cheese-Stuffed Gypsy Peppers - but where's the goat cheese? 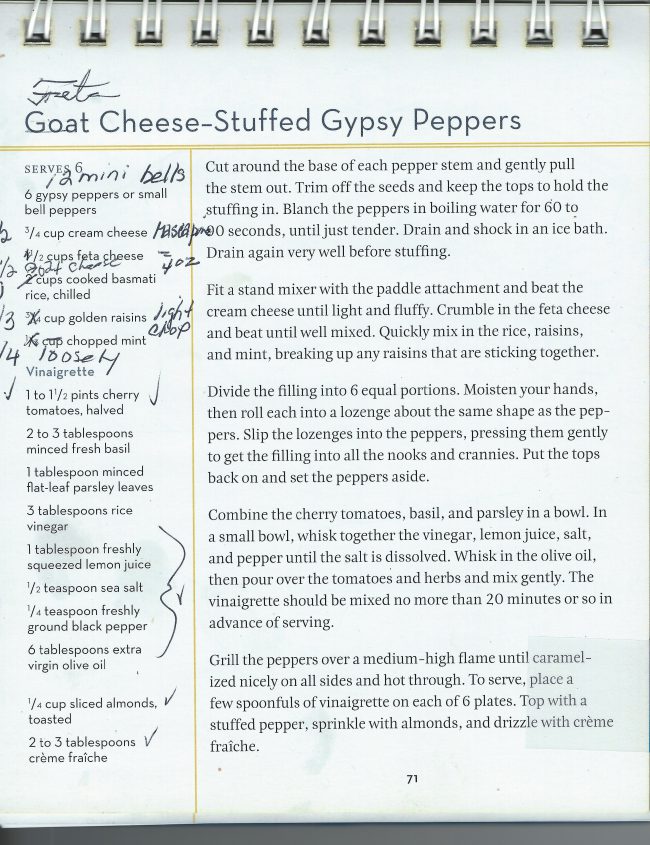 The original recipe with my slight modifications

Cream cheese we know comes from a cow.

And feta is more known as a sheep's milk cheese - actually, most feta is only sheep's milk, although some makers might use a bit of goat milk in the making of it, it's not that common or that known.

So then why not call them Feta Cheese-Stuffed Gypsy Peppers?

So the first modification I make to the recipe is to add some goat cheese to the goat cheese stuffed peppers.

The second is to use mascarpone instead of cream cheese, to give it a touch of sweet.

And I'll add some feta in for good measure.

I also used a bit less mint and rice, and lightly chopped the golden raisins so they would blend into the cheese better. OK...ready to go.

After gently slicing the tops from the peppers, I give them a quick blanch in boiling water, only about a minute, and then stuff them with the filling.

The recipe says to keep and replace the tops of the peppers after filling to "keep the cheese in" so that's how I do it. I actually left a bit of a hinge on mine so I would know which top belonged to which pepper. 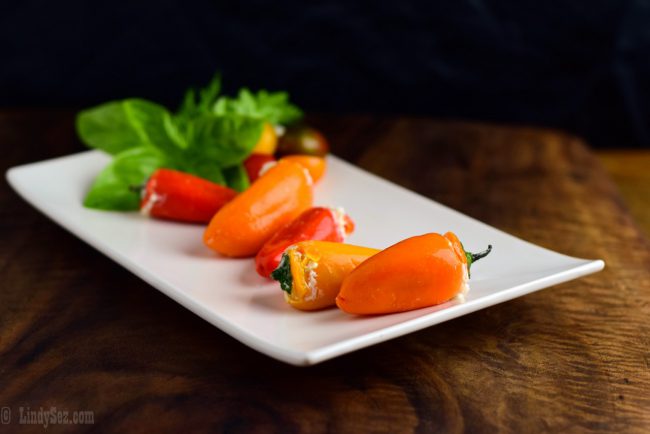 So cut tops, blanch, ice bath, stuff, put tops on, and take a picture. OK. You don't have to take a picture. Then after heating the grill to high, place the peppers onto the grid and grill them, turning them, until nicely caramelized and hot.

So much for taking such care with the tops, they all popped off anyway. But the cheesy filling stayed deliciously inside.

I honestly didn't find that the dressing or the tomatoes added anything to the dish.

So while I made it this time, I wouldn't do it in the future. If you want to try it with, the dressing directions are on the original recipe above, but not on mine.

So after you've done your grilling, try and find the tops and stick them back on, or not and then serve these up and cut into their cheesy grilled baby bells goodness. 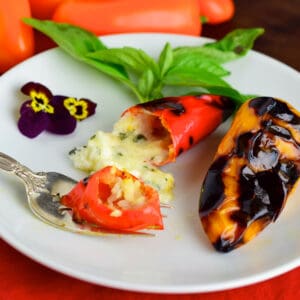