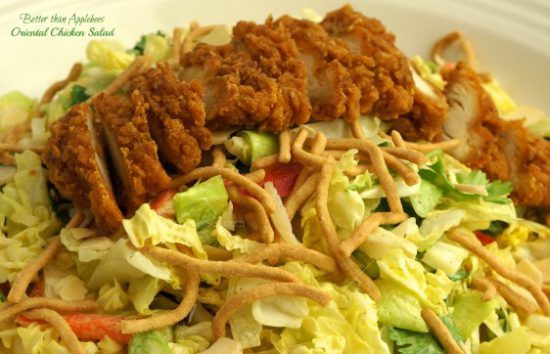 The story behind Better than Applebees Oriental Chicken Salad

I know. It’s not hard to be better than Applebees. But I do admit, their Oriental Chicken Salad is one dish I will eat when I’m out and about and wanting something to eat that is not Thai, Pho or Sushi.

I generally go to Applebee’s when I’m on my way to Trader Joe’s and decide that I’d better eat something before I go in and shop. You know, shop on a full stomach so everything doesn’t look so good. As I wrote in my article – The Good, the Bad and the Ugly Truth About Salads,  Applebees Oriental Chicken Salad, as served, has a whopping 1398 calories and 98 grams of fat.

No, that’s not a mistake. It’s the actual number of calories and fat. So even while I order my dressing on the side, and use the fork dipped in the dressing method of eating, I’m sure I’m still consuming more fat and calories then I would if I made it myself.  And I could add more of what I wanted (healthy veggies) and less of what makes it so full of calories and fat – their dressing, the fried noodles, and almonds. So I came up with my Better than Applebees Oriental Chicken Salad. Using the same amount of chicken tenders that I purchase from the deli counter (210 calories, 10g fat) and my Low-Fat Honey Mustard Dressing (61 calories, 4g fat) well … you do the math. My Better than Applebees Oriental Chicken Salad is full of healthy cabbage and lettuce, with a light sprinkle of almonds and chow mein noodles. It has all the flavor of the Applebees salad with only about 500 calories and 29g fat. Of course, most of the fat is due to the fried chicken tenders. I suppose you could make this with grilled chicken, but it wouldn’t be the same. It would be Different than Applebees Oriental Chicken Salad. And I  like the original. So I’m sticking to fried chicken tenders.

This salad was perfect the other night when the temperatures soared into the 100’s and I didn’t want to turn on any kind of fire, anywhere. Not the stove, not the oven, not the outside grill. This salad is just chopped, toss and eat.

Ah yes…Summer living at its best; eating a delicious salad on the patio, with a nice refreshing Pinot Gris. Easy clean-up too!

In a large bowl mix together the Napa cabbage, coleslaw mix, lettuce, bell pepper, onions and cilantro leaves with just enough dressing to lightly coat them. Divide the salad into two large serving plates. Cut the tenders thinly and place on top of the salad, (save remaining dressing in the refrigerator for another use) then sprinkle the Chow Mein noodles and almonds over the top. Serve with additional dressing on the side, if desired. 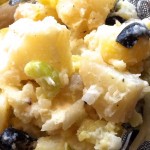 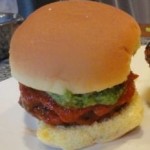 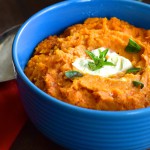 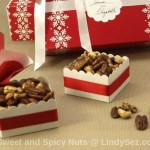