That's what I asked my husband when he handed me a bag of them that someone at work obviously gave him when they had no clue what to do with them.

Ah yes, I do love a challenge. And looking online I found very little information on Quince.

So I cut one open and looked inside. Then I tasted it.

Not so good. Kind of astringent, with a slightly spongy flesh. Large seed pod. Not a particularly good looking fruit, but I've seen worse.

quince are the sole member of the genus Cydonia in the family Rosaceae. 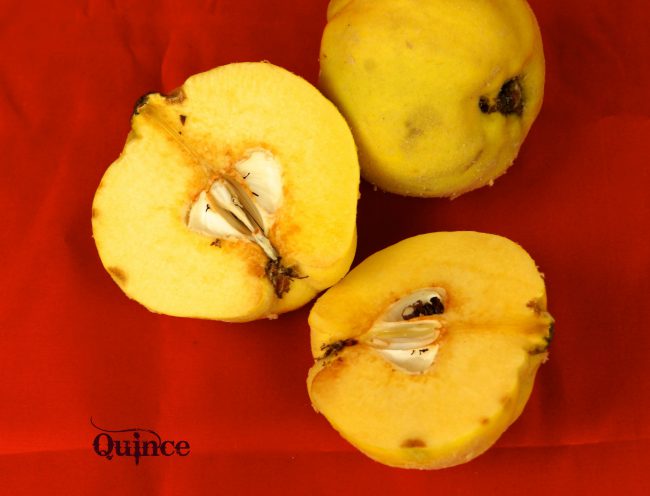 I turned to my Library of Cookbooks. Mark Bittman states in his book How to Cook Everything Vegetarian that Quince is a member of the apple family, tastes like a pear, and is in season from October to December.

Well, I can tell you true, they do not taste like a pear. Or an apple. They taste like a quince. As I said above, slightly astringent, with a flowery acidic after taste.

It appears from my sources at Wikipedia that quince is the sole member of the genus Cydonia in the family Rosaceae (which also contains apples and pears). So while not entirely interchangeable, they are edible.

I did find a recipe for a Quince Stew on Epicurious.com that is a Persian dish. The author stated that the core of the quince must be removed entirely or it will be hard as a rock when cooked. So while I found the overall recipe uninteresting, I did learn something. And since I knew I didn't want to make jam, jelly, quince butter or bake a pie, the idea of stewing it was a sound one.

So I stewed it. In a savory middle eastern type of stew.

And it was delish. 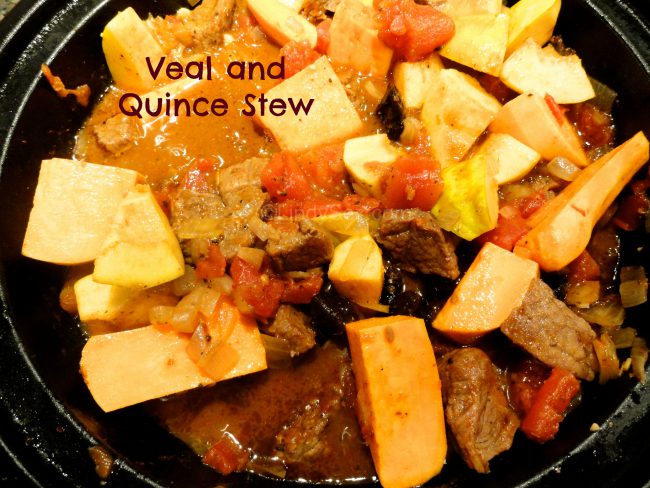 I'm fairly certain you will not find Quince in your local supermarket, but if you happen to see them at your Farmer's Market or a farm stand, or even perhaps, a tree by an older property; grab some and try them. I think you might actually like them. Cooked.

What to look for when choosing Quince

Choose quince that are yellow in color, with good smell. Avoid ones that are soft, mushy or have brown spots.

Store quince at room temperature for up to a week. They will keep slightly longer in the refrigerator, up to four weeks. Loosely wrap them in plastic or a zip-top bag. Like apples, quince gives off ethylene gas which will make other fruits nearby ripen quicker. So if you don't want your avocado to over ripen, don't store it near the quince. However, if you do, then do.

Rinse the quince underwater. Remove any brown spots then cut into halves and remove the core with the pits. Quince does not have to be peeled, which is a good thing as they are not smooth. If you want to peel them, the best method is to quarter it, then using a paring knife, remove the skin.

Quince can be stewed, roasted, made into jelly or marmalade, or a compote. Quince is cooked when a knife can easily be inserted into it.

BTW - My chickens, they don't like raw quince either. 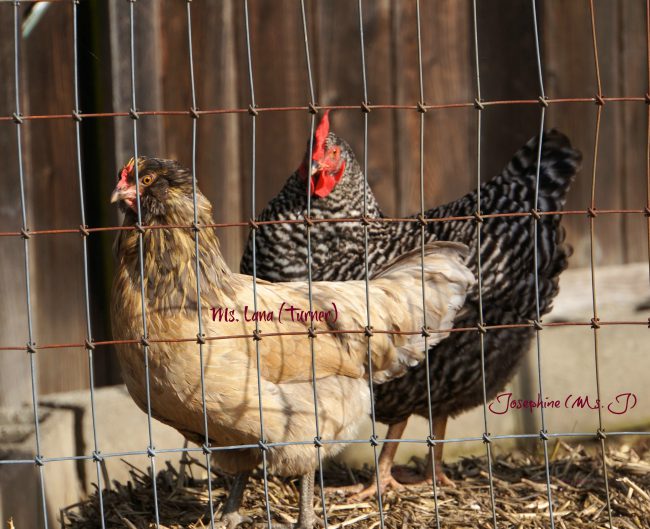