Snapper with Shrimp Creole Sauce starts with a Creole trinity of onions, celery, and green pepper, then adds some spice and salad shrimp.  Pour it over a crispy fillet of fish and you have a wonderful low-fat delicious dish, easy enough for every day, good enough for company 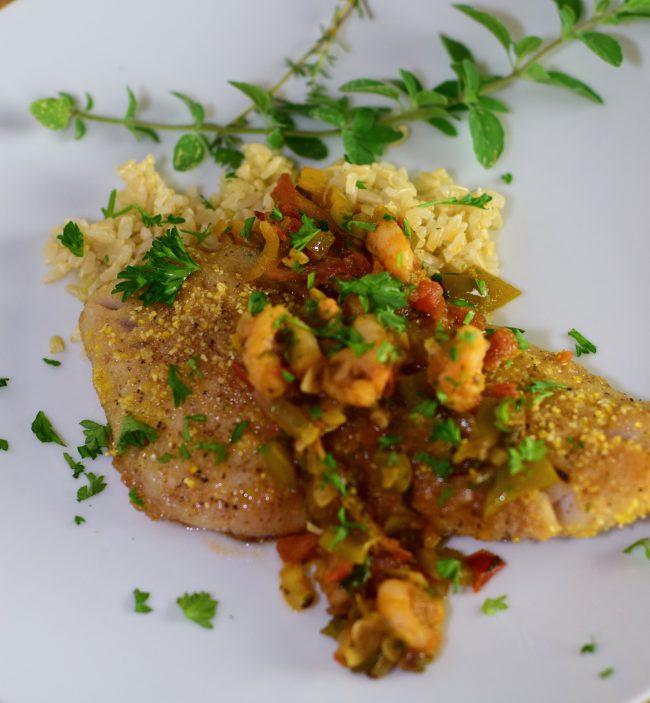 The making of Snapper with Shrimp Creole Sauce

BB loves those little salad shrimps on salads. He also loves to over-buy when I send him to the grocery store. If I tell him I need one lemon, he'll come home with three. So when I make my recipe for Butter Leaf Lettuce with Shrimp and Fresh Herb Dressing and send him to the store for a quarter-pound of salad shrimp, he'll come home with ¾ pound instead - leaving me to find new ways to use the left-over pre-cooked shrimp. This recipe for Snapper with Shrimp Creole Sauce is one of my solutions for excess shrimp, although I think it is totally fresh-bought pre-cooked shrimp-worthy.

WHAT IS THE CAJUN TRINITY?

Many (most) cuisines have their own trinity of vegetables to start a dish, often called a mirepoix.  A mirepoix is simple a combination of generally three ingredients that add the flavor essence of the cuisine. For the French, it's onion, carrot, and celery. For Spain, it's called a sofrito which is a combination of onions, garlic, and tomato. This recipe starts with the Creole trinity,  chopped onion, green bell pepper, and celery. The peppers must be green to add the true flavor for a Creole dish. Red, yellow, and orange peppers are lovely peppers but are just too sweet to get the true Creole flavor.

SNAPPER WITH SHRIMP CREOLE SAUCE IS QUICK AND EASY

After a quick sauté of the vegetables, add some fresh chopped tomato if it's summer and you can get some nice fresh tomato. I grow them every summer in my garden. If you don't have a garden or fresh tomatoes, (or it's in the middle of winter) canned work perfectly well. If you do use canned diced tomatoes, chop them up a little more finely than what comes in the can. You want the tomato to melt into the sauce. Then add a bit of fresh or dried thyme and oregano, a few dashes of Worcestershire sauce, cayenne pepper to give it a kick, and some chicken stock to make it saucy. Once these have cooked for a few minutes, about 5 - 7, add the shrimp and just stir them gently around to get them hot and well coated in sauce. They are already cooked, they are small, it doesn't take long. 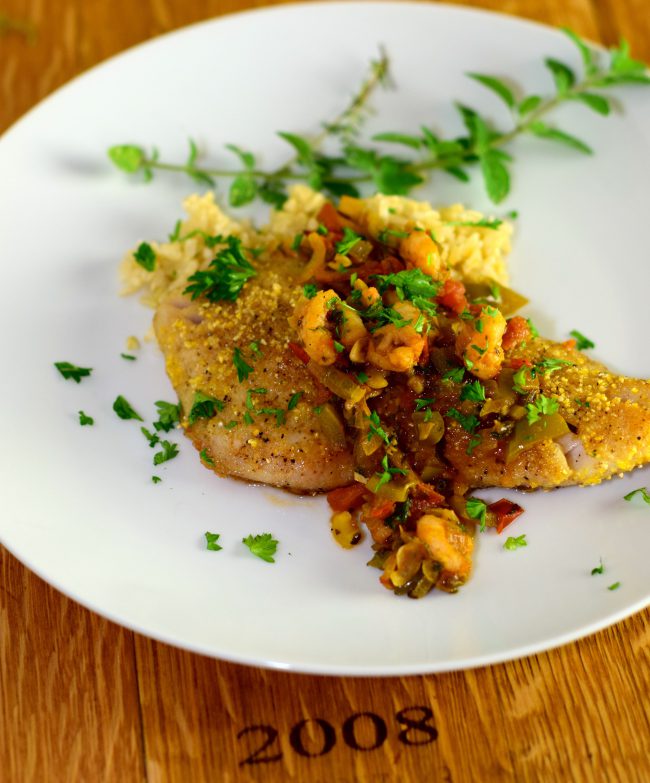 I used snapper (sometimes called rock cod) in this dish, but you could use another white fish in its place. Whatever you use, make sure the bones are all removed, nothing worse than taking a bite of fish and getting a mouthful of bones that you have to gracefully extract. The combination of cornmeal (I used coarse cornmeal) and flour give the fish a nice coating and crunch. You may notice I didn't use salt on the fish as the Slap Ya Mama seasoning mix has plenty.  If you find the cornmeal/flour mix is not adhering well to your filet, try spraying the seasoned filet with a little non-stick cooking spray to help it stick.

Snapper doesn't take long to cook as the filets are generally less than a half-inch thick, so it's important that your pan and oil are hot so the coating gets crisp by the time the fish is cooked, not soggy. Soggy coating is not good.

I served this with some brown rice and steamed fresh broccoli, although the broccoli missed the photoshoot. 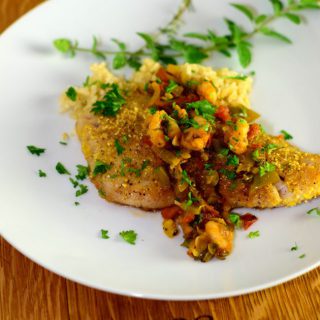 *Slap ya Mama is a Cajun Seasoning that is easily found in most markets. If you don't have any or don't wish to purchase it, it's a combination of salt, red pepper (cayenne), black pepper, and garlic powder. You could use all flour or all cornmeal. Or even fine bread crumbs.